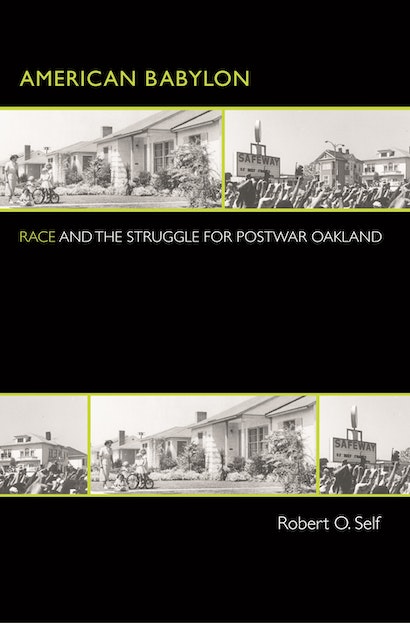 As the birthplace of the Black Panthers and a nationwide tax revolt, California embodied a crucial motif of the postwar United States: the rise of suburbs and the decline of cities, a process in which black and white histories inextricably joined. American Babylon tells this story through Oakland and its nearby suburbs, tracing both the history of civil rights and black power politics as well as the history of suburbanization and home-owner politics. Robert Self shows that racial inequities in both New Deal and Great Society liberalism precipitated local struggles over land, jobs, taxes, and race within postwar metropolitan development. Black power and the tax revolt evolved together, in tension.

American Babylon demonstrates that the history of civil rights and black liberation politics in California did not follow a southern model, but represented a long-term struggle for economic rights that began during the World War II years and continued through the rise of the Black Panthers in the late 1960s. This struggle yielded a wide-ranging and profound critique of postwar metropolitan development and its foundation of class and racial segregation. Self traces the roots of the 1978 tax revolt to the 1940s, when home owners, real estate brokers, and the federal government used racial segregation and industrial property taxes to forge a middle-class lifestyle centered on property ownership.

Using the East Bay as a starting point, Robert Self gives us a richly detailed, engaging narrative that uniquely integrates the most important racial liberation struggles and class politics of postwar America.

Robert O. Self is assistant professor of history at Brown University.

"[A]n original and complex explanation for the urban crisis that transformed Oakland, California, from 1945 to 1978. . . . By placing the history of Oakland and its African American community in a new theoretical framework that emphasizes suburban growth, tax revolts, and battles over land, jobs, and political power, Self has challenged historians to reconsider the way that they study postwar black urban communities."—Albert S. Broussard, Journal of American History

"[M]eticulously researched. . . . [A] compelling, complex, and original account of black and, to a lesser extent, white community politics in metropolitan Oakland California from 1945 to 1978."—Cynthia Horan, Annals of the American Academy of Political and Social Science

"By placing the history of Oakland and its African American community in a new theoretical framework that emphasizes suburban growth, tax revolts, and battles over land, jobs, and political power, Self has challenged historians to reconsider the way that they study postwar black urban communities."—Albert S. Broussard, Journal of American History

"If you are concerned with the postwar city, race, economics, and politics, get this book and read it."—Kenneth Durr, American Historical Review

"American Babylon traces the dialectic of suburbanization and black power in my hometown of Oakland, California. Encapsulating the postwar history of hundreds of mid-sized American cities, Robert Self's original and fascinating case study historicizes city-suburb racial segregation as a creation within living memory. We cannot heal or make sense of the nation we live in now without American Babylon."—Nell Irvin Painter, Princeton University, author of Southern History across the Color Line

"American Babylon promises to be one of those rare works that redefines the field. Robert Self brilliantly weaves together histories that are usually told separately: political economy, labor, black community formation, suburbanization, and civil rights. His analysis of the relationship between 'black power' and 'white power' opens up a new way of thinking about race, economics, and politics in modern America."—Thomas J. Sugrue, University of Pennsylvania, author of The Origins of the Urban Crisis

"By grounding his historical narrative in its spatial context, Robert Self offers a new conception of postwar urban history and also of national political history, making it possible to map the relations of social and political power. He has moreover broken free of a traditional limitation of urban histories: rather than limit himself to a single municipality, he tells the story of an entire metropolitan region. This very readable book promises to be highly influential in the fields of urban history, postwar political history, and African American and race relations history."—Philip J. Ethington, University of Southern California, author of The Public City