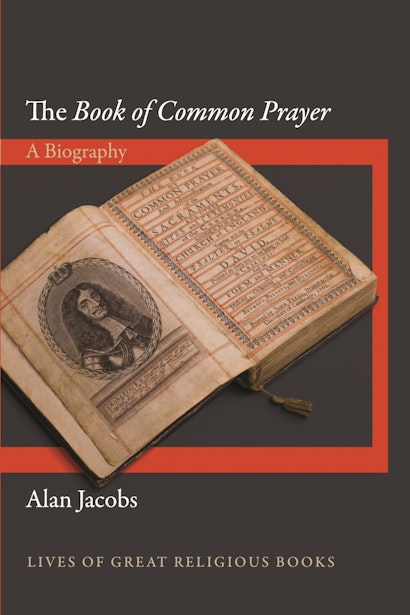 While many of us are familiar with such famous words as, “Dearly beloved, we are gathered together here…” or “Ashes to ashes, dust to dust,” we may not know that they originated with The Book of Common Prayer, which first appeared in 1549. Like the words of the King James Bible and Shakespeare, the language of this prayer book has saturated English culture and letters. Here Alan Jacobs tells its story. Jacobs shows how The Book of Common Prayer — from its beginnings as a means of social and political control in the England of Henry VIII to its worldwide presence today — became a venerable work whose cadences express the heart of religious life for many.

The book’s chief maker, Thomas Cranmer, Archbishop of Canterbury, created it as the authoritative manual of Christian worship throughout England. But as Jacobs recounts, the book has had a variable and dramatic career in the complicated history of English church politics, and has been the focus of celebrations, protests, and even jail terms. As time passed, new forms of the book were made to suit the many English-speaking nations: first in Scotland, then in the new United States, and eventually wherever the British Empire extended its arm. Over time, Cranmer’s book was adapted for different preferences and purposes. Jacobs vividly demonstrates how one book became many — and how it has shaped the devotional lives of men and women across the globe.

Alan Jacobs is Distinguished Professor of the Humanities in the Honors Program at Baylor University. He is the author of several books, including The Pleasures of Reading in an Age of Distraction (Oxford) and Original Sin: A Cultural History (HarperOne), and he has edited W. H. Auden's long poems For the Time Being and The Age of Anxiety (both Princeton).

"Mr. Jacobs has an obvious affinity for the prayer book, and doesn't seem to care much for recent attempts to 'modernize' worship. But his account is bereft of sentimental regret, and he is aware of the difficulties intrinsic to restricting religious expression to a set of prescribed texts. If only every archbishop had been so wise."—Barton Swaim, Wall Street Journal

"[Readers] watch as the majesty of Cranmer's prose wins over generations of worshippers, spiritually nourished by its regal cadences and fiercely resistant to those who would revise it. Indeed, the repeated attempts to revise the Book—some successful—occasion tense drama, succinctly recounted here. Likewise chronicled are the international conflicts occasioned as the Book metamorphoses as the global empire Britain builds—then shrinks. This fascinating history, a strong entry in the Lives of Great Religious Books series, exposes the surprisingly taut life of a church-pew volume."—Bryce Christensen, Booklist

"Alan Jacobs offers a handy introduction to the cultural and social effects that the presence and promotion of this book provided for centuries of English-speaking worshipers."—John L. Murphy, New York Journal of Books

"[A] gem. With his usual elegance and wit, Jacobs describes Cranmer's political and religious aims, follows debates over the BCP between traditionalists who thought it too Protestant and Puritans who thought it too Catholic, and along the way explains the literary and liturgical qualities of the prayer book."—Peter J. Leithart, First Things

"A fascinating, fast-paced account of the 464 years of 'life' that the Book of Common Prayer has both enjoyed and suffered. . . . General readers will enjoy the peregrinations of the Book of Common Prayer itself and will profit from Jacobs's cultural and religious insights and commentary. Anglophiles and students of ritual, literature, and religion will also gain appreciation of the paradoxical nature of human language and actions."—Carolyn Craft, Library Journal

"Manage[s] to condense a vast amount of material into [a] handy-sized compendium."—Gareth J. Medway, Magonia Blog

"It turns out that the story of the Anglican prayer book is a great yarn: a tale of theological dispute and refined prose style against a backdrop of the mafia-like power struggles of England's royal families. Jacobs is a tactful historian, who doesn't assume that his readers know much about English history or religious doctrine. But I imagine that even a reader who knew a great deal would enjoy the snap of Jacobs's telling, as when he describes an early disavowal of transubstantiation as 'palpably crabby.' If you've ever wondered why the Church of England has failed to substantially revise its prayer book since 1662, or what the jokes in Victorian novels about church candlesticks are really about, this is the history for you."—Caleb Crain, Millions

"In the English-speaking world, [The Book of Common Prayer] has had this unique kind of universal appeal for some time now. But it got there by a circuitous route, and Alan Jacobs gives us a very deft accounting of that wending trail. . . . He writes about a book that has established many of the cadences of the modern English language for us, and he does so as someone who understands and loves those cadences. This is a good book, about a worthy subject, and is well written."—Douglas Wilson, Books & Culture

"Jacobs' treatment of the afterlife of one of the most important works in the English language—perhaps the only afterlife there is—is elegant and authoritative."—Willy Maley, Times Higher Education

"Reading the history of the The Book of Common Prayer is to come face to face again with the great work of the Protestant Reformers, but it also shows the work (great or otherwise, depending on the current reader's traditional leanings) of later Reformers who revised the book. Alan Jacobs does a great job in showing the times and personages that have influenced subsequent revisions of the book or who have battled the book's influence."—Carole McDonnell, Compulsive Reader

"Within a mere 200 pages, one could not wish for a more engaging introduction to the history of the Prayer Book. It is beautifully written and produced, and would make a perfect gift. . . . This is a triumph of compression and lucidity."—David Martin, Church Times

"The Book of Common Prayer has undergone numerous revisions and adaptations since it was first published in 1549. Jacobs traces the life of this influential book from English Reformation to the modern era. . . . Jacobs skillfully describes the challenges associated with the Reformation, Puritanism, the Restoration, and the Victorian era, when rubrics and the role of government were important issues. . . . Readers will appreciate the author's analysis and insights."—Choice

"This book is a worthwhile introduction for anyone interested in how Anglican services have taken their present form. It demonstrates that unity in diversity across the provinces of the Anglican Communion stems, in no small way, from the book of 1662 built on Cranmer's earlier work. While references to Ireland are sparse, the joy of this biography is that it explains our Anglican heritage of worship in very accessible language."—Robert Marshall, Church Review

"Professor Jacobs has followed carefully all that happened regarding the book and its changes. He is sensitive to the opinions of those on both sides of each controversy and his book is both informative and interesting. Be sure to read the final Notes section, lots of good info there, too."—Lois Sibley, Reviewing Religious Books

"[Jacobs] has certainly given contemporary Anglicans and early modern historians a quick overview of a compelling 'biography' of one of the most significant books of classical and contemporary English literature."—Timothy Maschke, Sixteenth Century Journal

"Alan Jacobs has produced a highly commendable read for those interested in the origins and evolving history of the Book of Common Prayer."—Jonathan Rose, Reader

"A powerful overview of the Anglo-Catholic approach to Anglican liturgy and the history of its prayer books."—Ashley Null, The Gospel Coalition

"A superb resource."—Sylvia A. Sweeney, Anglican and Episcopal History

"A beautifully lucid introduction to the origins and use of one of the most significant religious texts in the English-speaking world. Alan Jacobs helps us to understand not only the book but also the Christian sensibility of the whole Anglican tradition and the culture it nourished."—Dr. Rowan Williams, Magdalene College, University of Cambridge

"The Book of Common Prayer, often thought of as a source of Anglican stability, has led an interesting life of many changes. Jacobs tracks them all like a shrewd detective."—Garry Wills, author of What the Gospels Meant

"From pious aspiration to ruthless politics, and from bonfires of hated communion rails to the Star Wars prayer, the history of the Book of Common Prayer, in Alan Jacobs' hands, is both an education and a bright panorama. I can hardly remember another read so swift yet at the same time so helpful."—Sarah Ruden, author of Paul Among the People: The Apostle Reinterpreted and Reimagined in His Own Time

"Few texts have had as much influence on the language, culture, and religious life of English-speaking nations as the Book of Common Prayer. Alan Jacobs masterfully distills its history with a poetic touch that is at once scholarly, reverential, and highly engaging. There is no better introduction or guide to the Book of Common Prayer than this one."—Carlos Eire, author of A Very Brief History of Eternity

"Alan Jacobs traces the life of the Book of Common Prayer as it has grown and changed over its four-hundred-year history, responding to social and historical conditions and to its own inner convictions and complexities. Many books have been written about the Book of Common Prayer, but this one is uniquely compact, illuminating, and moving."—Edward Mendelson, Columbia University

"This book is a pleasure to read. Alan Jacobs's writing is informed, lucid, accessible, and witty. I know of no other work that is comparable."—R.W.L. Moberly, Durham University