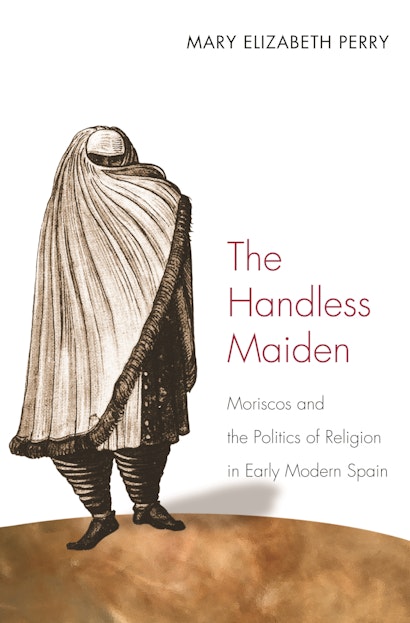 In 1502, a decade of increasing tension between Muslims and Christians in Spain culminated in a royal decree that Muslims in Castile wanting to remain had to convert to Christianity. Mary Elizabeth Perry uses this event as the starting point for a remarkable exploration of how Moriscos, converted Muslims and their descendants, responded to their increasing disempowerment in sixteenth- and early-seventeenth-century Spain. Stepping beyond traditional histories that have emphasized armed conflict from the view of victors, The Handless Maiden focuses on Morisco women. Perry argues that these women’s lives offer vital new insights on the experiences of Moriscos in general, and on how the politics of religion both empowers and oppresses.


Drawing on archival documents, legends, and literature, Perry shows that the Moriscas carried out active resistance to cultural oppression through everyday rituals and acts. For example, they taught their children Arabic language and Islamic prayers, dietary practices, and the observation of Islamic holy days. Thus the home, not the battlefield, became the major forum for Morisco-Christian interaction. Moriscas’ experiences further reveal how the Morisco presence provided a vital counter-identity for a centralizing state in early modern Spain. For readers of the twenty-first century, The Handless Maiden raises urgent questions of how we choose to use difference and historical memory.

Mary Elizabeth Perry is the author of two prize winning books, Gender and Disorder in Early Modern Seville (Princeton) and Crime and Society in Early Modern Seville. She is Research Associate at the Center for Medieval and Renaissance Studies at the University of California, Los Angeles, and Adjunct Professor of History at Occidental College.

"Spain's experiment in compulsory spirituality is analyzed by Perry with grace, precision, and cultural sensitivity. Her study stands out above all for its clear and concise exposition of the political pressures that the Morisco population faced with regard to the perpetuation of its medieval Andalusian heritage. . . . [The Handless Maiden] reveals a rich world of private experiences that has until now escaped the attention of traditional political historians."—Maureen Flynn, American Historical Review

"The Handless Maiden is a fascinating and well-written book that offers a new perspective on the Moriscos of Spain and their struggle to find a place in a society that, at least among the upper echelons, was not in favor of what we would nowadays call multiculturalism."—Trevor J. Dadson, Islam and Christian-Muslim Relations

"Clearly written and offering heretofore unexamined evidence, [The Handless Maiden] should elicit interest in a fascinating people and culture, too little known outside of Hispanism."—Barbara Weissberger, Medieval Encounters

"The Handless Maiden turns the tables on the traditional history of the encounter between Christians and Moslems in southern Spain."—Helen Rawlings, English Historical Review

"Mary Elizabeth Perry's work has considerably enriched our understanding of how gender possibly can inform our evaluation of Morisco identities."—Debra Blumenthal, Renaissance Quarterly

"A book of compelling interest. . . . [T]his book is an insightful and worthwhile exploration of the intersection of religion and politics in early modern Spain."—Mary Coleman, Reviews in Religion and Theology

"This is a rare, sympathetic look into the lives of the Moriscos—those Muslims and their descendants who remained in Spain after the completion of the Spanish Christian reconquest in 1492 and who were then forcibly baptized. . . . Perry is the first author to devote a book to Morisco women, and she succeeds by letting them speak for themselves."—Robert W. Lebling, Saudi Aramco World

"This wonderful book presents a novel and insightful reading of an important part of Morisco history, and does so in a clear and engaging way. Focusing on a series of watershed events for Morisco life in southwestern Spain, the author addresses topics of great importance to historians of early modern Spain and Europe while also offering valuable insights to readers more interested in the modern era. Her intersecting of the Moriscas' history into the wider history of Muslim life and Spanish society is remarkable."—Teofilo F. Ruiz, University of California, Los Angeles, author of From Heaven to Earth: The Reordering of Castilian Society, 1150-1350

"In her often compelling, moving, and richly detailed exploration of the experience of Morisco women (Moriscas), Mary Elizabeth Perry recovers their voices and lives, which were in many ways silenced and obscured by an oppressive state and the Moriscos' own patriarchal society. In showing why the Moriscas were paradigmatic for all Morisco experience, she offers new perspectives on Morisco accommodation and resistance."—Mark D. Meyerson, University of Toronto, author of A Jewish Renaissance in Fifteenth-Century Spain and The Muslims of Valencia in the Age of Fernando and Isabel