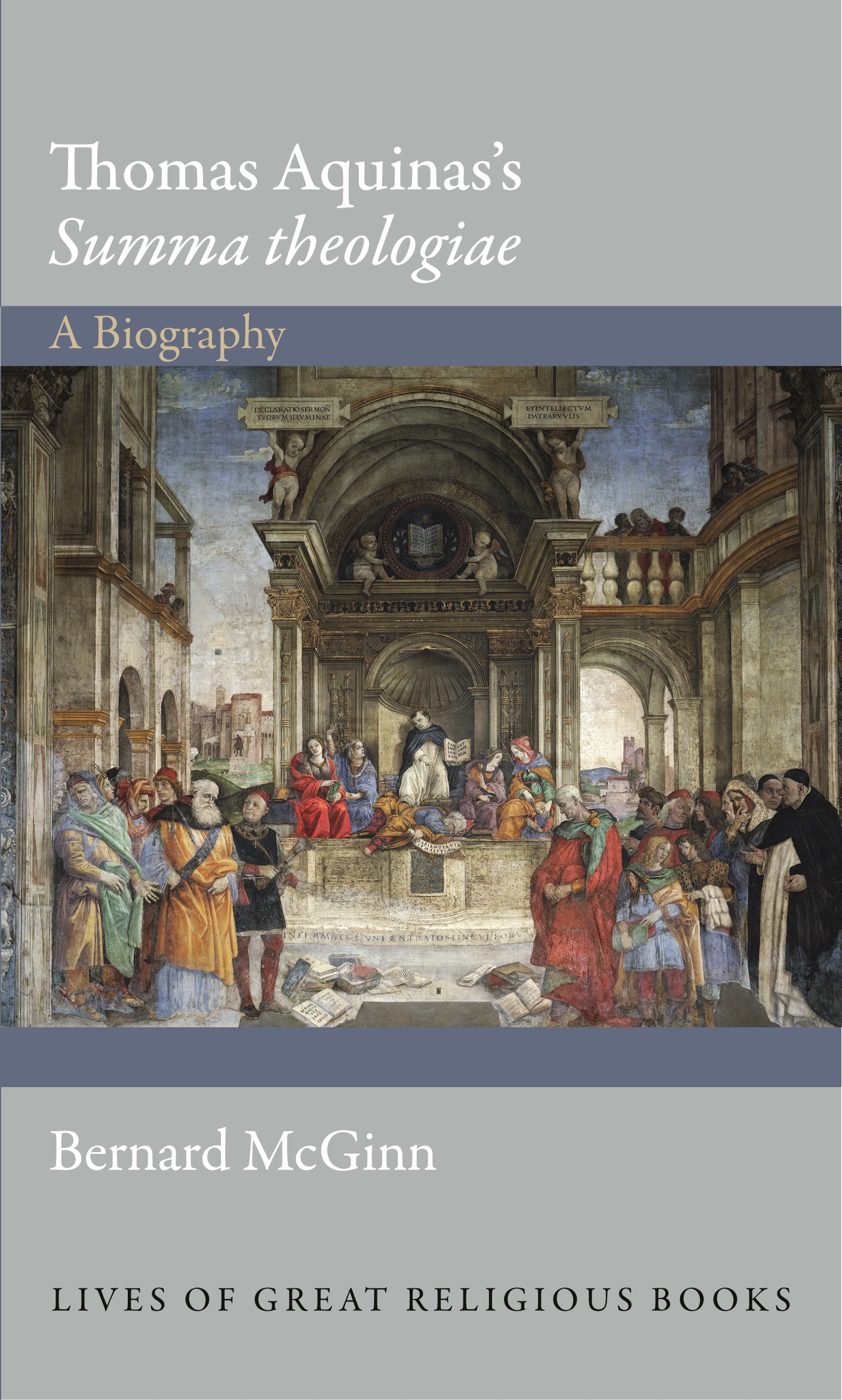 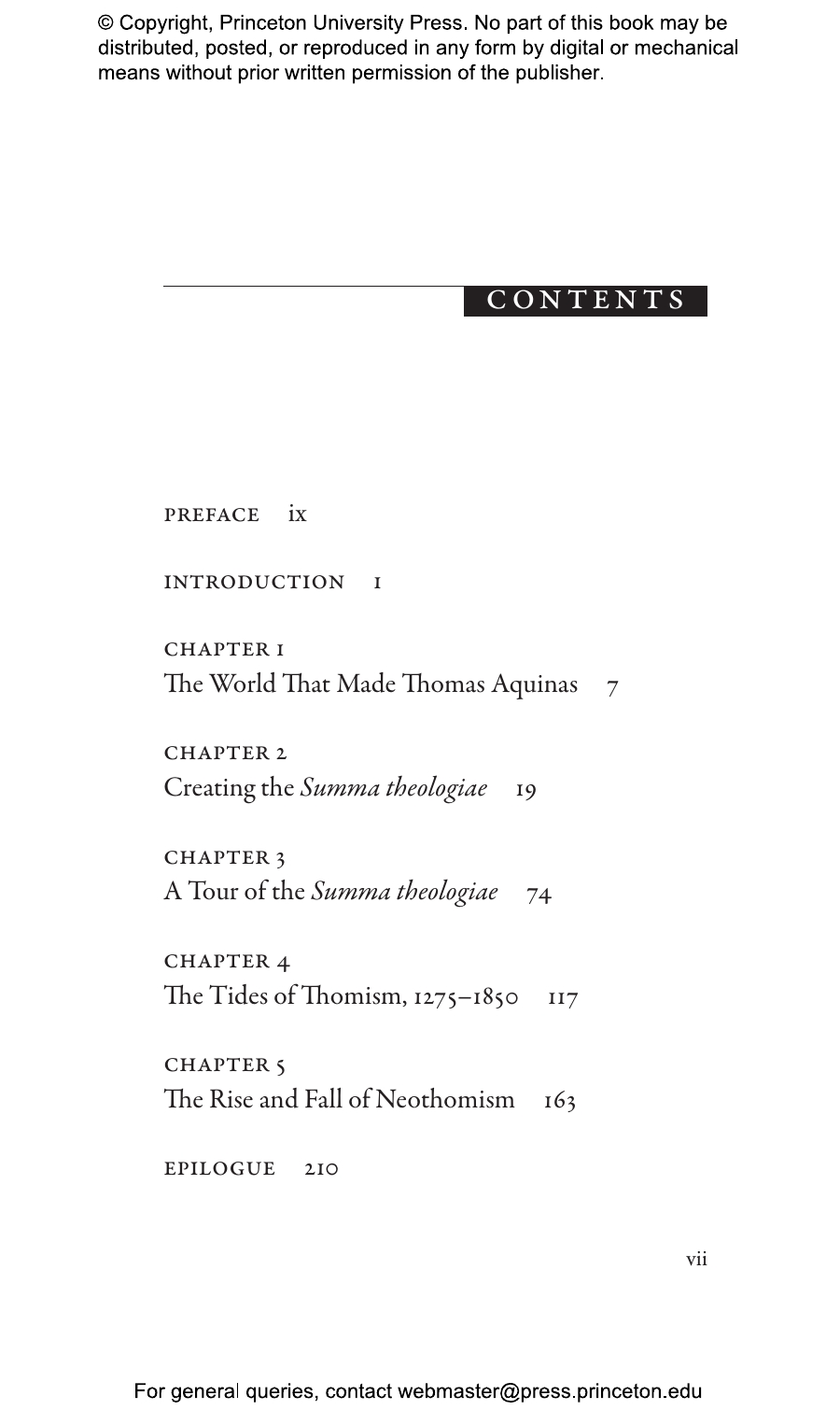 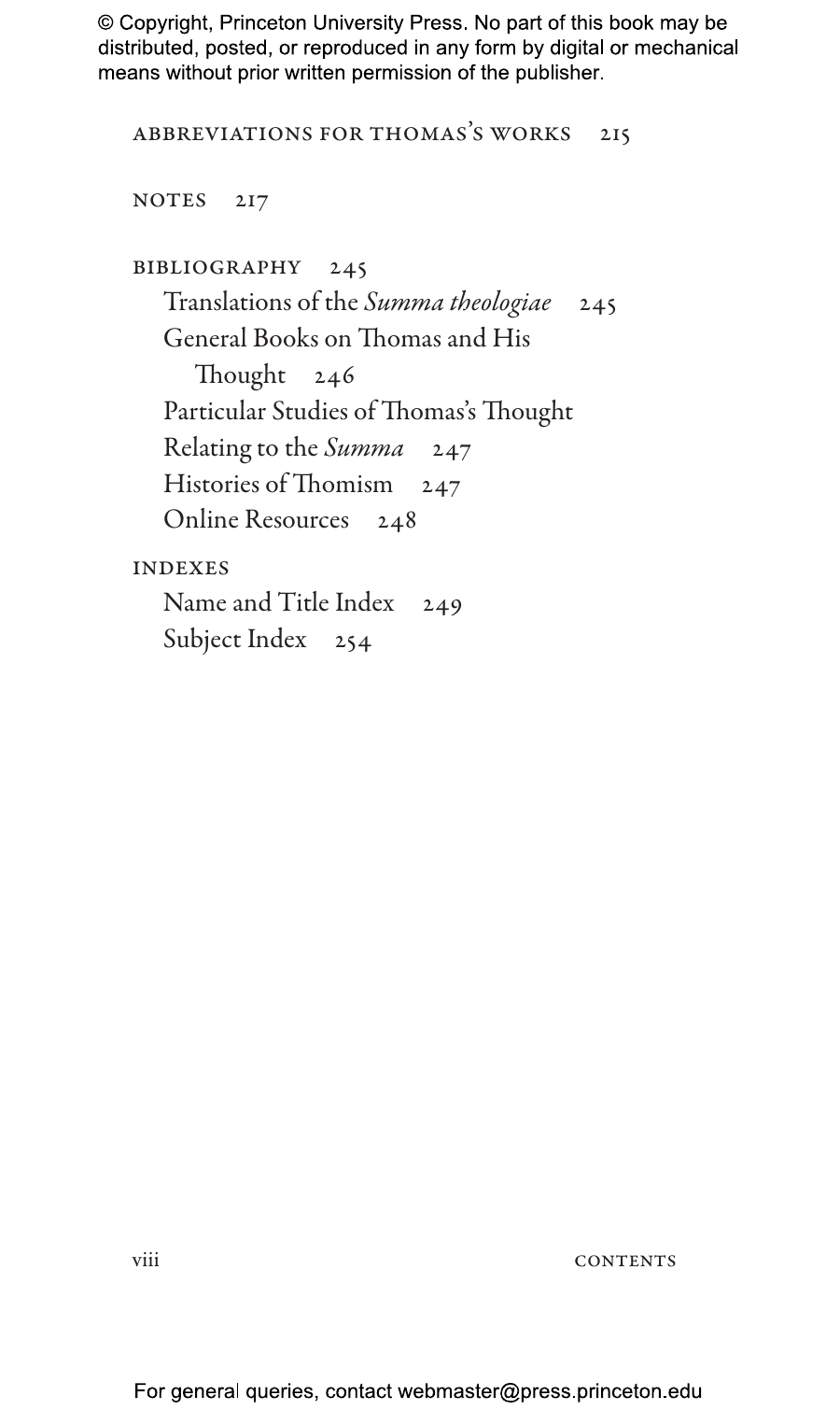 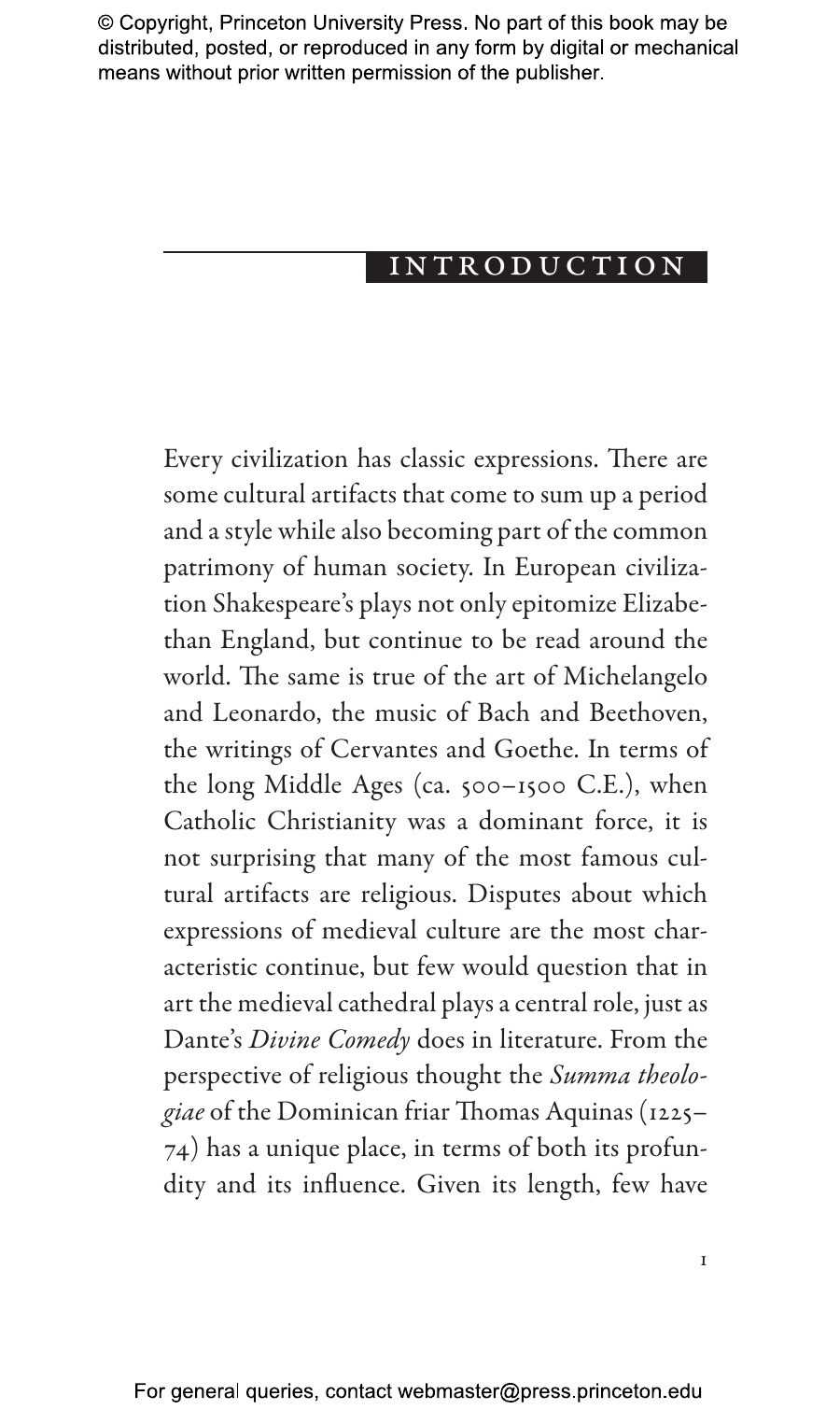 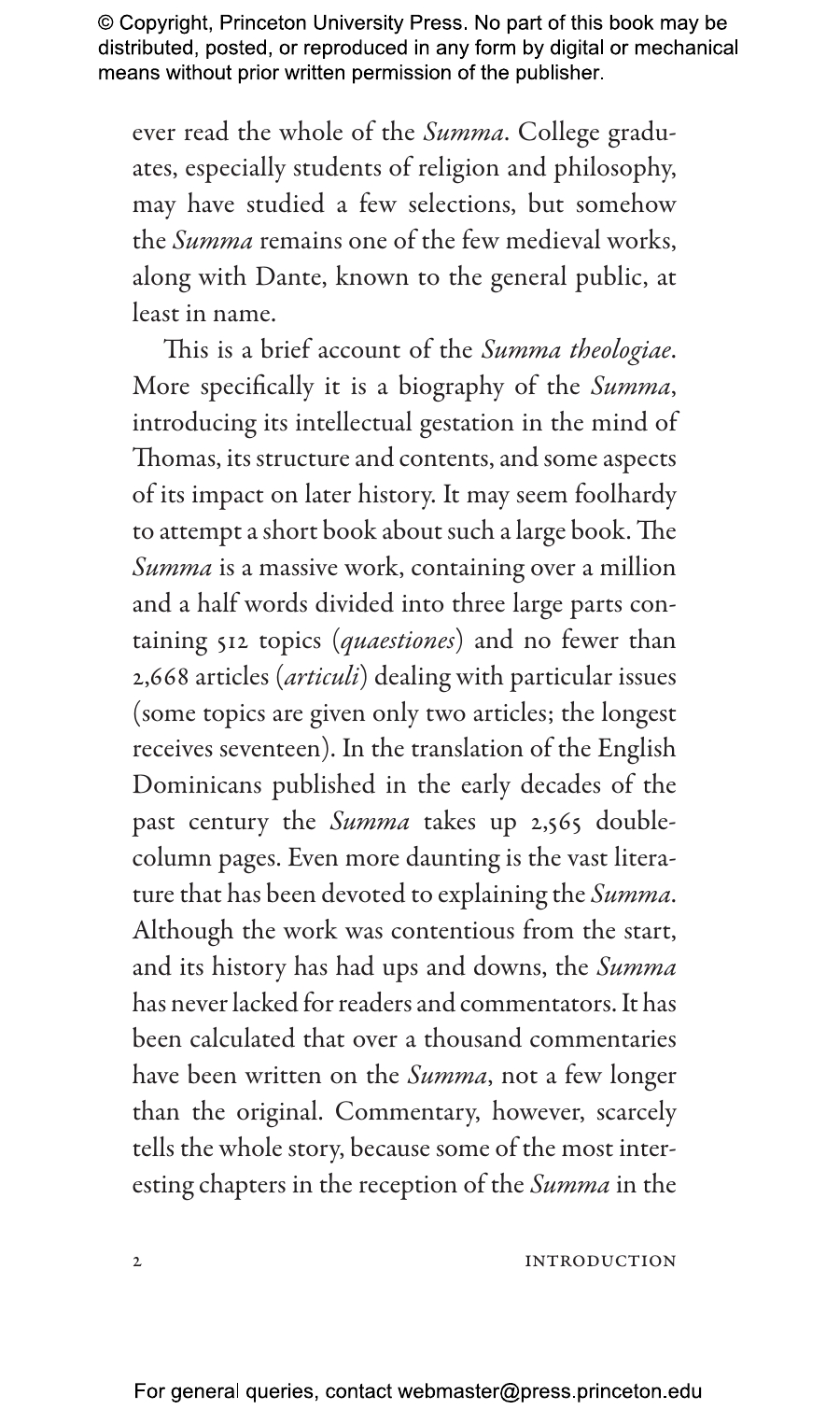 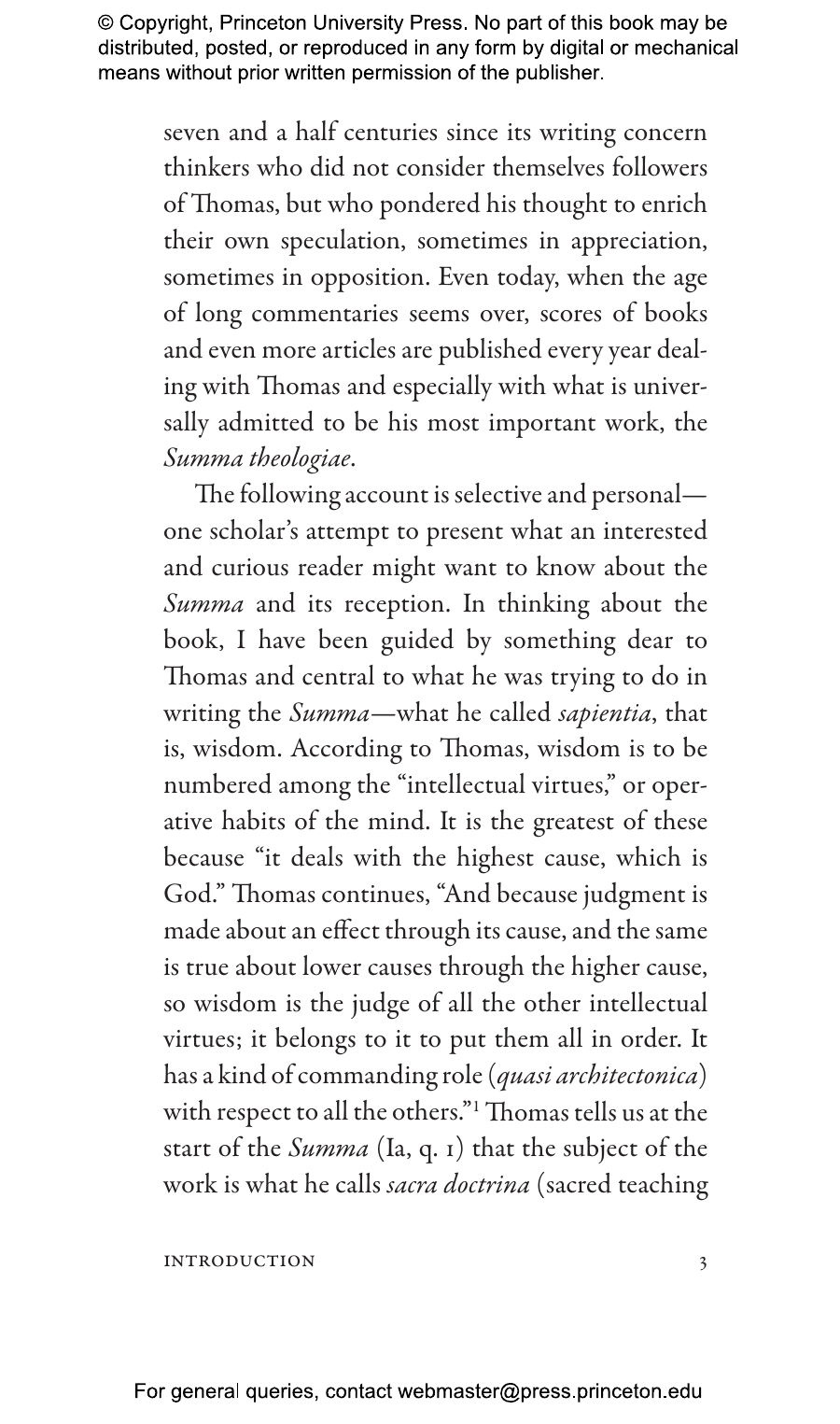 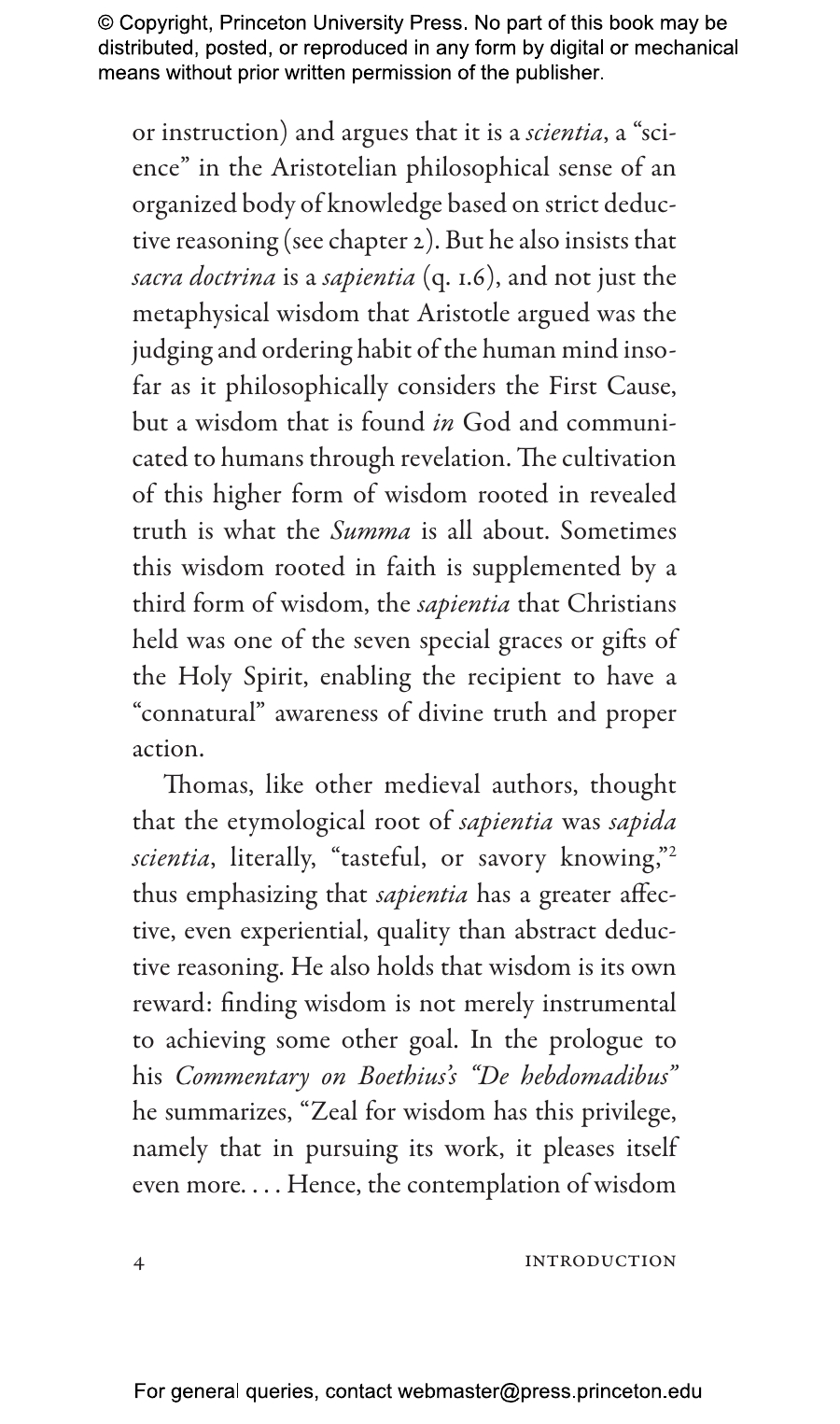 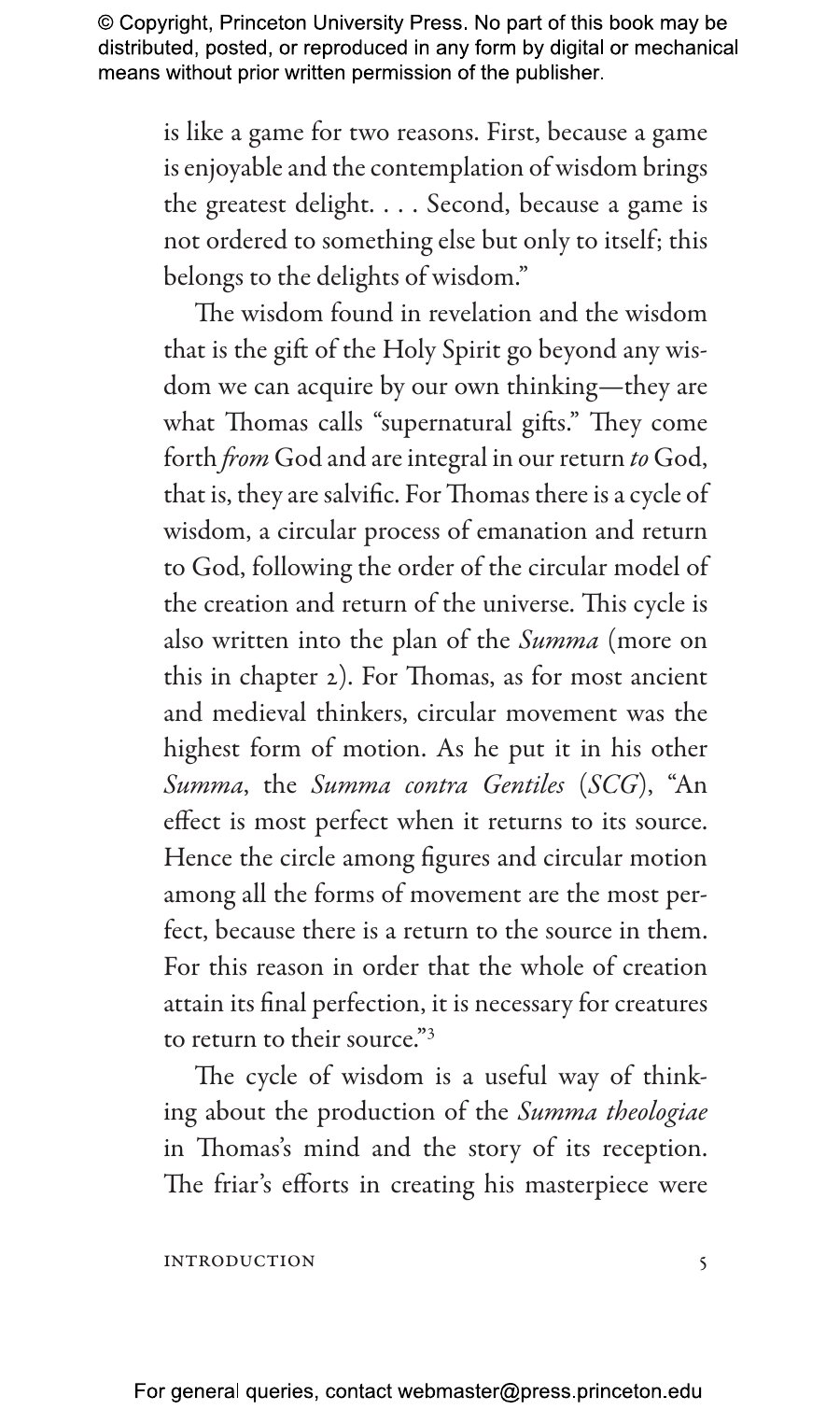 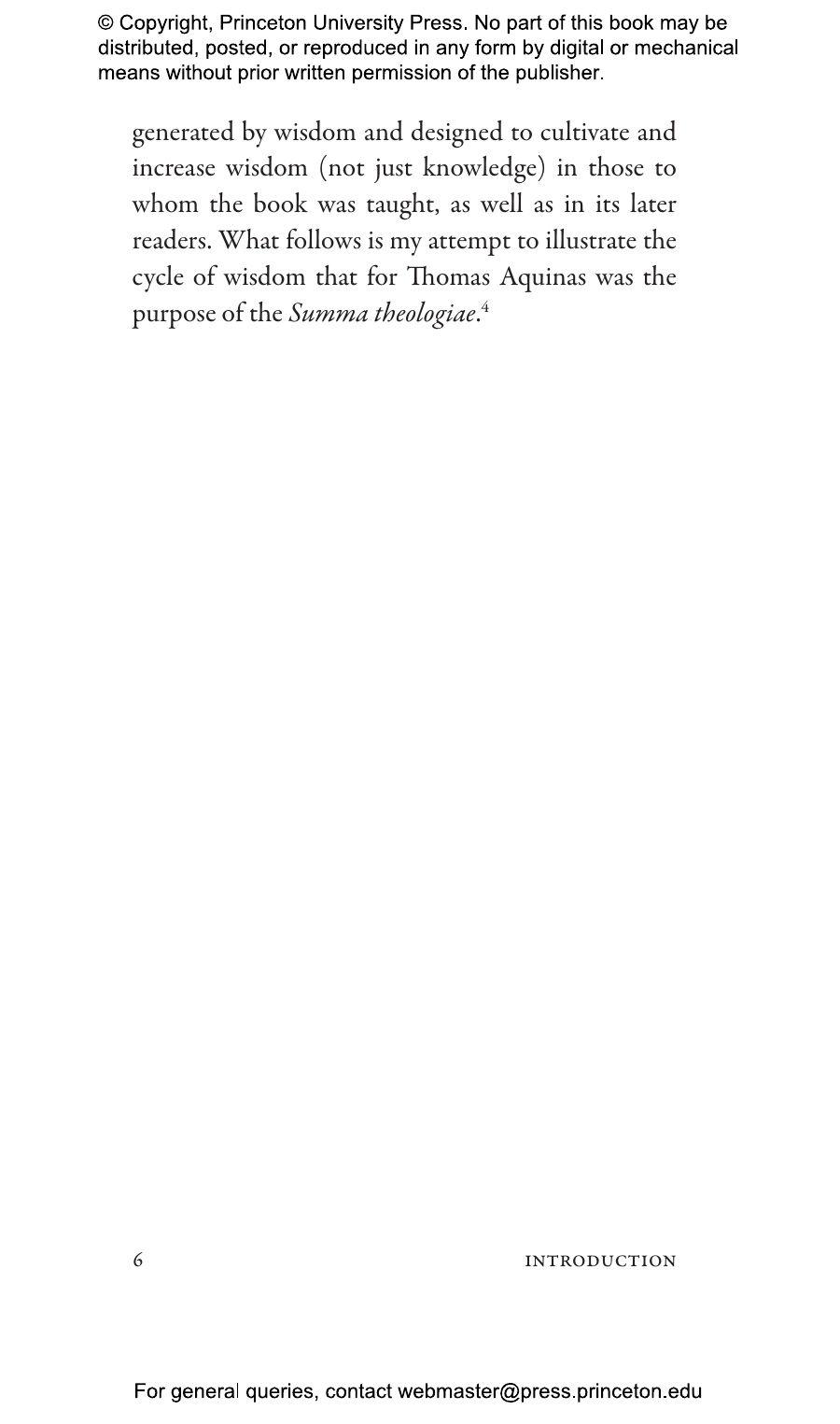 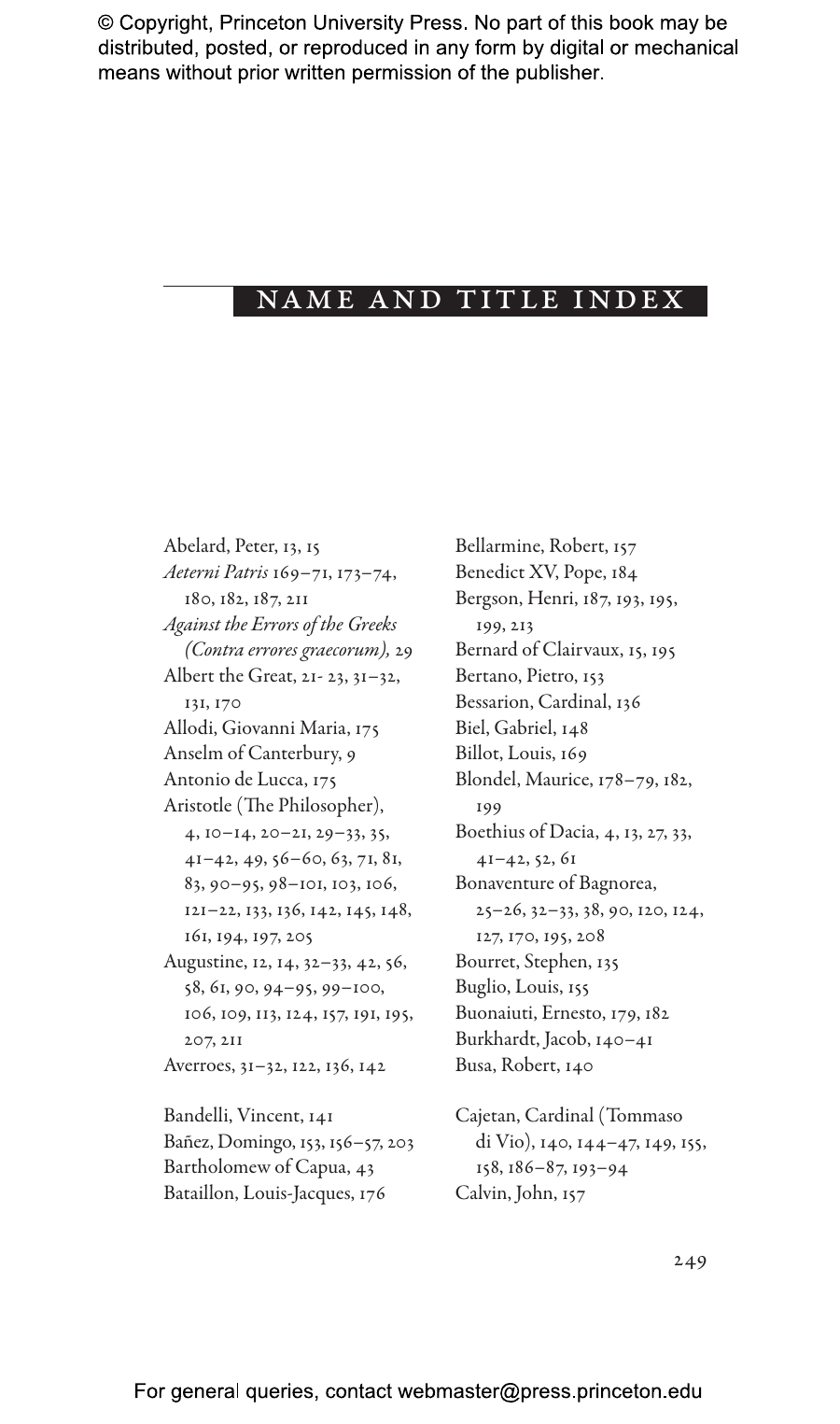 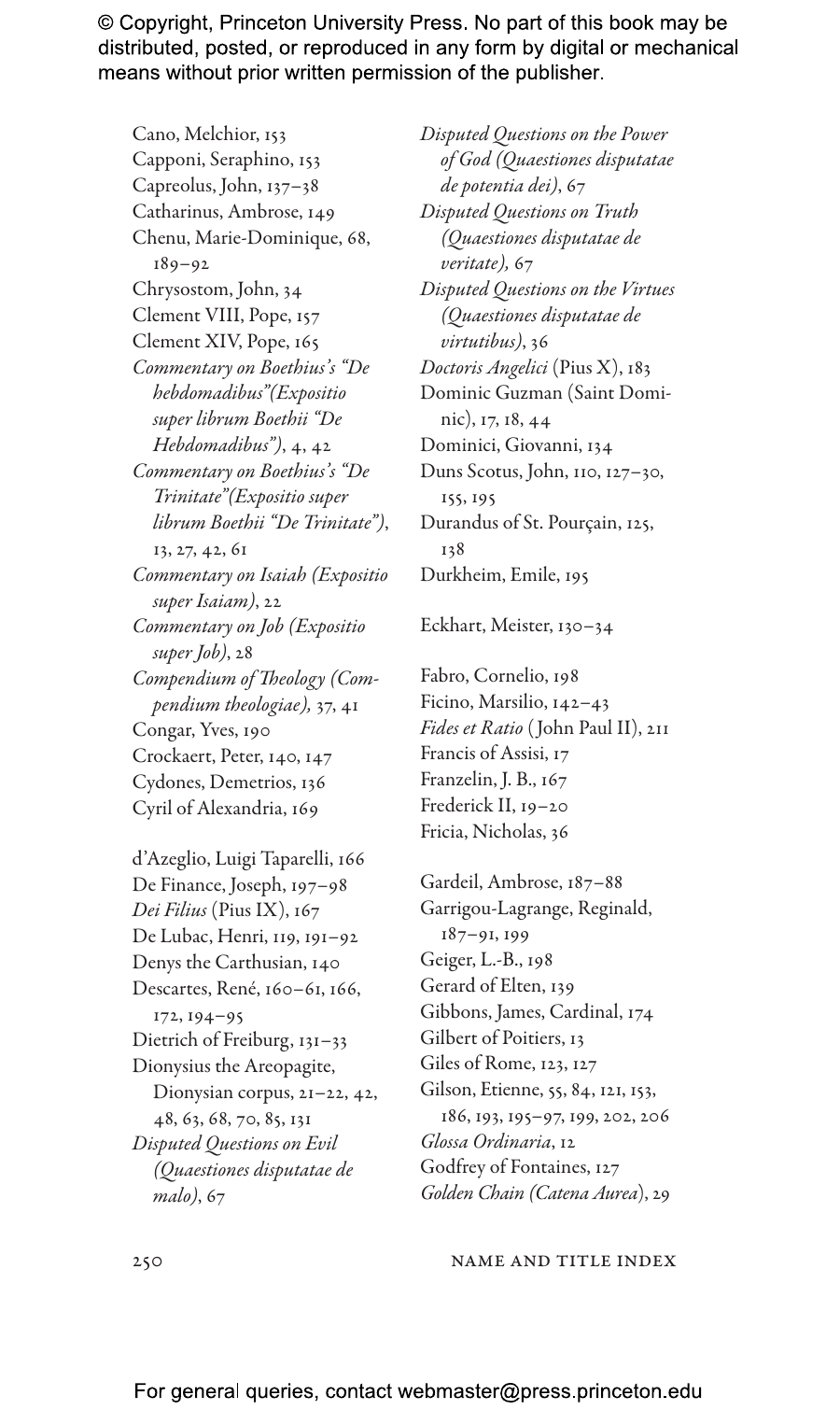 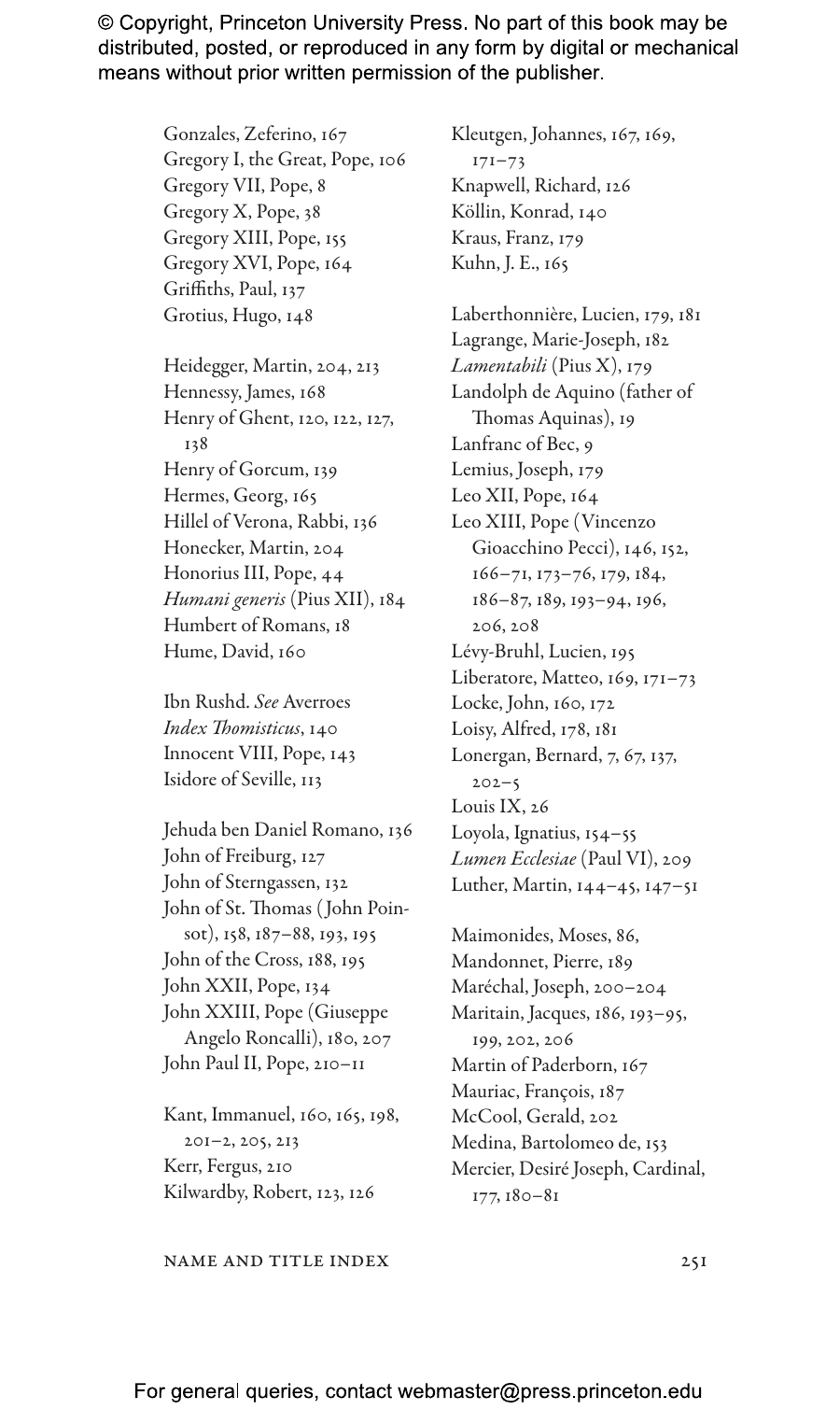 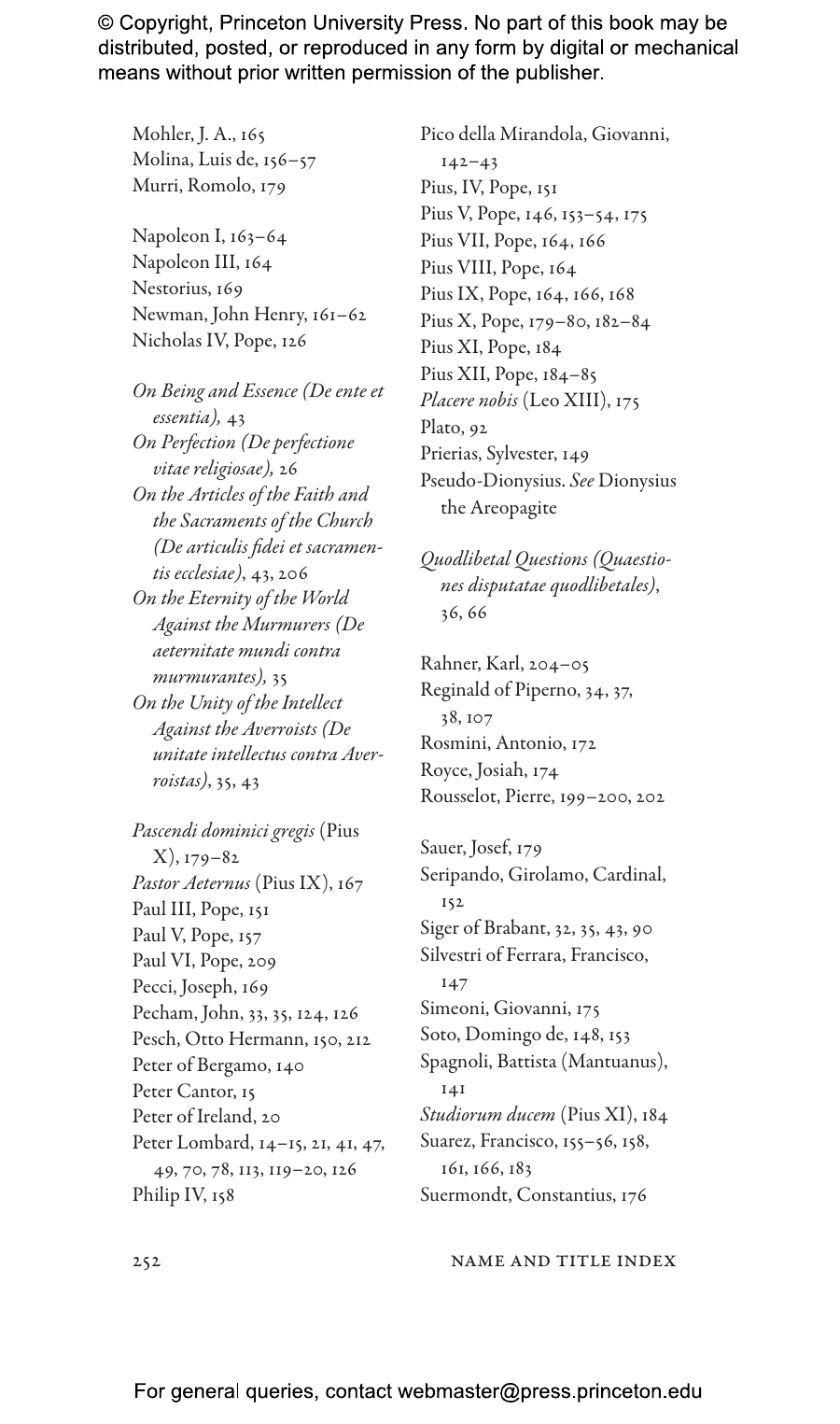 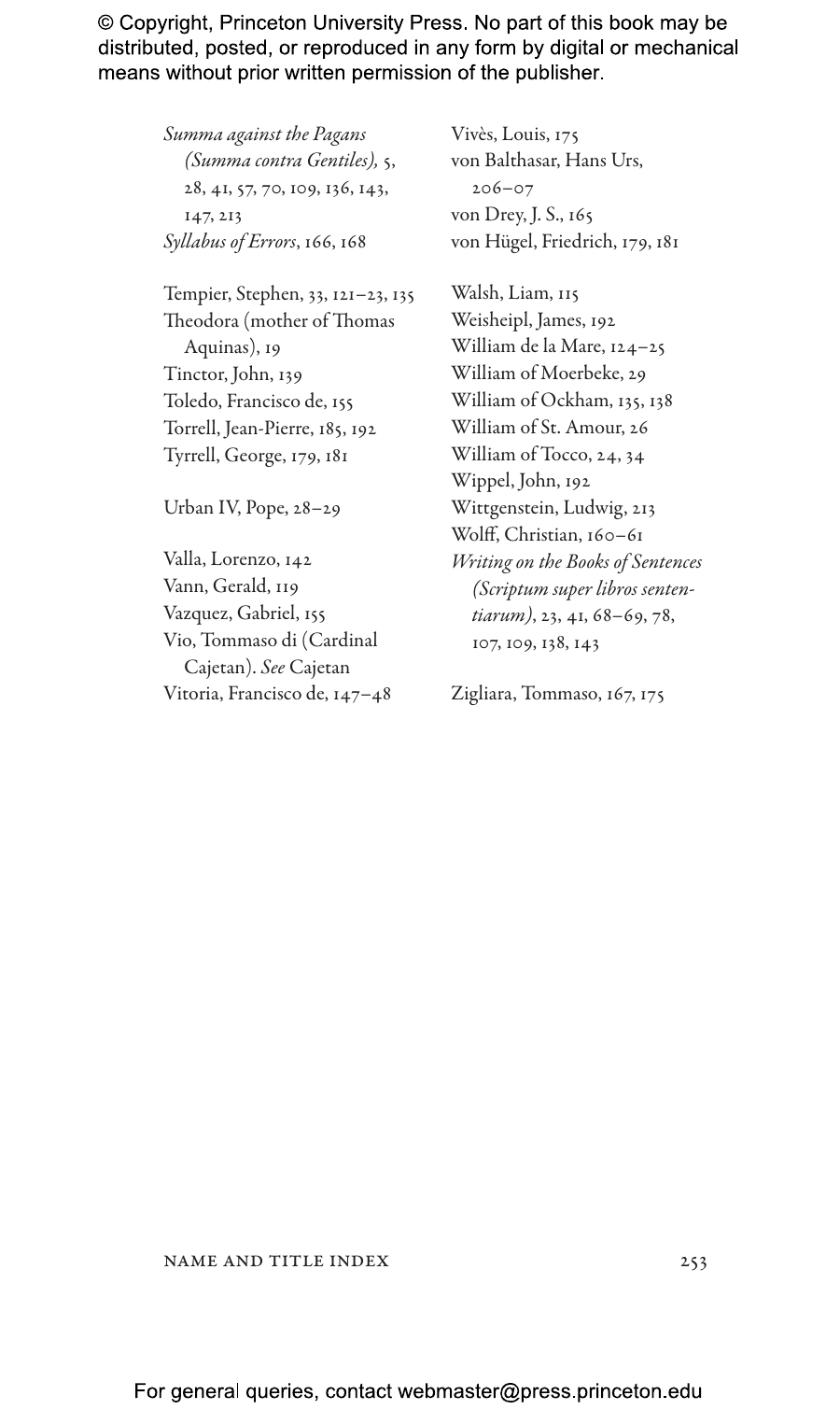 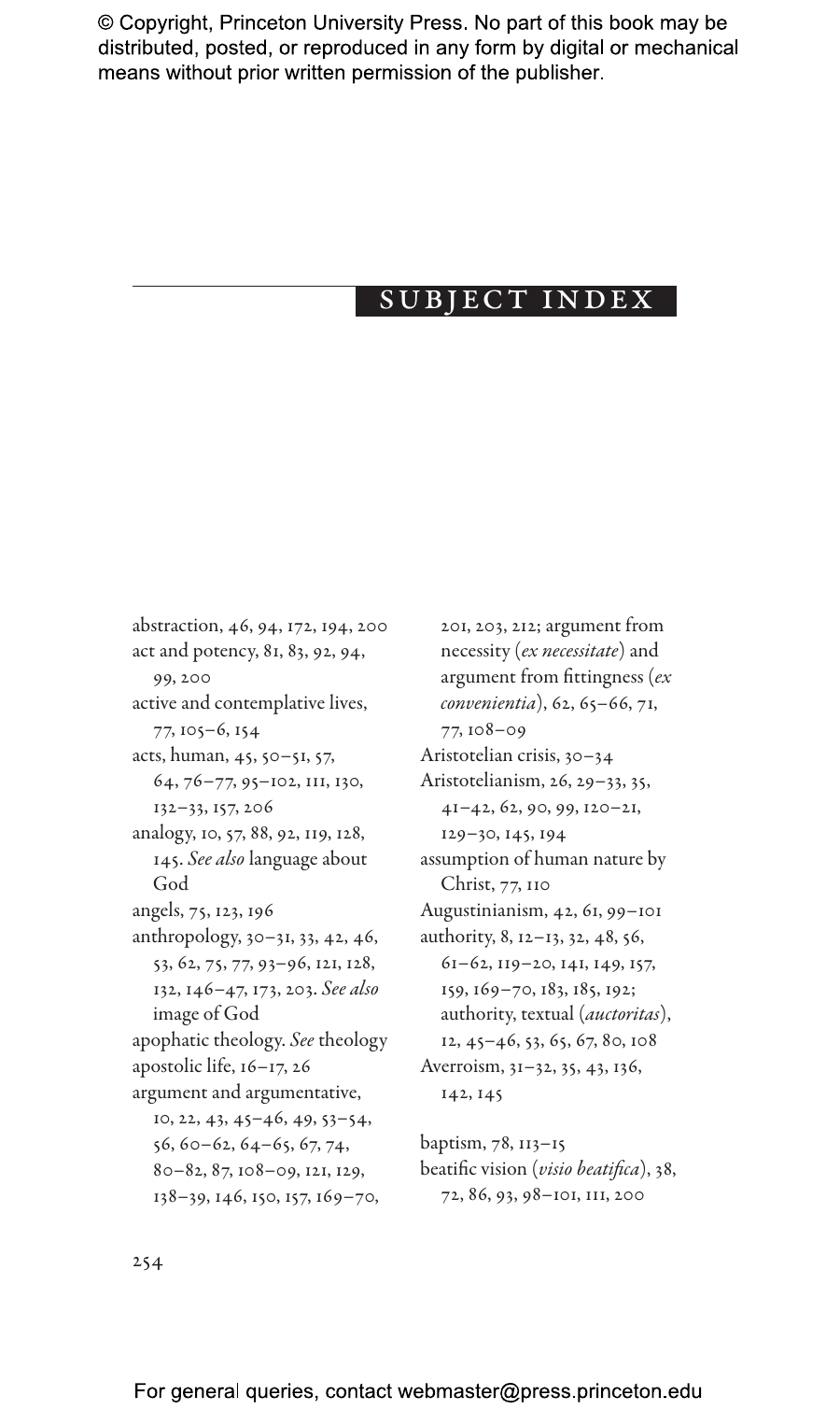 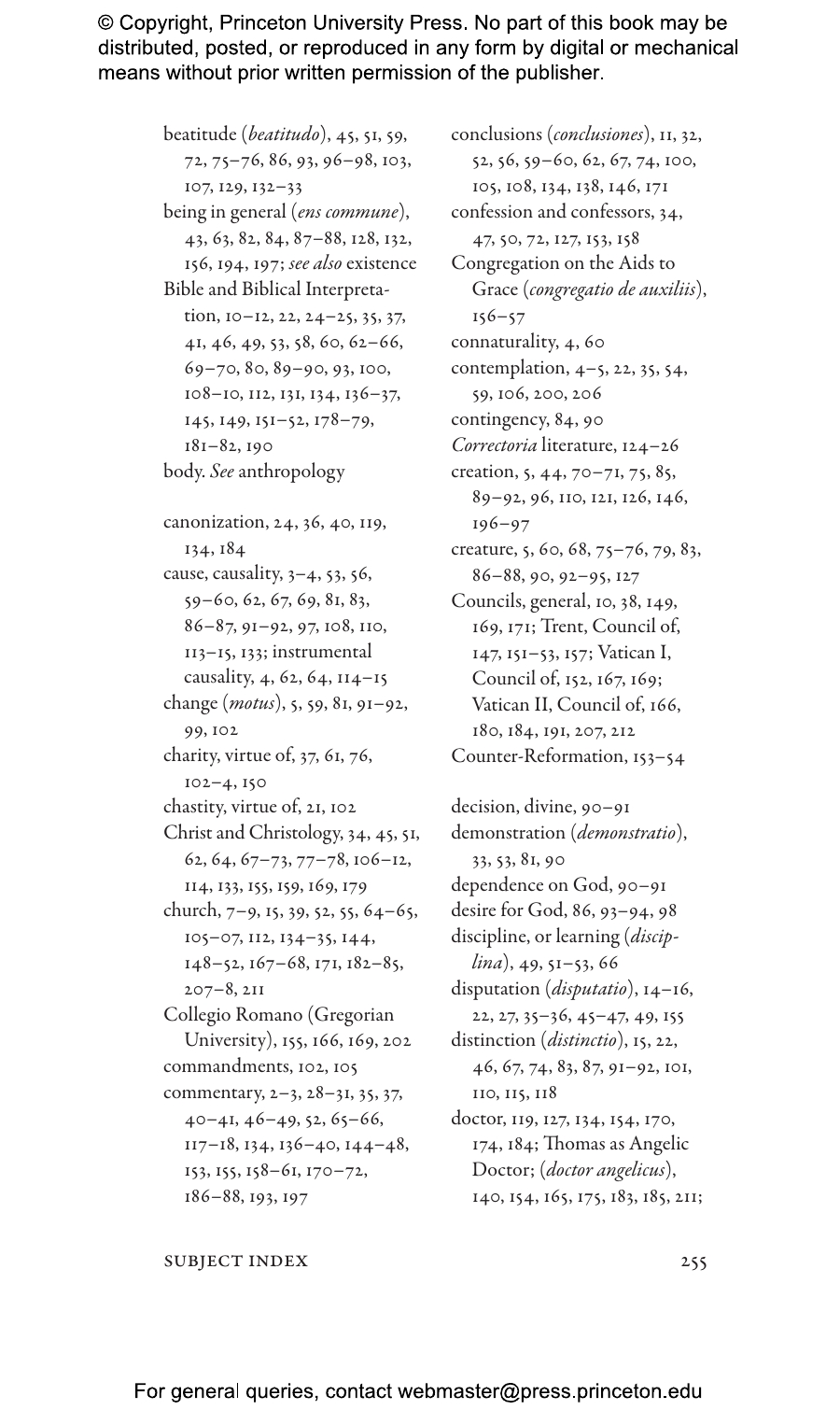 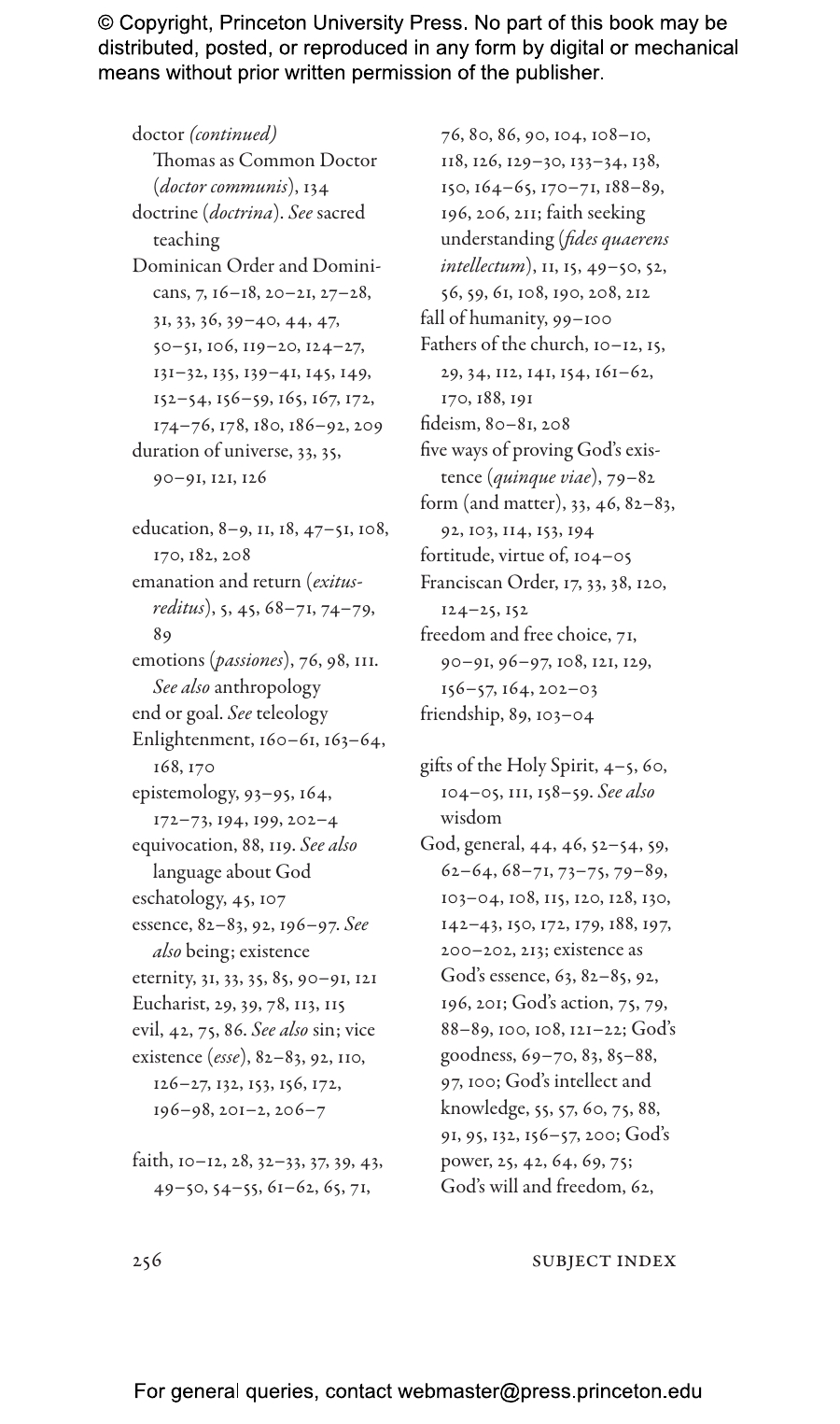 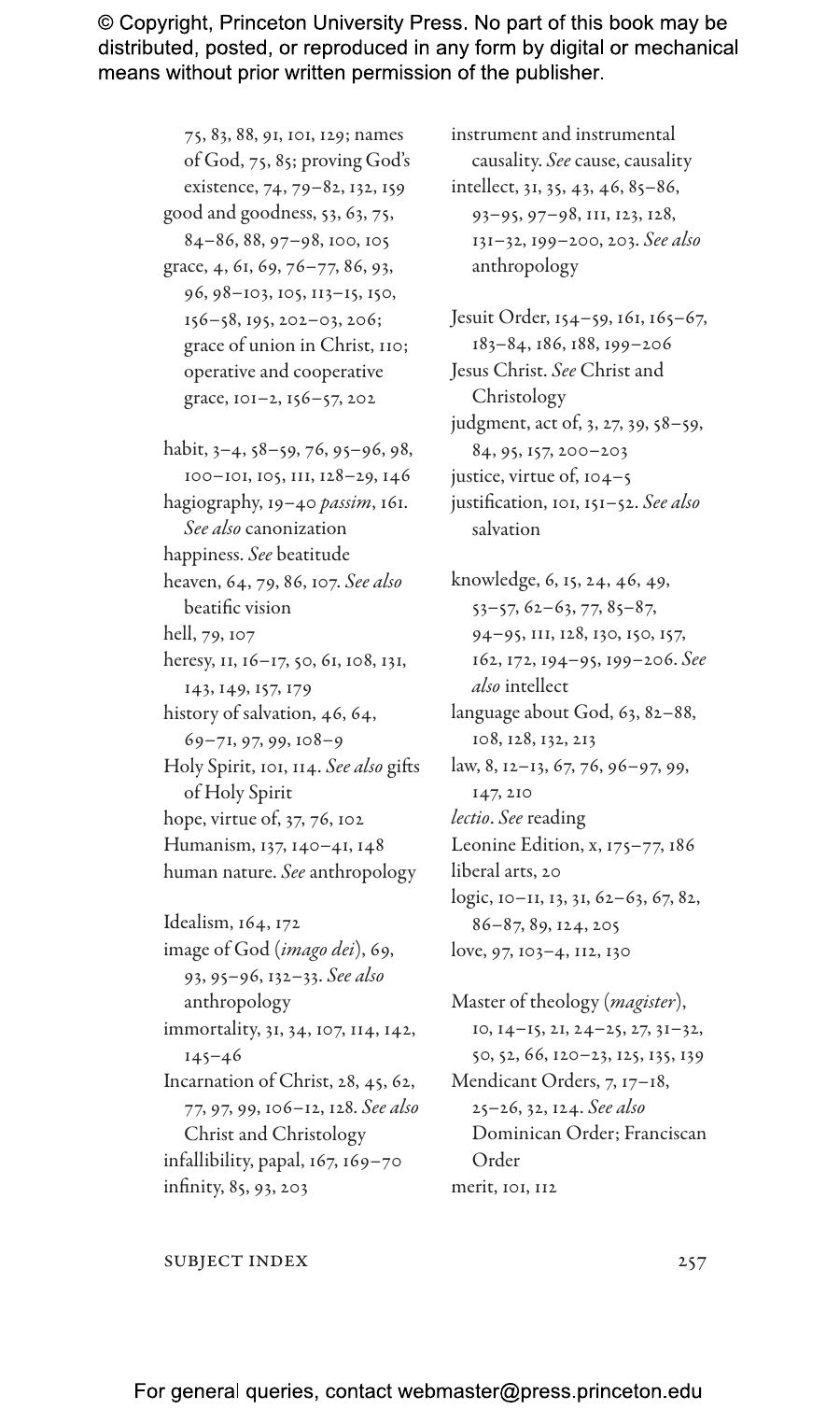 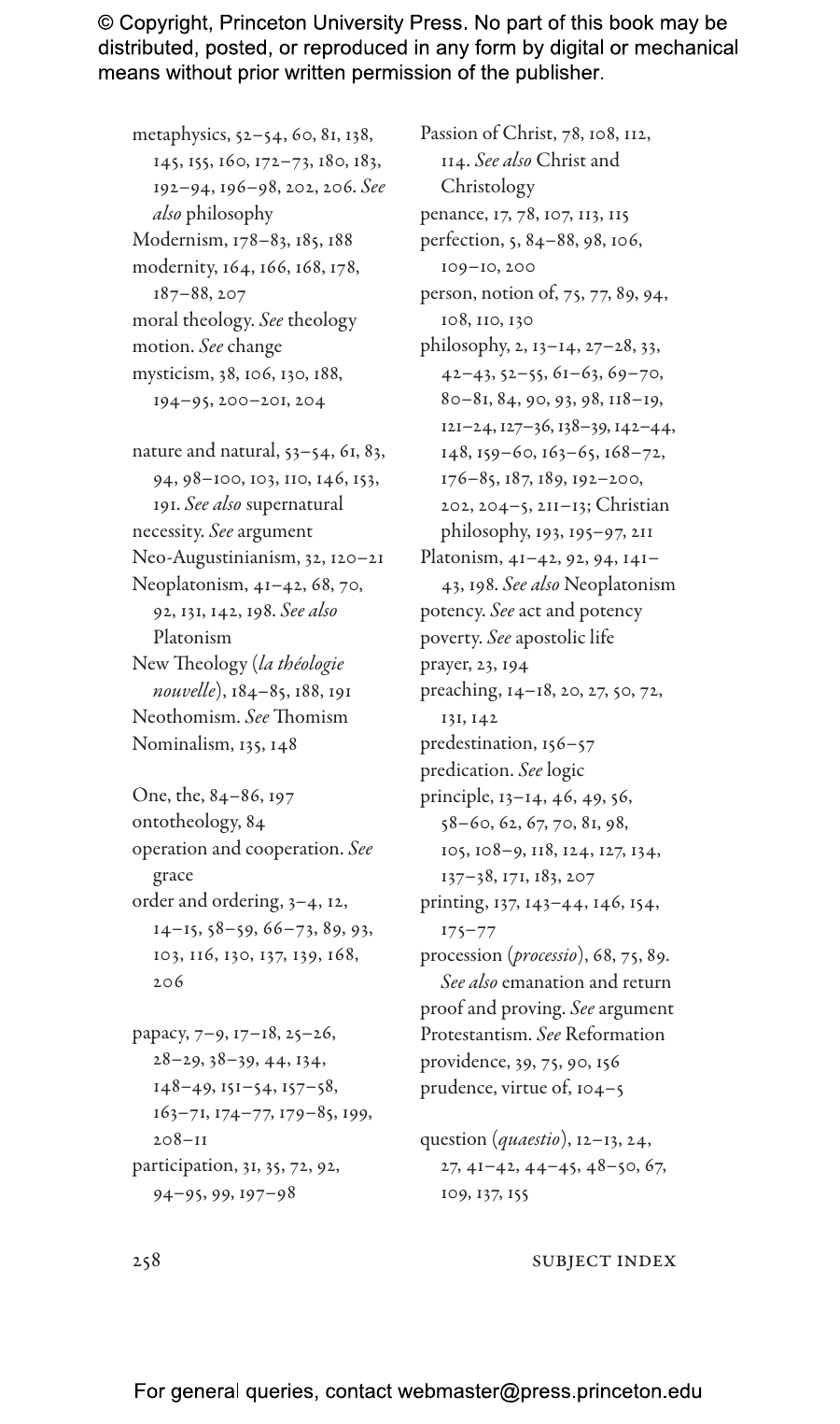 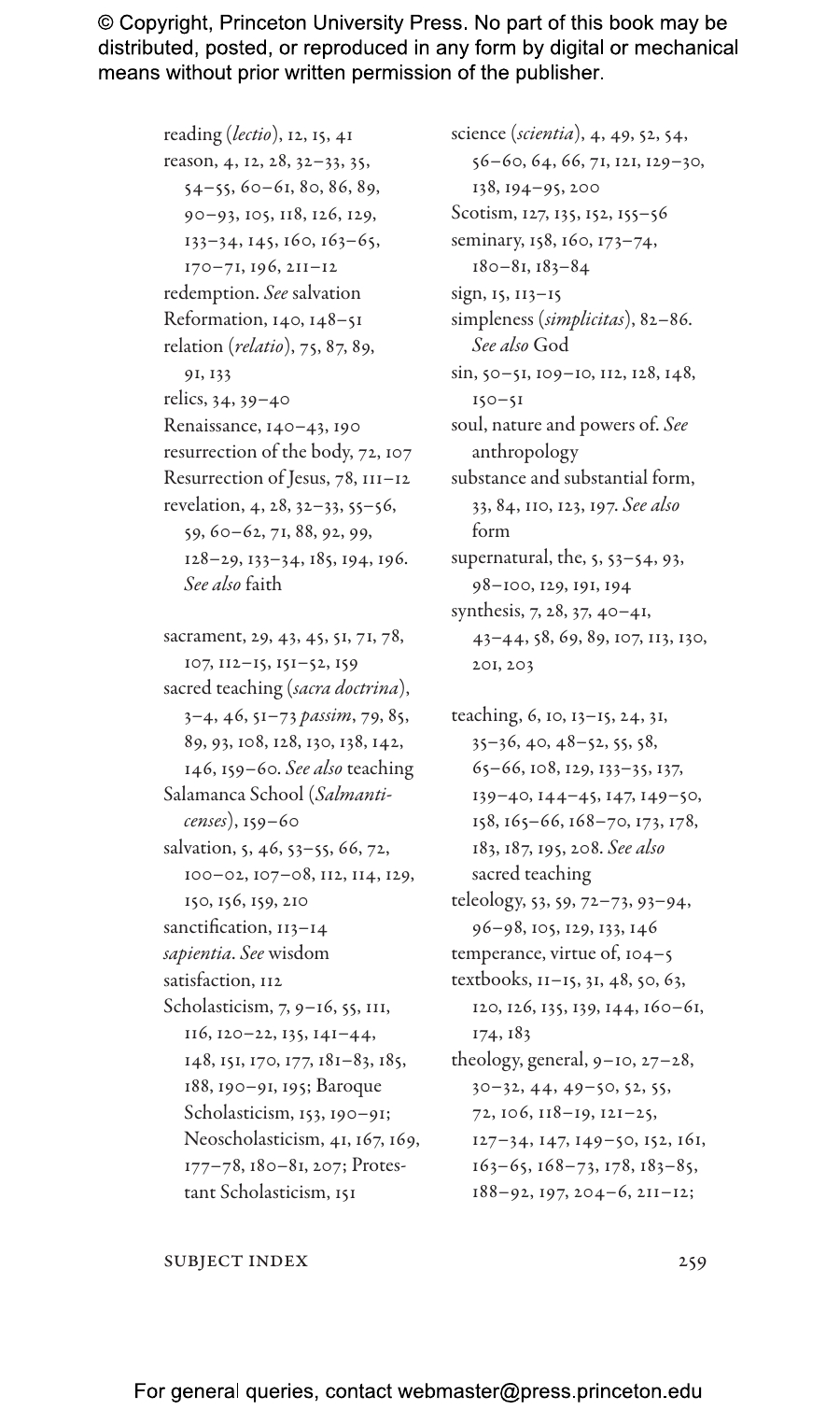 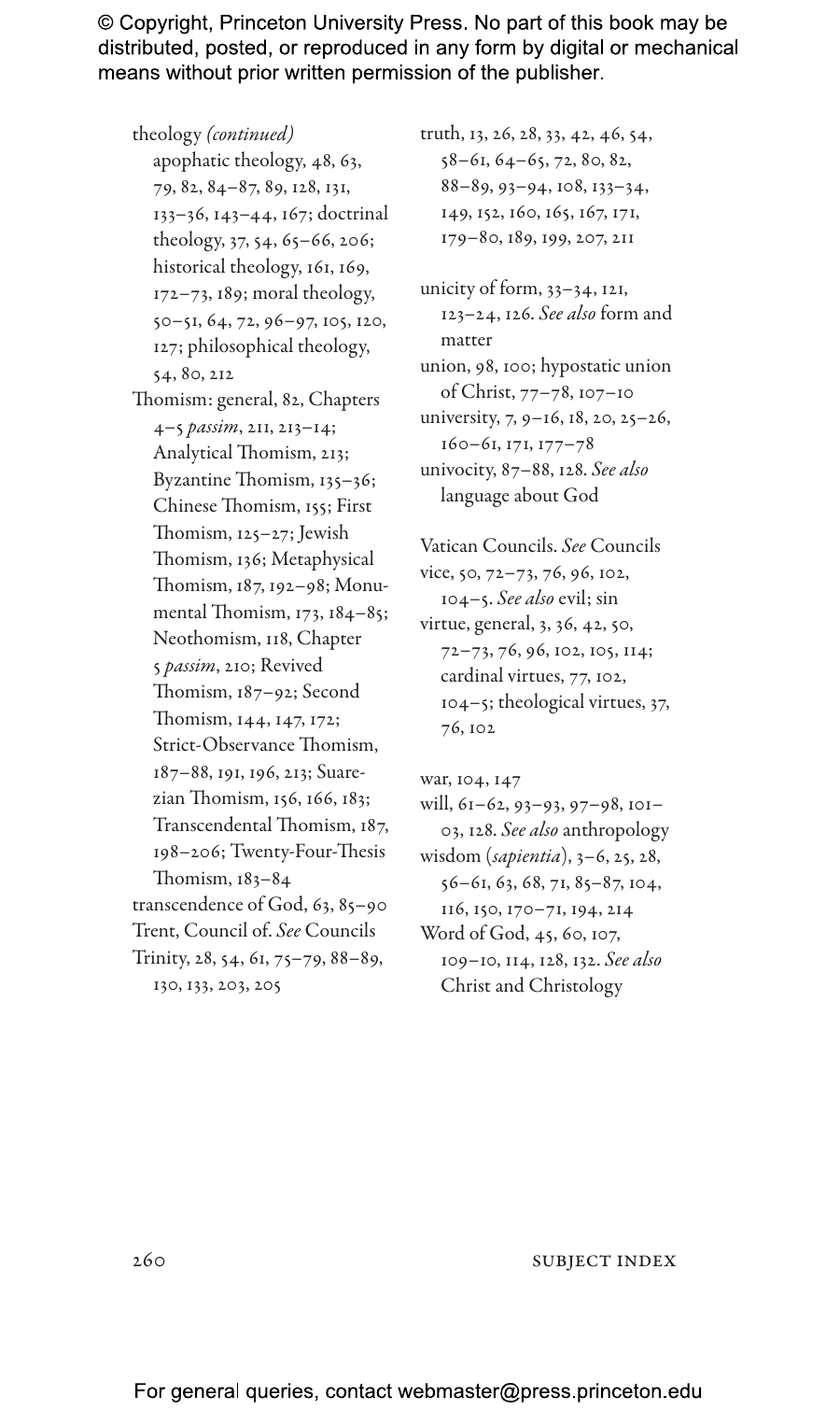 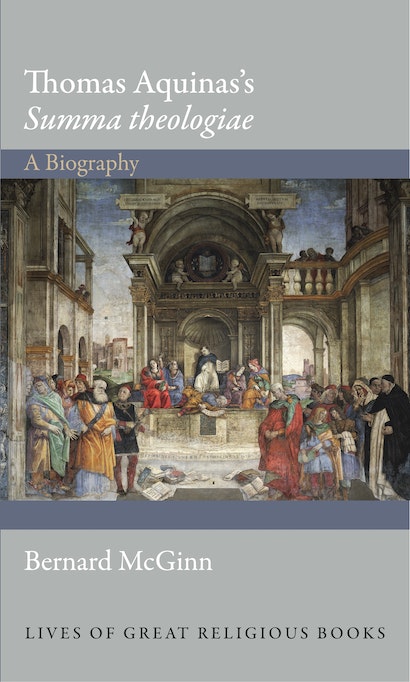 This concise book tells the story of the most important theological work of the Middle Ages, the vast Summa theologiae of Thomas Aquinas, which holds a unique place in Western religion and philosophy. Written between 1266 and 1273, the Summa was conceived by Aquinas as an instructional guide for teachers and novices and a compendium of all the approved teachings of the Catholic Church. It synthesizes an astonishing range of scholarship, covering hundreds of topics and containing more than a million and a half words—and was still unfinished at the time of Aquinas’s death.

Here, Bernard McGinn, one of today’s most acclaimed scholars of medieval Christianity, vividly describes the world that shaped Aquinas, then turns to the Dominican friar’s life and career, examining Aquinas’s reasons for writing his masterpiece, its subject matter, and the novel way he organized it. McGinn gives readers a brief tour of the Summa itself, and then discusses its reception over the past seven hundred years. He looks at the influence of the Summa on such giants of medieval Christendom as Meister Eckhart, its ridicule during the Enlightenment, the rise and fall of Neothomism in the nineteenth and twentieth centuries, the role of the Summa in the post–Vatican II church, and the book’s enduring relevance today.

Tracing the remarkable life of this iconic work, McGinn’s wide-ranging account provides insight into Aquinas’s own understanding of the Summa as a communication of the theological wisdom that has been given to humanity in revelation.

Bernard McGinn is the Naomi Shenstone Donnelley Professor Emeritus of Historical Theology and of the History of Christianity at the Divinity School at the University of Chicago. His many books include Antichrist: Two Thousand Years of the Human Fascination with Evil and The Presence of God, a multivolume history of Western Christian mysticism.

"Introductions to Aquinas abound, but few manage so succinctly to introduce the reader not only to the person and his work, but also to the enduring influence of Aquinas."—Alban McCoy, Tablet

"McGinn's gift is his effort to bring some of the original warmth back into the Summa, first by making it the subject of a biography, reminding us that this great work has had a life of its own. He also argues that the sacra doctrina at the heart of the Summa is best understood in relation to sapientia, or wisdom."—Alden Lee Bass, Englewood Review of Books

"[E]xcellent and beautifully written. . . . There is a long and complicated story to tell here, one in which both friends and foes of Aquinas feature. But McGinn tells it very well while being brief and to the point, and he manages to do so without having a pro-Aquinas or an anti-Aquinas agenda. The result strikes me as a balanced and non-partisan account of considerable value."—Brian Davies, New Blackfriars

"A welcome contribution to Princeton's highly regarded Lives of Great Religious Books series, Bernard McGinn's 'biography' of Thomas's masterwork is a deeply impressive book. Learned, judicious, elegant, a model of expositional economy and analytical clarity, it may be the best brief introduction to the production, structure and content, and reception of the Summa theologiae available in English."—Donald Wood, Religion and Theology

"This biography succinctly covers a vast amount of ground, but it is always accessible and readable and often elegant. It would be an excellent introduction for any newcomer curious about Aquinas's reputation, and it is a handy survey for scholars of the field."—Philip L. Reynolds, Journal of Religion

"This book is a delight to read. It is genuinely extraordinary how much scholarship McGinn managed to distill into this book, which nonetheless remains utterly readable. McGinn has absorbed the best of research, pondered and expounded it, and contributed to it, in a book that must rank as one of the best introductions to Aquinas available."—Rik Van Nieuwenhove, Horizons

"McGinn marvelously presents the context, content, and impact of the Summa theologiae without overwhelming the reader. The book reads delightfully and would be a wonderful introduction for anyone who is interested in, but perhaps intimidated by, Aquinas's massive work."—Rachel Erdman, Sewanee Theological Review

"The Summa theologiae set a defining intellectual mark for the West. Bernard McGinn, in his elegant book, shows how Aquinas's transcendent work resonated through the centuries to remain a necessary measure of thought to this day."—James Carroll, author of Warburg in Rome

"In this wonderfully succinct and readable book, Bernard McGinn has packed extensive information on how the Summa was written, how it has been received over the centuries, and how we should make sense of it today. It is rare to find such a well-balanced and rounded picture of one of our greatest works of theology."—Oliver Davies, King's College London

"There is no better introduction to Aquinas, to his Summa, and to the history of his influence through the ages down to the present. McGinn's learned yet accessible book shows how Aquinas reflected the culture of his times yet rose above it to speak to future generations. By laying out the structure of the Summa and leading readers through its parts, McGinn eases them into one of the world's great theological classics."—John W. O'Malley, author of Trent: What Happened at the Council

"An exceptional achievement. Against the backdrop of his magisterial scholarship—already on display in his multivolume history of mysticism—McGinn offers us both a theoretical and historical introduction to this masterpiece of Christian rationality as well as a balanced appreciation of Thomism."—Jean-Luc Marion, University of Chicago, Institut Catholique de Paris

"Extremely well written. McGinn brings together in concise form much recent work on Aquinas. He provides an accessible introduction to some of the most significant scholarship on the Summa."—Frederick Christian Bauerschmidt, author of Thomas Aquinas: Faith, Reason, and Following Christ