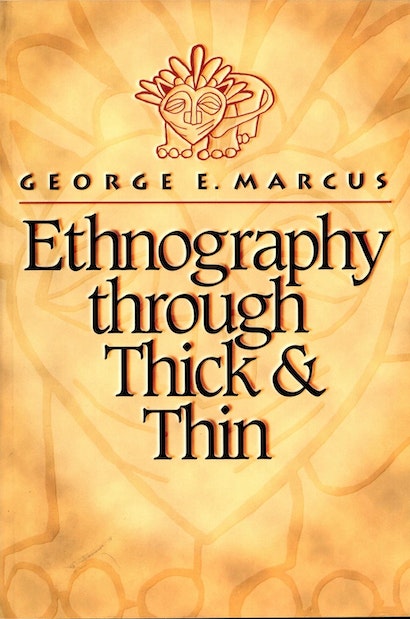 In the 1980s, George Marcus spearheaded a major critique of cultural anthropology, expressed most clearly in the landmark book Writing Culture, which he coedited with James Clifford. Ethnography through Thick and Thin updates and advances that critique for the late 1990s. Marcus presents a series of penetrating and provocative essays on the changes that continue to sweep across anthropology. He examines, in particular, how the discipline’s central practice of ethnography has been changed by “multi-sited” approaches to anthropology and how new research patterns are transforming anthropologists’ careers. Marcus rejects the view, often expressed, that these changes are undermining anthropology. The combination of traditional ethnography with scholarly experimentation, he argues, will only make the discipline more lively and diverse.

The book is divided into three main parts. In the first, Marcus shows how ethnographers’ tradition of defining fieldwork in terms of peoples and places is now being challenged by the need to study culture by exploring connections, parallels, and contrasts among a variety of often seemingly incommensurate sites. The second part illustrates this emergent multi-sited condition of research by reflecting it in some of Marcus’s own past research on Tongan elites and dynastic American fortunes. In the final section, which includes the previously unpublished essay “Sticking with Ethnography through Thick and Thin,” Marcus examines the evolving professional culture of anthropology and the predicaments of its new scholars. He shows how students have increasingly been drawn to the field as much by such powerful interdisciplinary movements as feminism, postcolonial studies, and cultural studies as by anthropology’s own traditions. He also considers the impact of demographic changes within the discipline — in particular the fact that anthropologists are no longer almost exclusively Euro-Americans studying non-Euro-Americans. These changes raise new issues about the identities of anthropologists in relation to those they study, and indeed, about what is to define standards of ethnographic scholarship.

Filled with keen and highly illuminating observations, Ethnography through Thick and Thin will stimulate fresh debate about the past, present, and future of a discipline undergoing profound transformations.

George E. Marcus is Professor of Anthropology at Rice University. Currently, he is producing an innovative series of annuals on contemporary change, Late Editions: Cultural Studies for the End of the Century. He is the coauthor of Anthropology as Cultural Critique (with Michael Fischer) and of Lives in Trust: The Fortunes of Dynastic Families in Late Twentieth-Century America (with Peter Hall). He coedited Writing Culture: The Poetics and Politics of Ethnography with James Clifford. He was also the founding editor of the journal Cultural Anthropology.

"This is an exceptionally significant contribution both to the field of anthropology and to broader discussions among scholars in a range of culture-focused fields. It is a very thoughtful, quirky, empirically compelling, and provocative work by one of the intellectual leaders in our field."—Don Brenneis, University of California, Santa Cruz