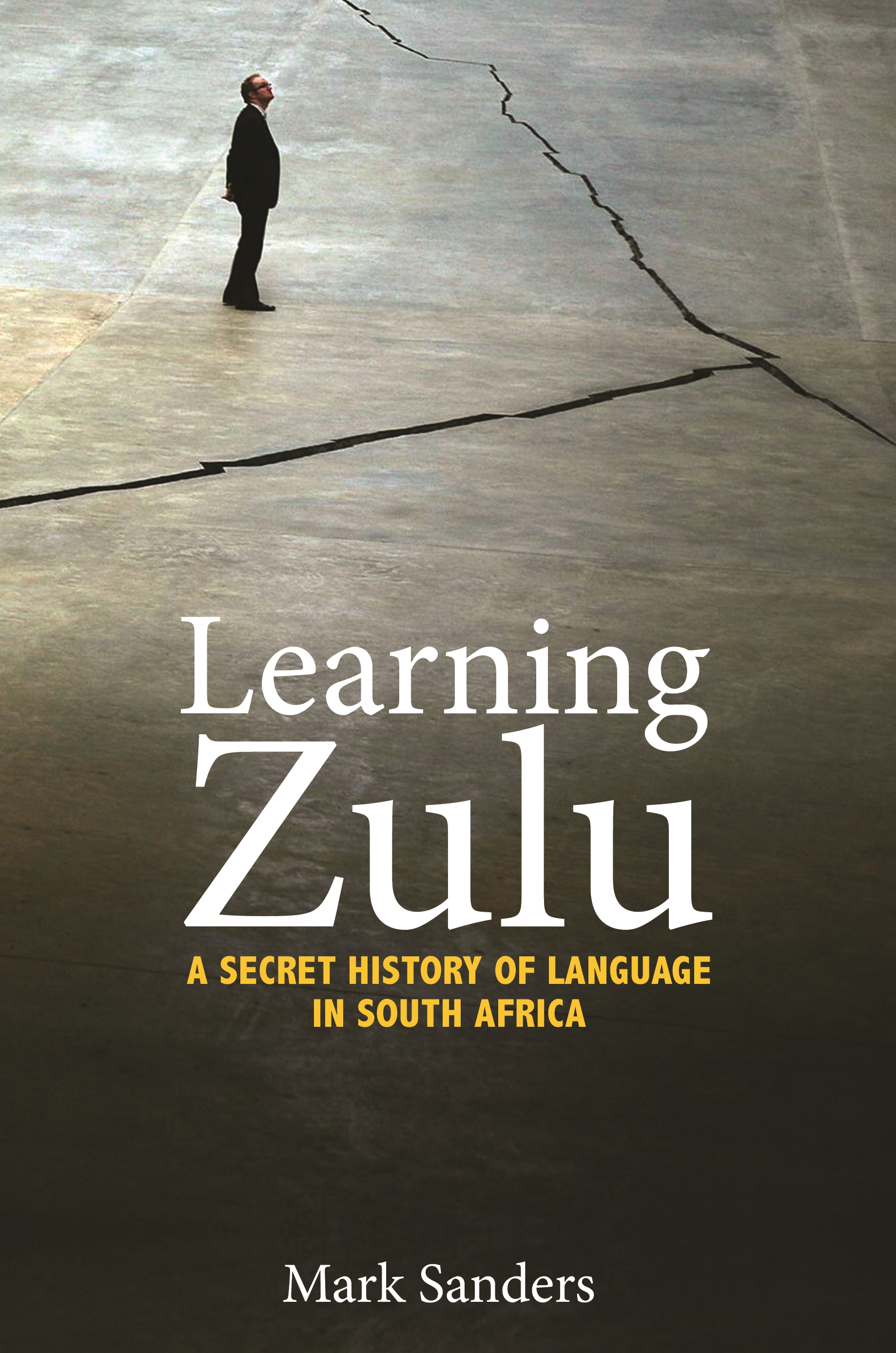 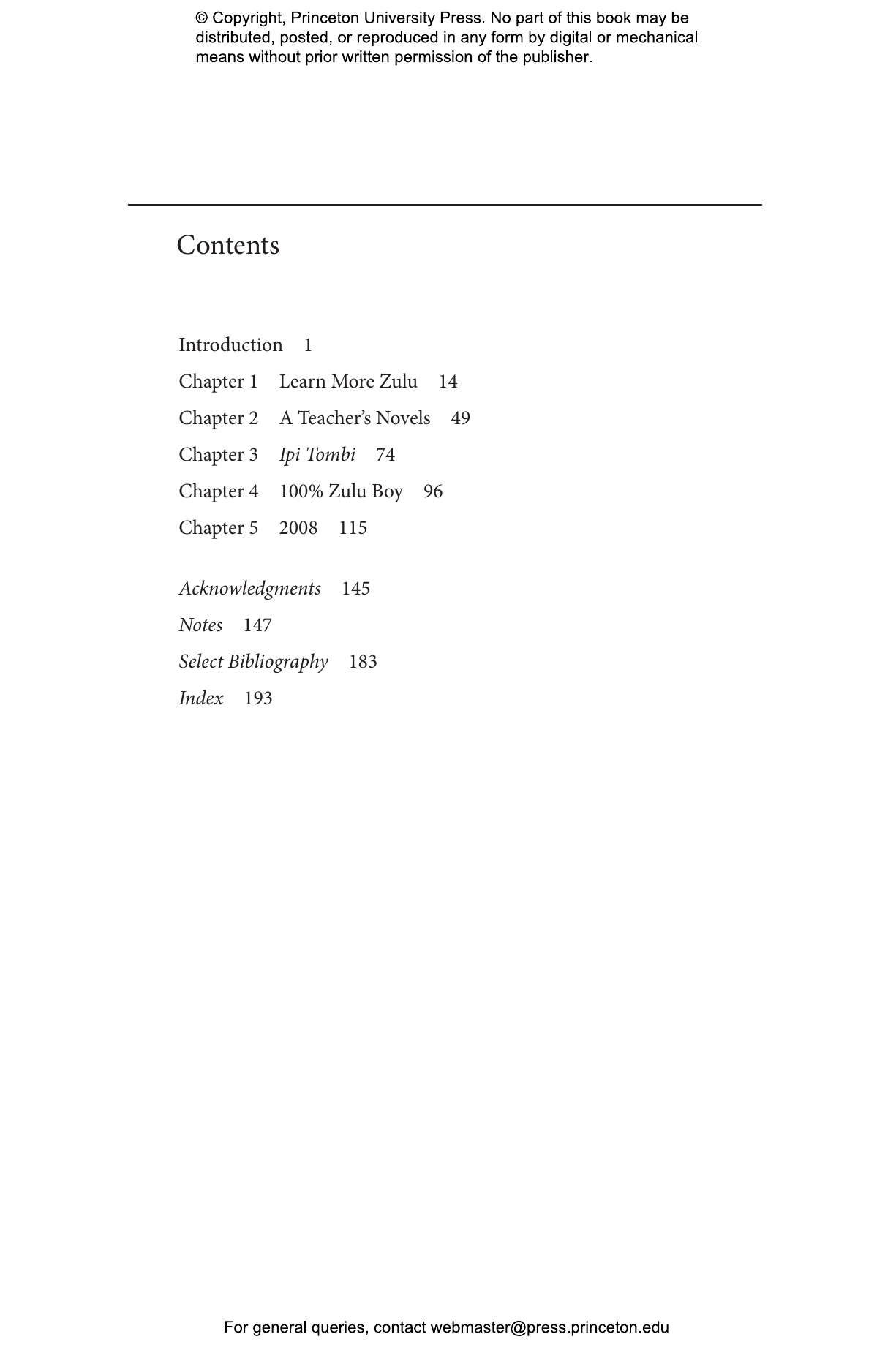 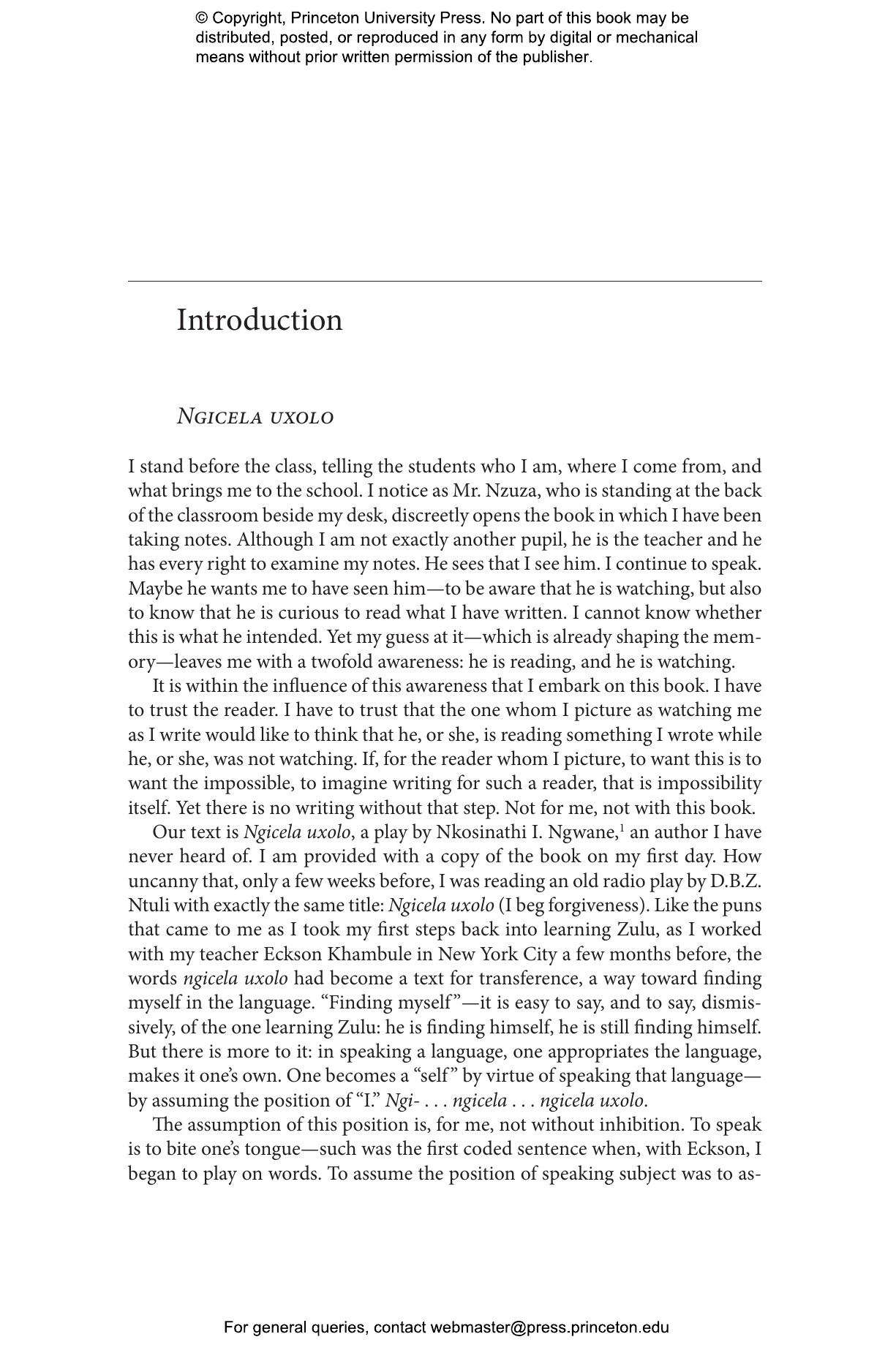 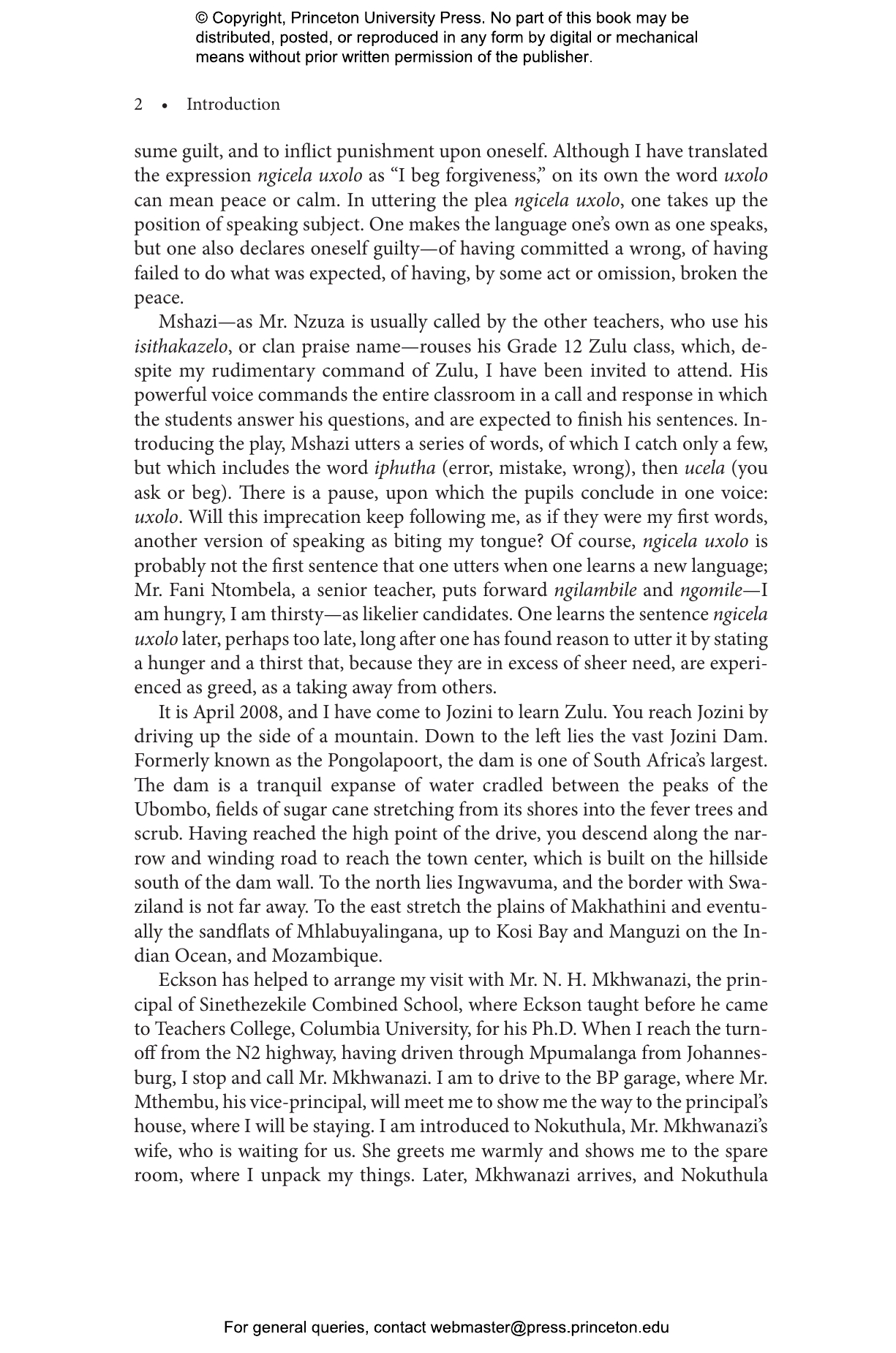 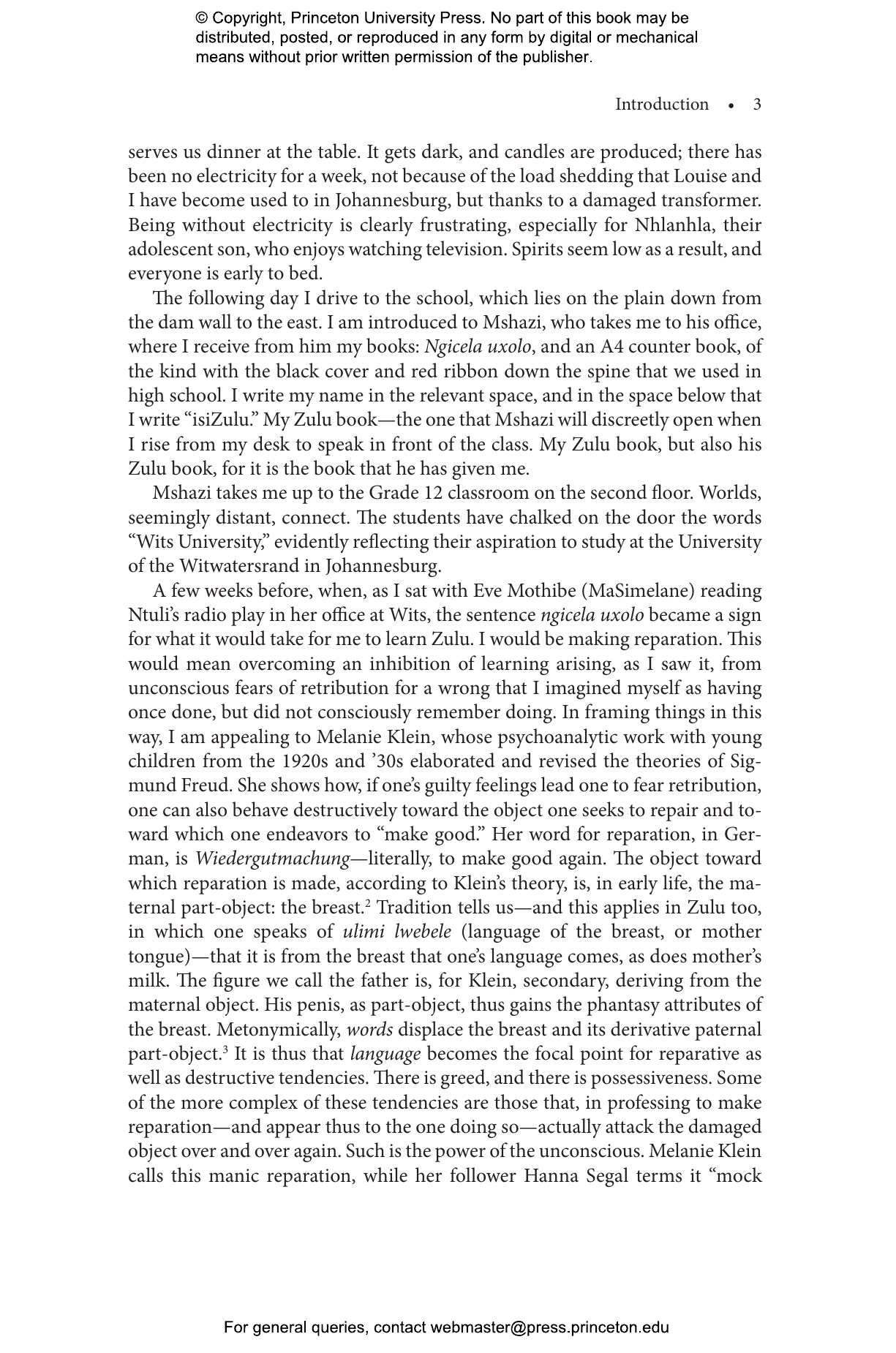 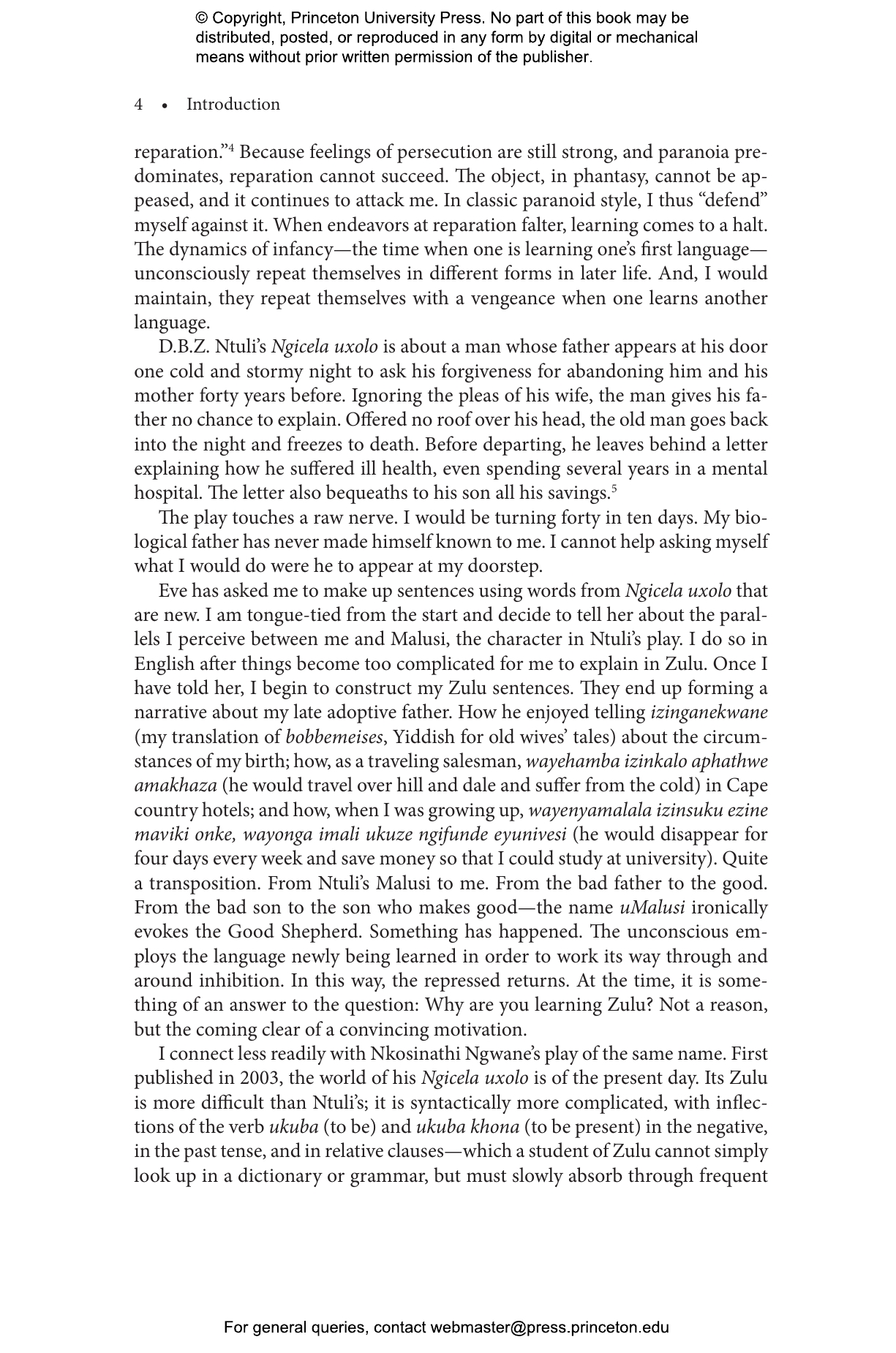 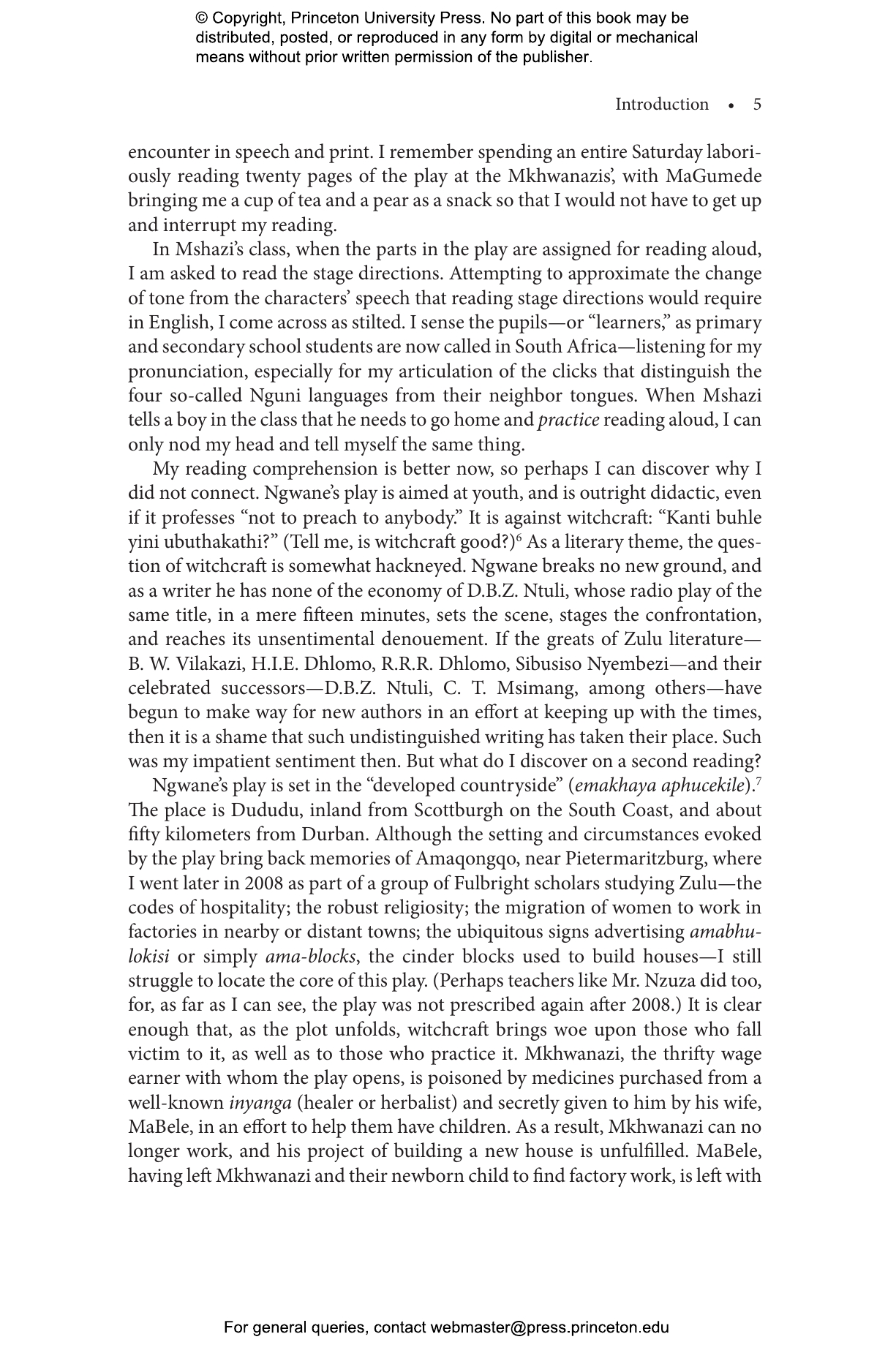 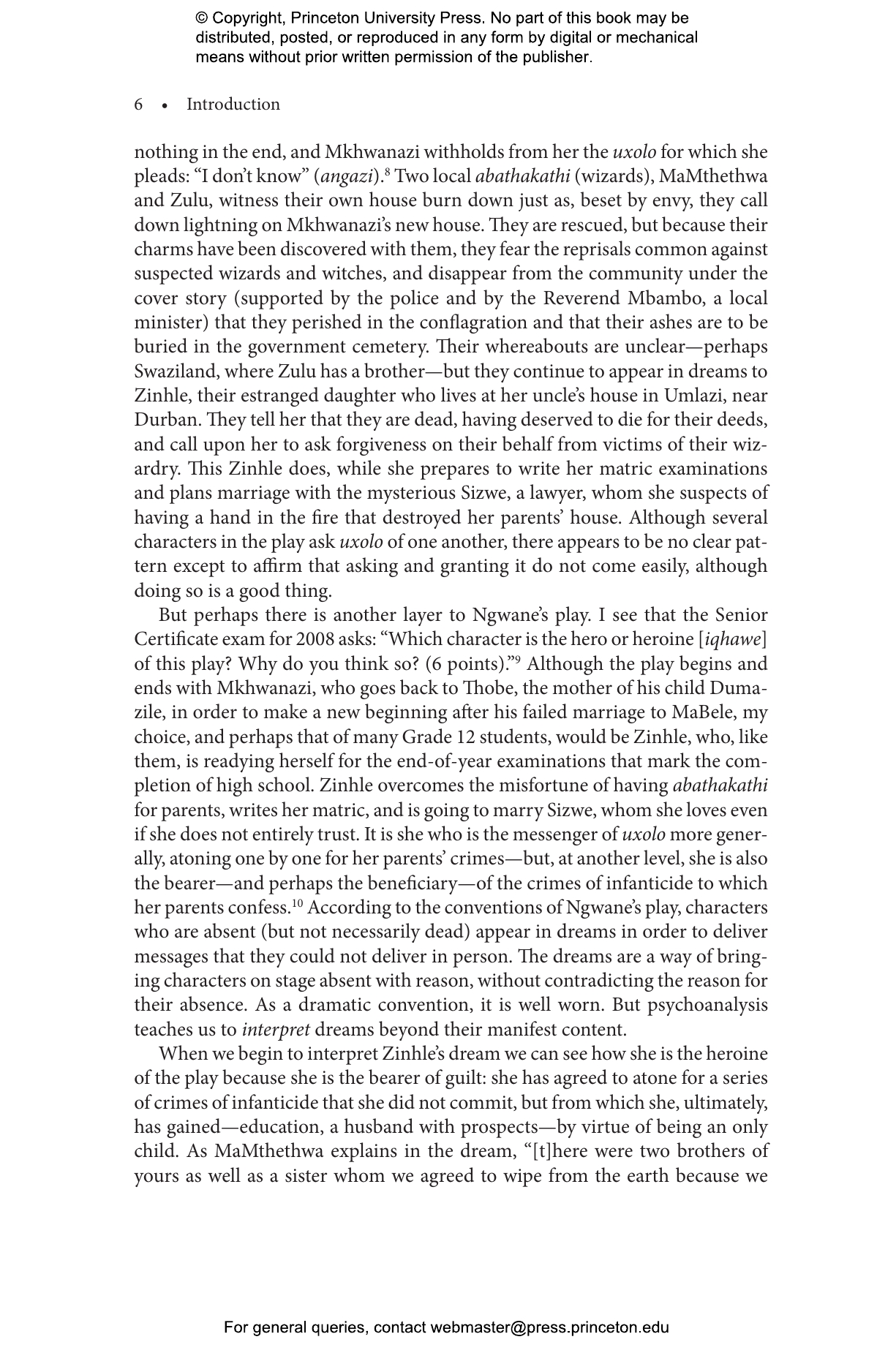 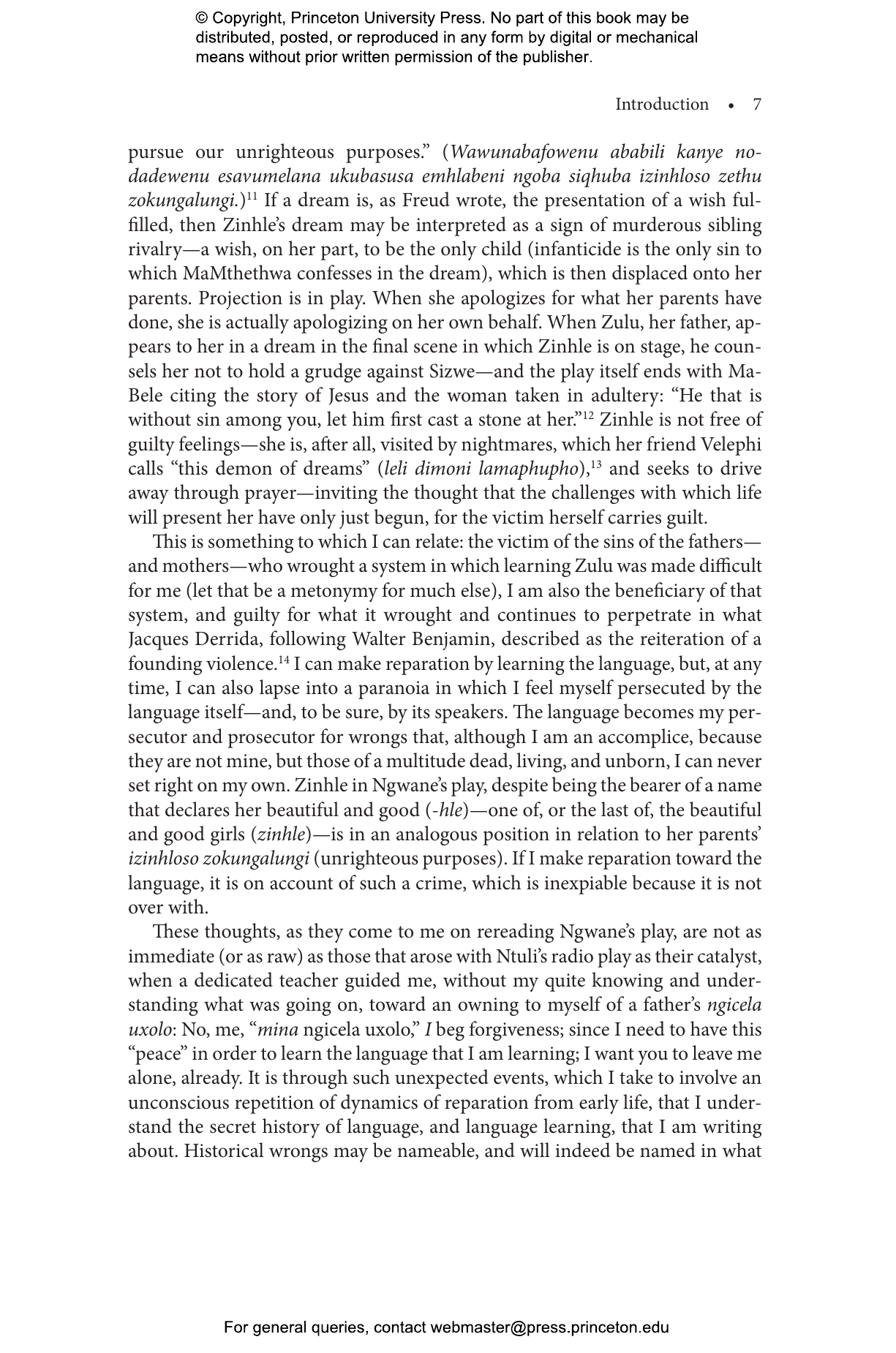 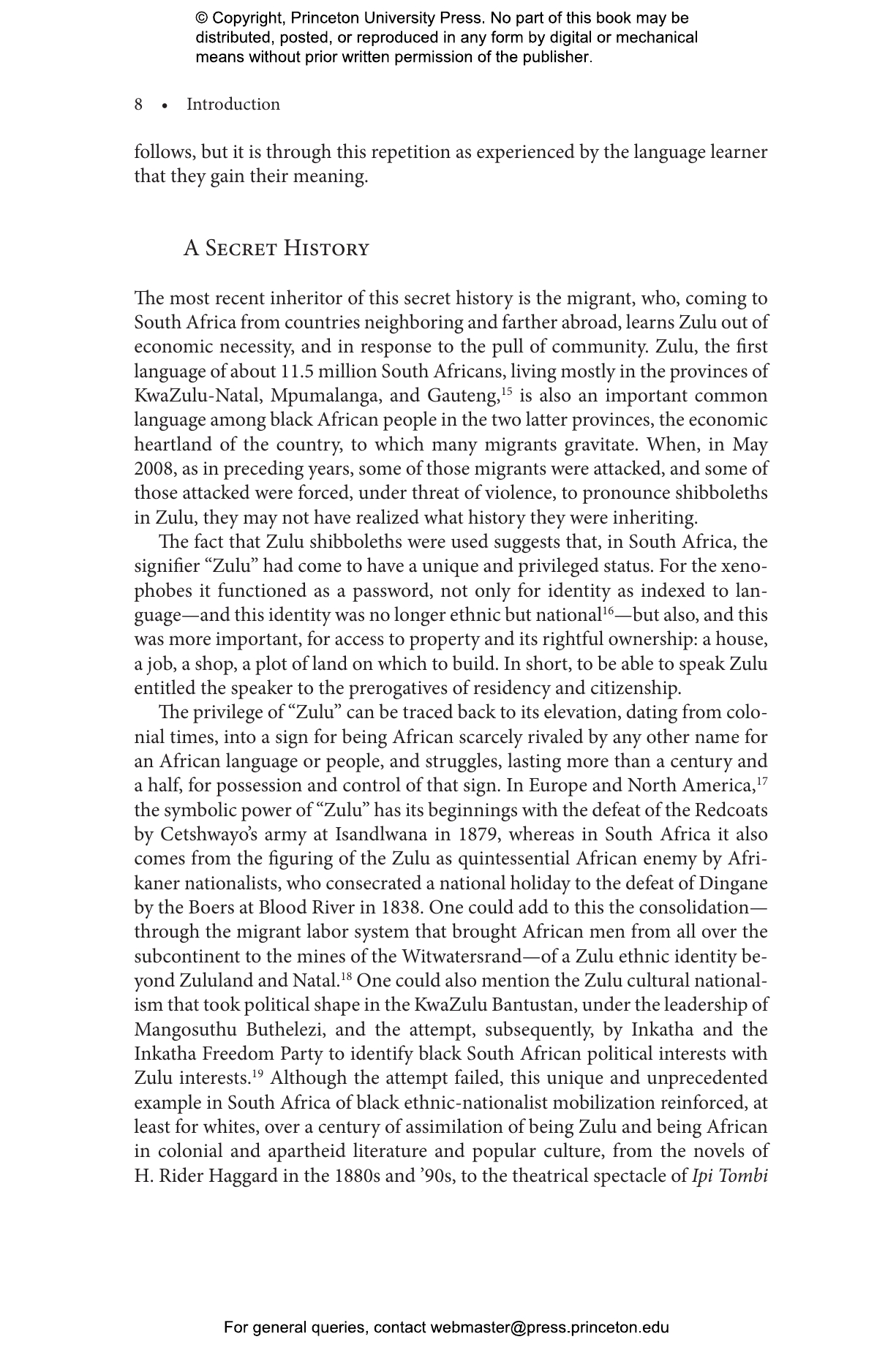 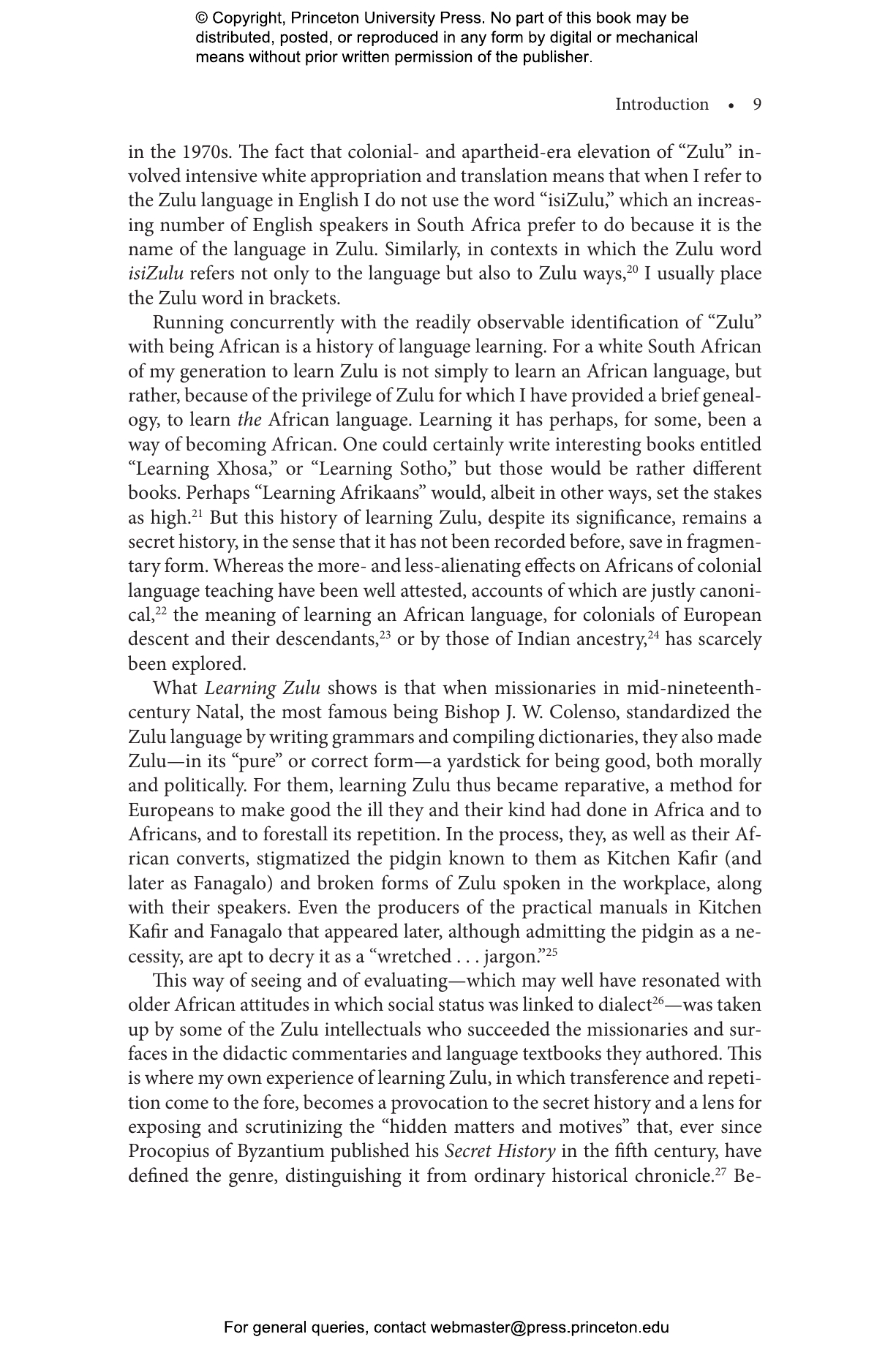 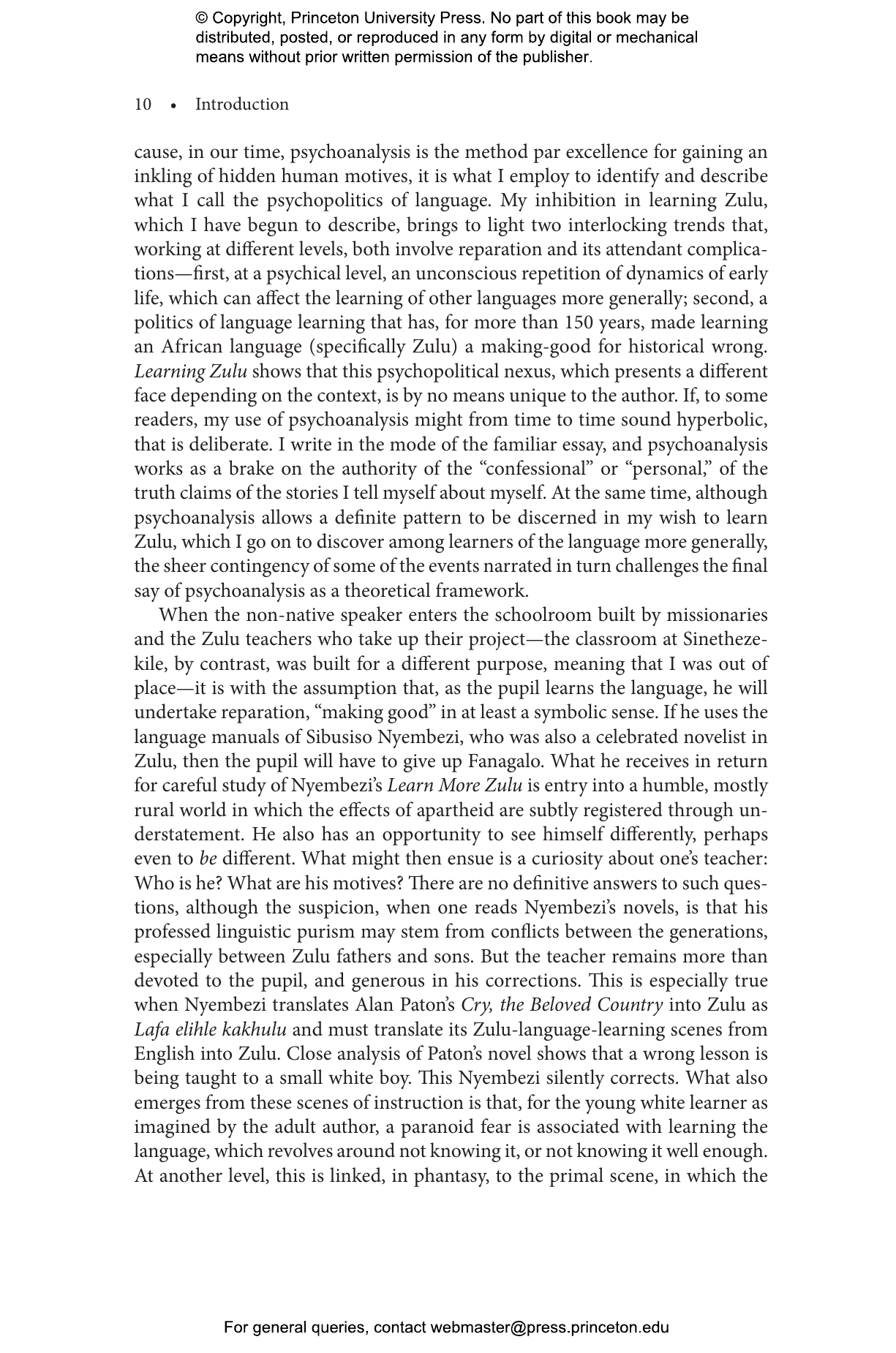 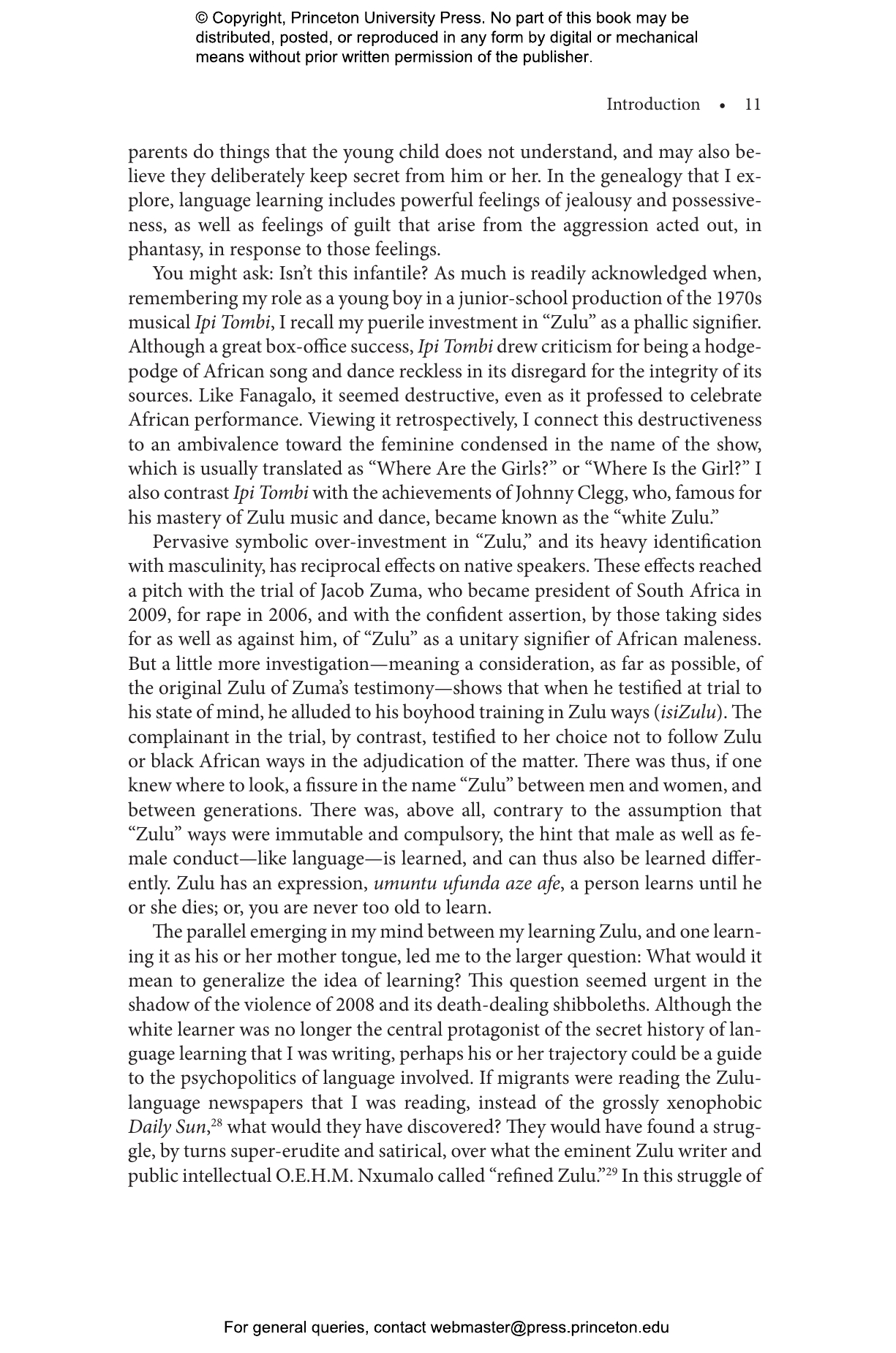 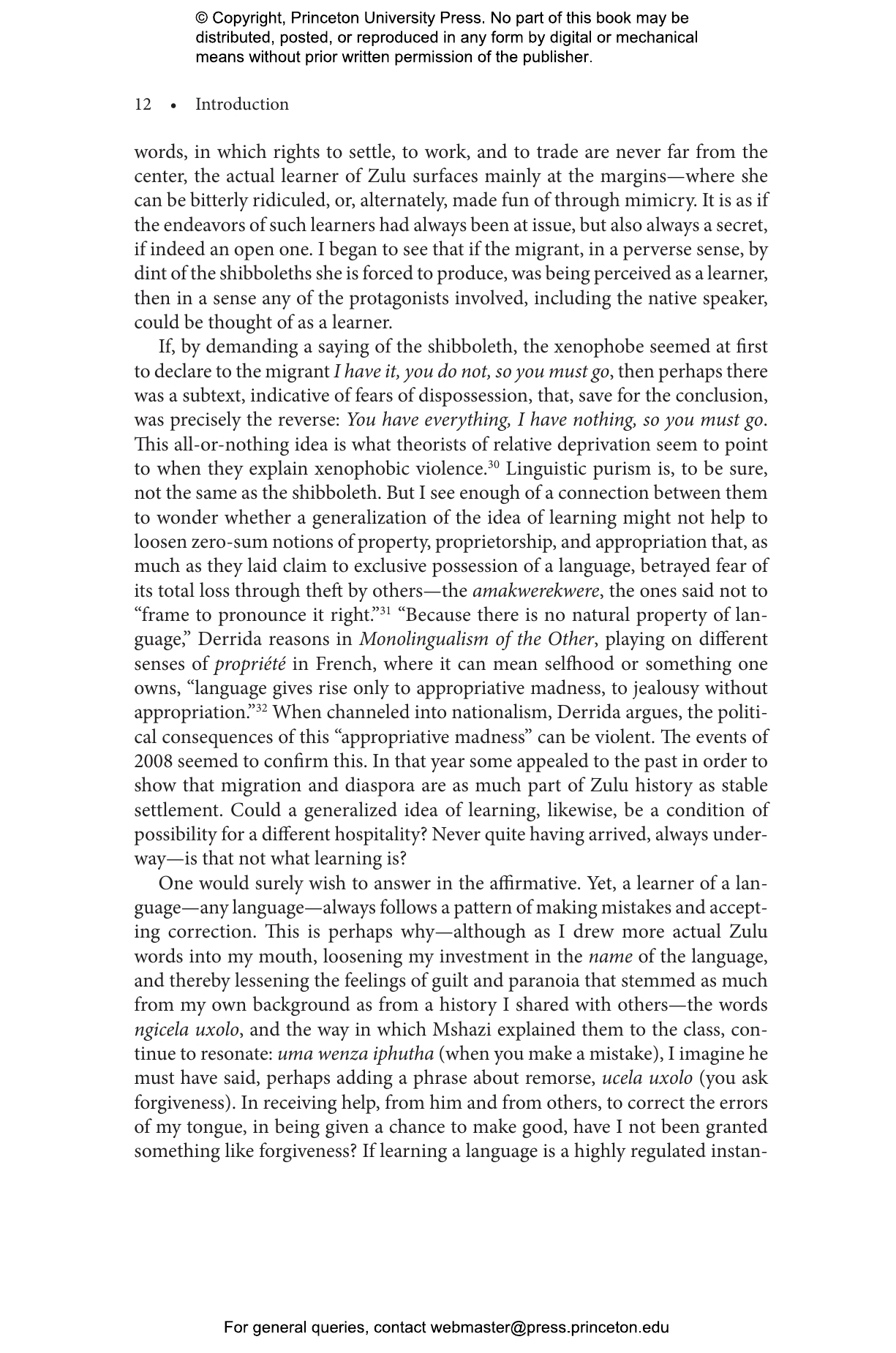 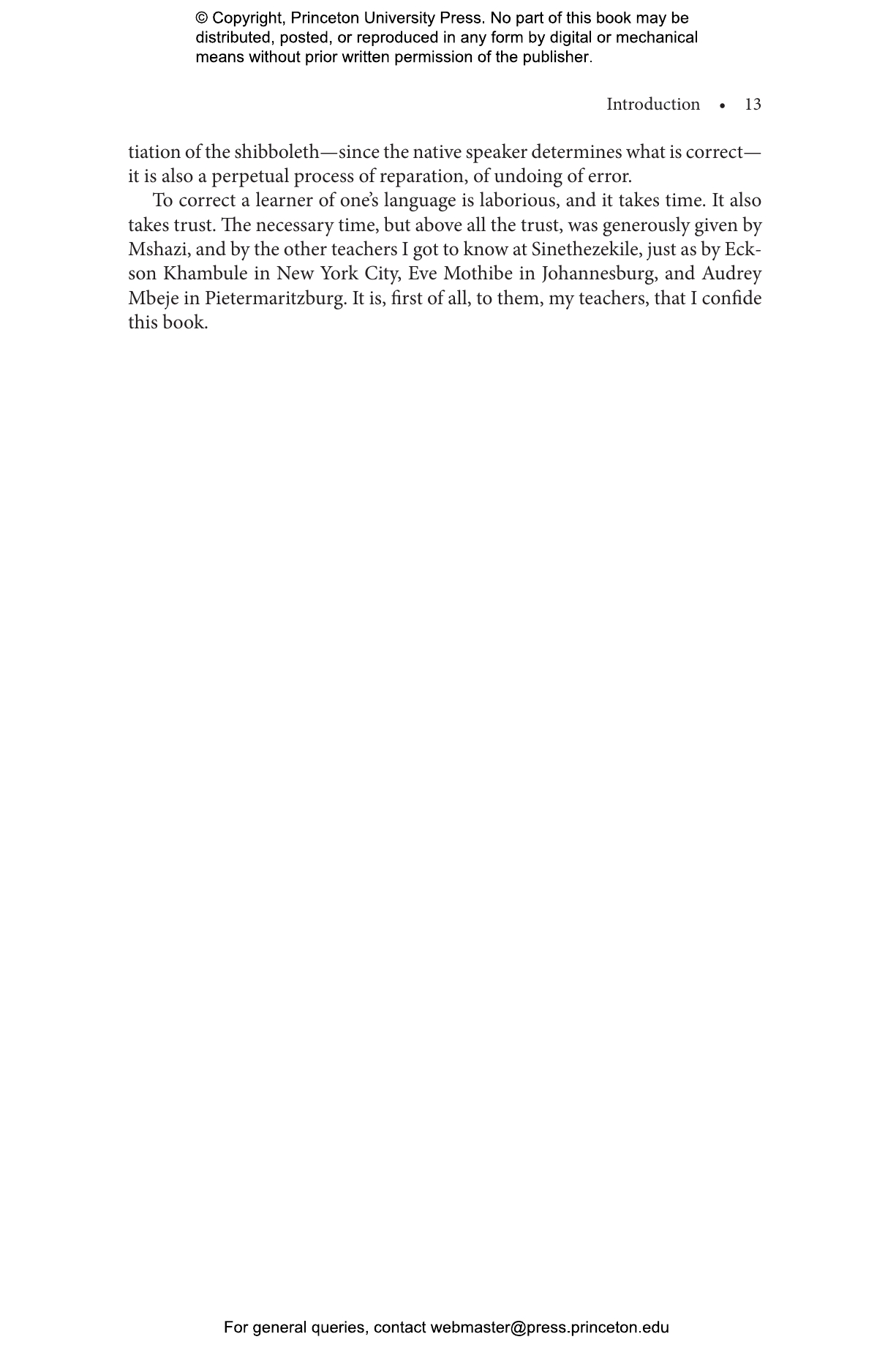 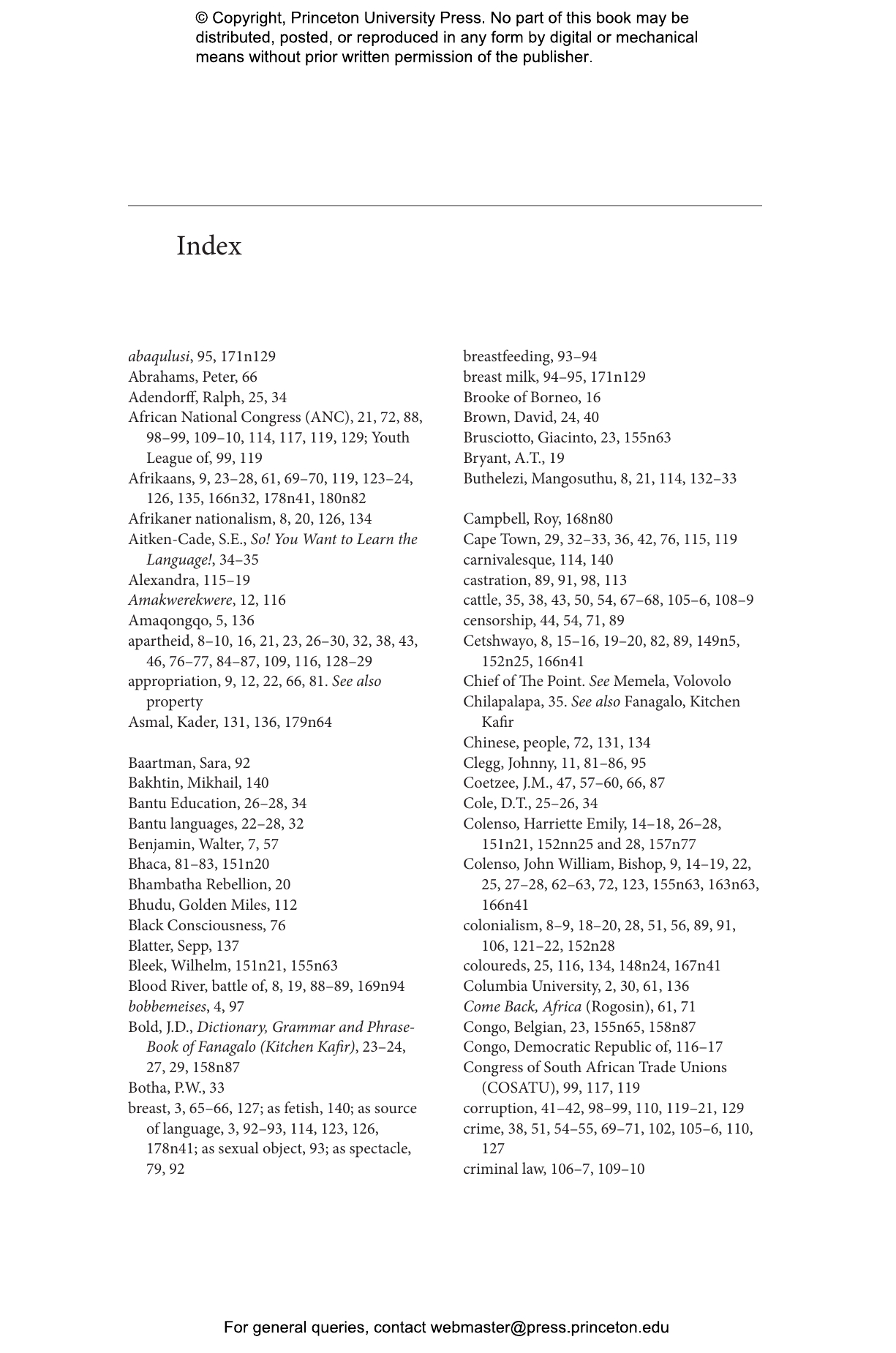 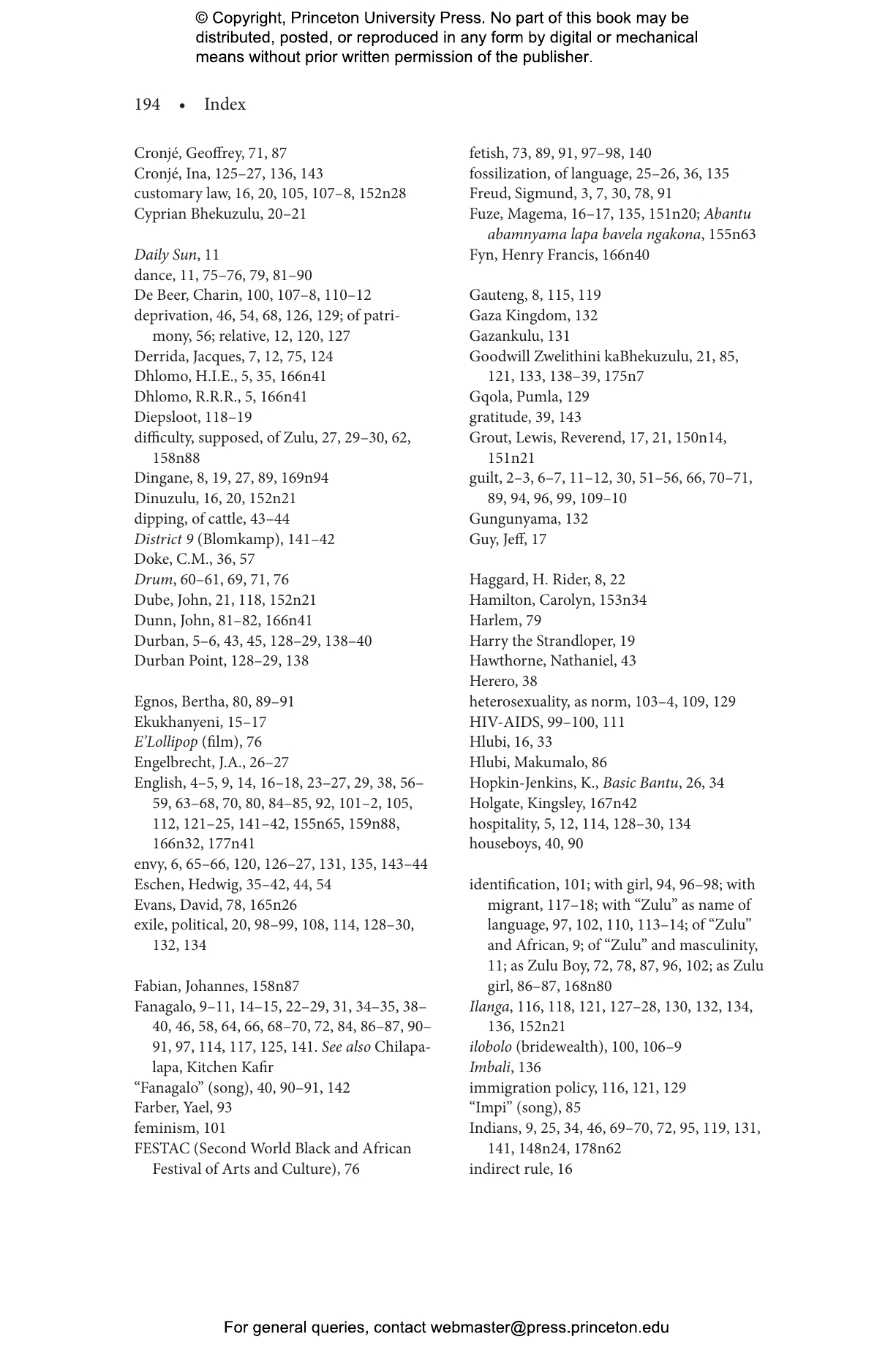 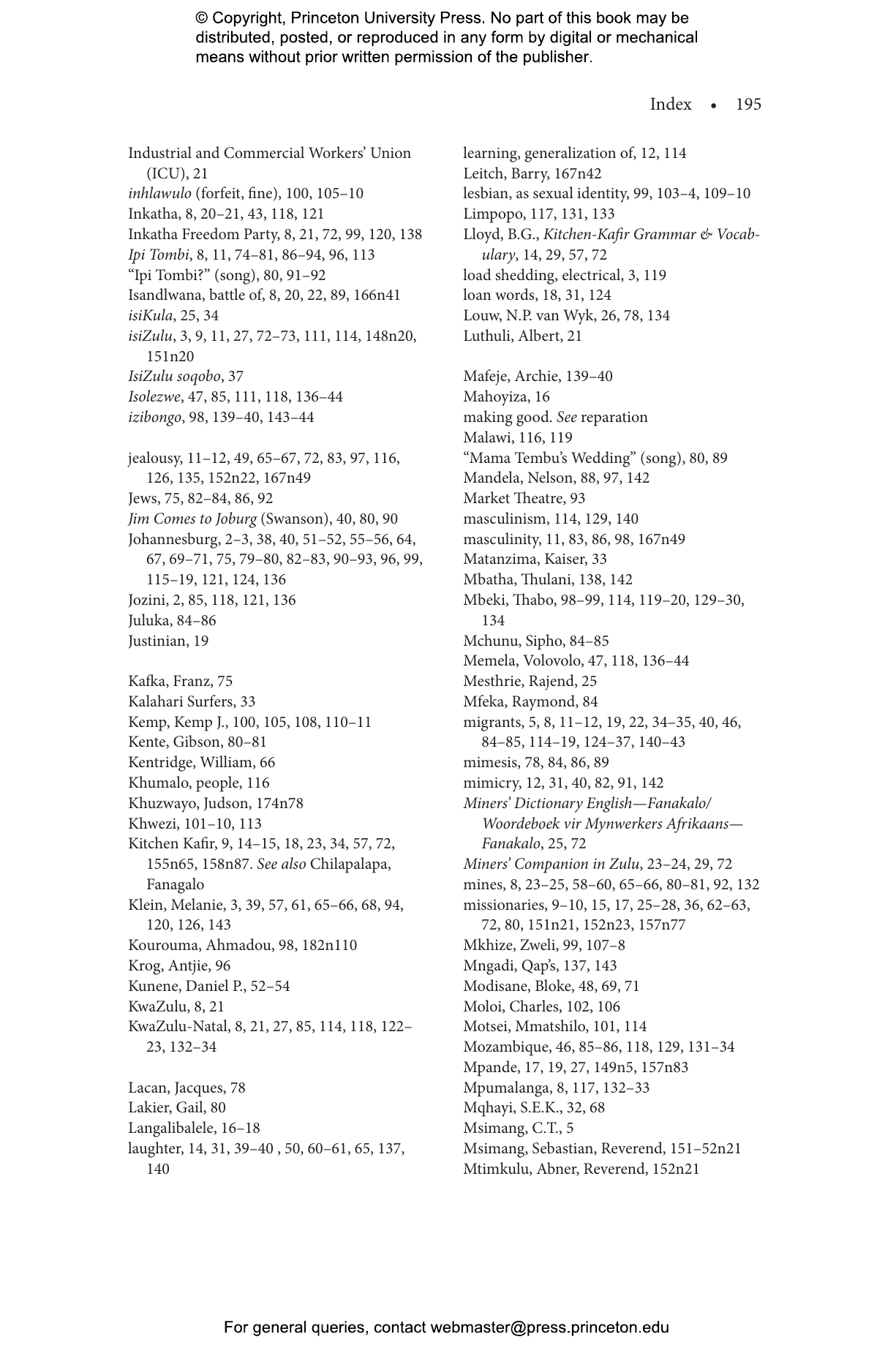 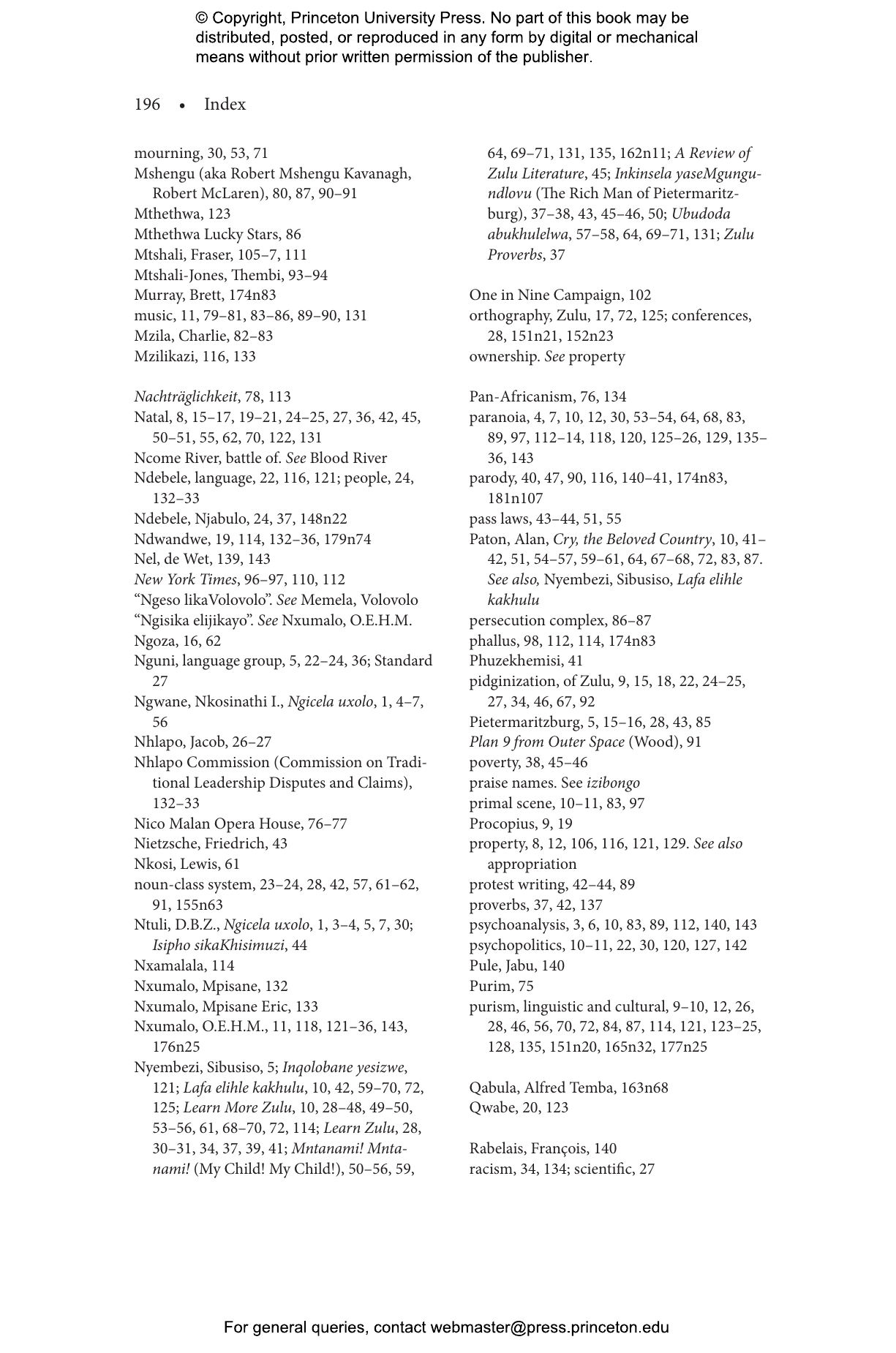 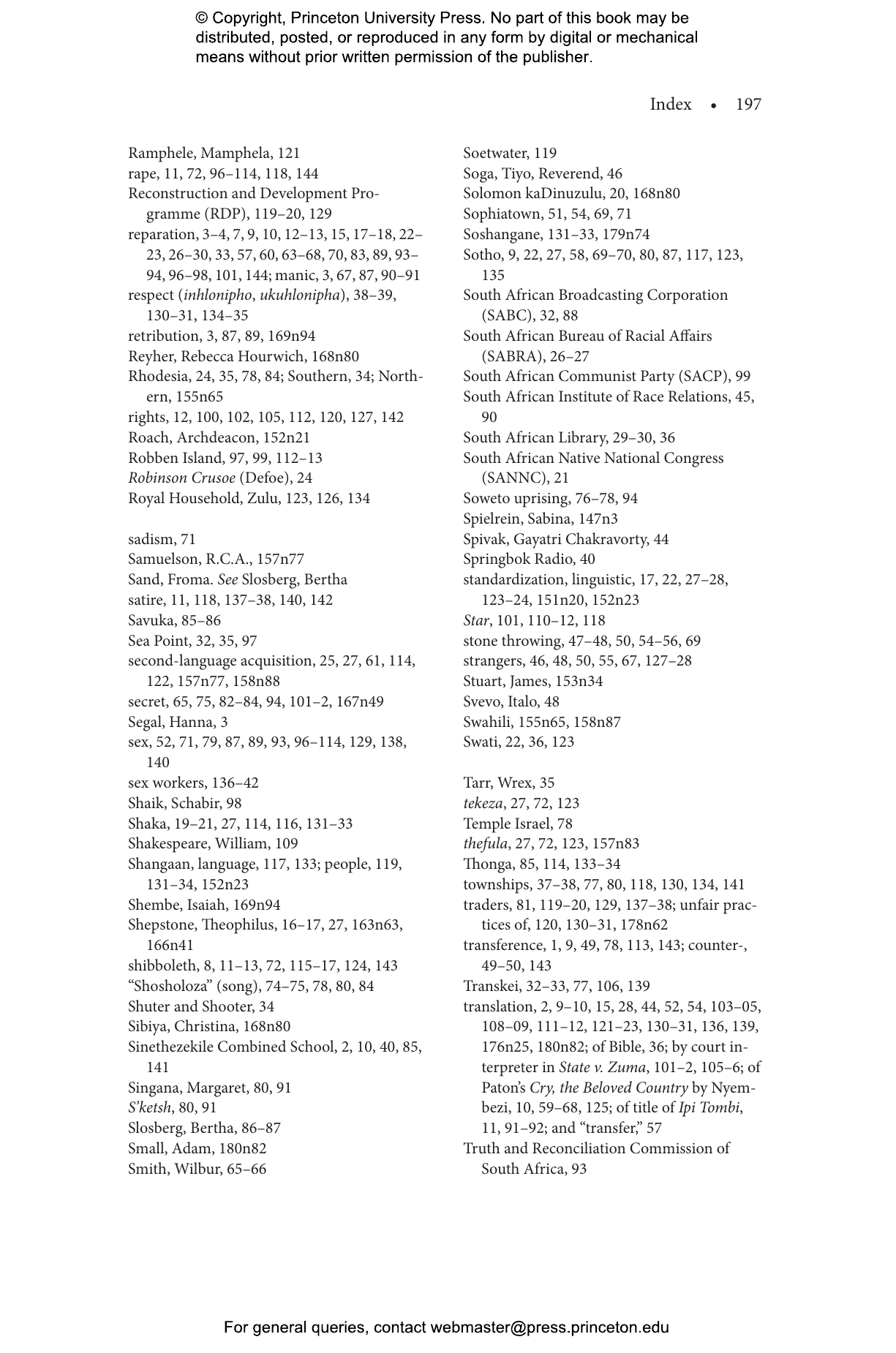 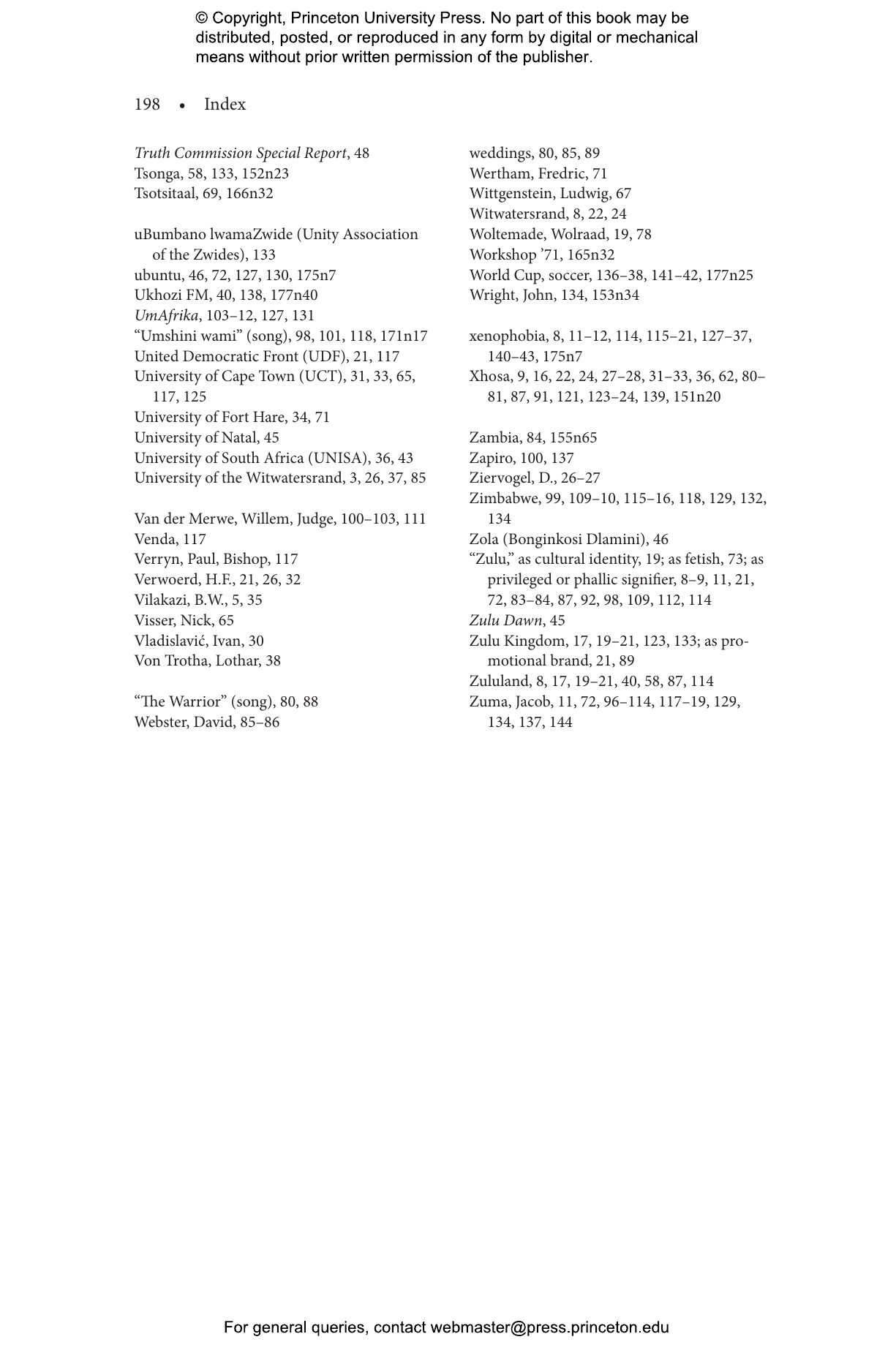 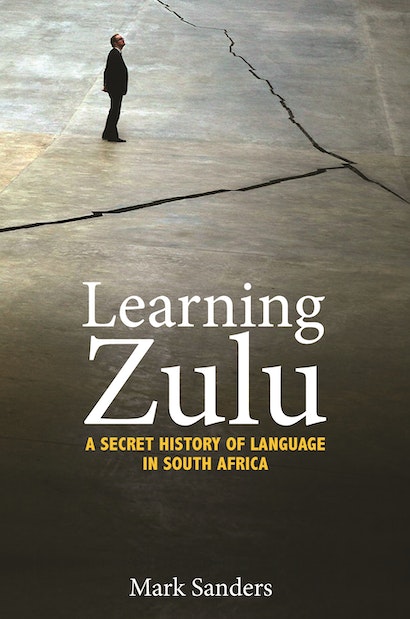 “Why are you learning Zulu?” When Mark Sanders began studying the language, he was often asked this question. In Learning Zulu, Sanders places his own endeavors within a wider context to uncover how, in the past 150 years of South African history, Zulu became a battleground for issues of property, possession, and deprivation. Sanders combines elements of analysis and memoir to explore a complex cultural history.

Perceiving that colonial learners of Zulu saw themselves as repairing harm done to Africans by Europeans, Sanders reveals deeper motives at work in the development of Zulu-language learning—from the emergence of the pidgin Fanagalo among missionaries and traders in the nineteenth century to widespread efforts, in the twentieth and twenty-first centuries, to teach a correct form of Zulu. Sanders looks at the white appropriation of Zulu language, music, and dance in South African culture, and at the association of Zulu with a martial masculinity. In exploring how Zulu has come to represent what is most properly and powerfully African, Sanders examines differences in English- and Zulu-language press coverage of an important trial, as well as the role of linguistic purism in xenophobic violence in South Africa.

Through one person’s efforts to learn the Zulu language, Learning Zulu explores how a language’s history and politics influence all individuals in a multilingual society.

Mark Sanders is professor of comparative literature at New York University. His books include Complicities: The Intellectual and Apartheid and Ambiguities of Witnessing: Law and Literature in the Time of a Truth Commission.

"In this deeply introspective memoir, Sanders focuses on his quest to learn the Zulu language. . . . A valuable resource for history and political science as well as language."—Choice

"Well written and well researched. . . . The book is a good testimony of resistance and survival of the Zulu people, culture, and isiZulu the language."—Shirley Mthethwa-Sommers, African Studies Quarterly

"Ostensibly about one man's quest to acquire a language, Learning Zulu is a clever, surprising, and enlightening journey into 150 years of South African history. Nobody has written quite this subtly about race and language in South Africa in a long while." —Jonny Steinberg, University of Oxford

"Learning Zulu is a brilliant book. Unprecedented in the South African arena and very likely beyond, Sanders's ‘secret history' is nothing less than a sustained tour de force and an extraordinary mix of linguistics, literary criticism, cultural studies, legal studies, psychoanalytic theory, and autobiography/memoir. This is very much a book about the psychic and psychopolitical investments involved in acquiring and teaching language in colonial and postcolonial settings."—Stephen Clingman, University of Massachusetts, Amherst

"Mark Sanders has written a remarkable book that combines analysis and memoir, and mines documentary material and the individual experience of learning Zulu, to unearth the complex and sometimes controversial meanings of Zulu language, culture, and imagery for South Africans and others around the world. Learning Zulu will capture the attention of all readers interested in translation, self-formation, and cultural history in multilingual societies across the globe."—Loren Kruger, University of Chicago

"This book offers a historical account of the Zulu language in South Africa from the nineteenth century to the present. Exploring the psychological significance and symbolic meaning of the language in the South African social imaginary, the work does a real service to the Zulu language and identity by pointing to the richness and complexity of its more recent history. Learning Zulu makes available a wealth of fascinating material."—Gareth Cornwell, Rhodes University