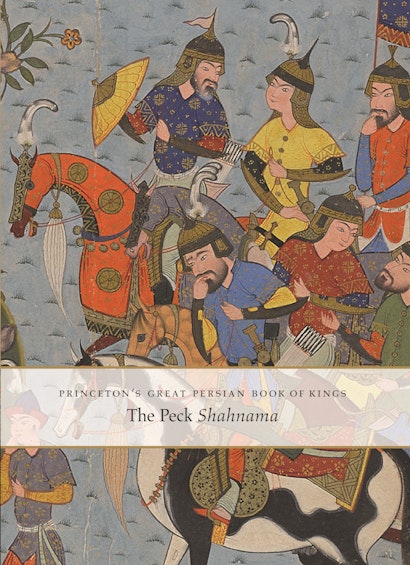 Princeton’s Great Persian Book of Kings presents the first comprehensive examination of a beautifully decorated yet relatively unknown manuscript of the Shahnama (Book of Kings), created in 1589–90 in the flourishing cultural center of Shiraz. Held by Princeton University and called the Peck Shahnama after its donor, the work ranks among the finest intact 16th-century Persian manuscripts in the United States.

Composed more than one thousand years ago, the epic poem Shahnama narrates the story of Iran from the dawn of time to the 7th century A.D. Its 50,000 verses and countless tales of Iran’s ancient kings and heroes have been a vital source of artistic inspiration in Persian culture for centuries. Author Marianna Shreve Simpson offers a detailed discussion of the Peck Shahnama, including its origins, history, and artistic characteristics. All of the manuscript’s intricately illuminated and illustrated folios are reproduced with stunning new photography, and each is accompanied by commentary on its narrative themes and artistic presentation. An essay by Louise Marlow explores the manuscript’s extensive marginal glosses, an unusual feature of the Peck Shahnama.

Marianna Shreve Simpson is a Philadelphia–based independent scholar who has written extensively about Islamic book arts. Louise Marlow is professor of religion and program director for Middle Eastern studies at Wellesley College.