The first study of album-making in the Ottoman empire during the seventeenth century, demonstrating the period’s experimentation, eclecticism, and global outlook 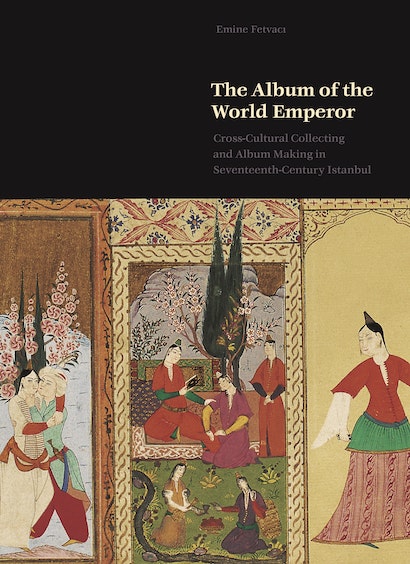 The Album of the World Emperor examines an extraordinary piece of art: an album of paintings, drawings, calligraphy, and European prints compiled for the Ottoman sultan Ahmed I (r. 1603–17) by his courtier Kalender Paşa (d. 1616). In this detailed study of one of the most important works of seventeenth-century Ottoman art, Emine Fetvacı uses the album to explore questions of style, iconography, foreign inspiration, and the very meaning of the visual arts in the Islamic world.

The album’s thirty-two folios feature artworks that range from intricate paper cutouts to the earliest examples of Islamic genre painting, and contents as eclectic as Persian and Persian-influenced calligraphy, studies of men and women of different ethnicities and backgrounds, depictions of popular entertainment and urban life, and European prints depicting Christ on the cross that in turn served as models for apocalyptic Ottoman paintings. Through the album, Fetvacı sheds light on imperial ideals as well as relationships between court life and popular culture, and shows that the boundaries between Ottoman art and the art of Iran and Western Europe were much more porous than has been assumed. Rather than perpetuating the established Ottoman idiom of the sixteenth century, the album shows that this was a time of openness to new models, outside sources, and fresh forms of expression.

Beautifully illustrated and featuring all the folios of the original seventy-page album, The Album of the World Emperor revives a neglected yet significant artwork to demonstrate the distinctive aesthetic innovations of the Ottoman court.

"One of the most intriguing works of Ottoman art is an album of calligraphy, paintings and drawings made for Sultan Ahmed by one of his courtiers. As this study shows, it tells us much about patronage, collecting and the interplay of Ottoman and Persian traditions in the 17th century."—Apollo Magazine

"The Album of the World Emperor is a remarkable contribution to the study of the arts of the book, collecting practices, and imperial self-fashioning in the Islamic world. . . . Fetvaci advances a deeply learned argument that places actual and abstract juxtapositions within Ottoman and Perso-Islamic bookmaking and reading/viewing traditions. It rightly presents its material as 'a local manifestation of the interconnected globe.' It promises to traverse some of the seemingly insurmountable boundaries between art historical fields focusing on Europe and the Islamic world. Fetvaci’s exemplary scholarship should therefore inspire Islamic art historians and early modernists interested in contacts and exchanges more broadly."—Sinem A. Casale, Art Bulletin

"This truly stunning book is a landmark in the field. Fetvacı introduces readers to the album compiled for Ahmed I, which has previously never been systematically studied, and uses the album as a launching pad for cogent arguments about changing tastes and artistic priorities at the seventeenth-century Ottoman court."—Jane Hathaway, author of The Chief Eunuch of the Ottoman Harem

"This expansively researched book closely scrutinizes the Ahmed I album and places it in its broadest cultural, historical, and aesthetic contexts. Offering an insightful and multilayered reading of the conceptual underpinnings of the album's construction, The Album of the World Emperor makes a valuable and original contribution to Islamicate cultural and art history, Ottoman studies, and the history of early modern cultural connections and interactions."—Çiğdem Kafescioğlu, author of Constantinopolis/Istanbul