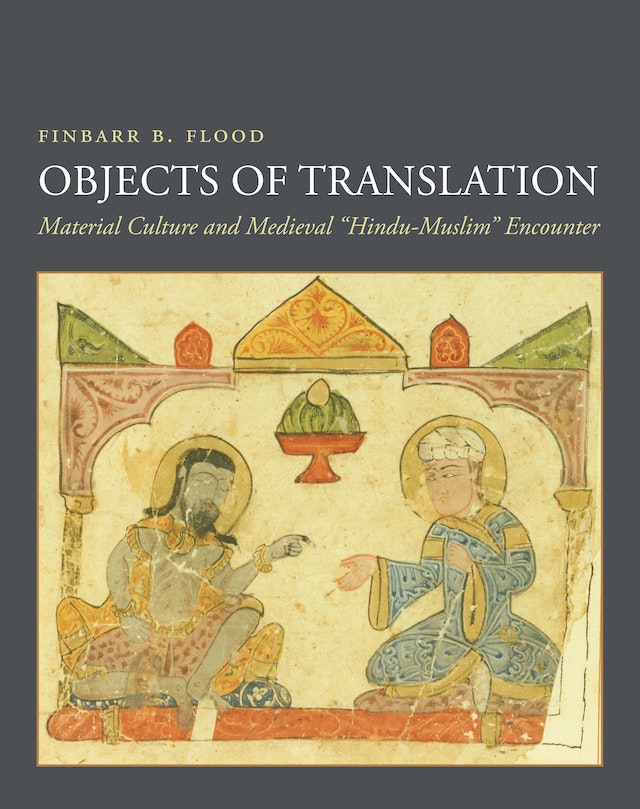 Objects of Translation offers a nuanced approach to the entanglements of medieval elites in the regions that today comprise Afghanistan, Pakistan, and north India. The book — which ranges in time from the early eighth to the early thirteenth centuries — challenges existing narratives that cast the period as one of enduring hostility between monolithic “Hindu” and “Muslim” cultures. These narratives of conflict have generally depended upon premodern texts for their understanding of the past. By contrast, this book considers the role of material culture and highlights how objects such as coins, dress, monuments, paintings, and sculptures mediated diverse modes of encounter during a critical but neglected period in South Asian history.

The book explores modes of circulation — among them looting, gifting, and trade — through which artisans and artifacts traveled, remapping cultural boundaries usually imagined as stable and static. It analyzes the relationship between mobility and practices of cultural translation, and the role of both in the emergence of complex transcultural identities. Among the subjects discussed are the rendering of Arabic sacred texts in Sanskrit on Indian coins, the adoption of Turko-Persian dress by Buddhist rulers, the work of Indian stone masons in Afghanistan, and the incorporation of carvings from Hindu and Jain temples in early Indian mosques. Objects of Translation draws upon contemporary theories of cosmopolitanism and globalization to argue for radically new approaches to the cultural geography of premodern South Asia and the Islamic world.

Finbarr Barry Flood is the William R. Kenan, Jr., Professor of the Humanities in the Department of Art History and the Institute of Fine Arts, and founder-director of Silsila: Center for Material Histories at New York University. His books include Piety and Politics in the Early Indian Mosque and The Great Mosque of Damascus.

"This brilliant book does many things well, but two stand out. It is an overview of the art, especially architecture and architectural decoration, of what is now northern India, Pakistan, and Afghanistan from the eighth to the thirteenth centuries—from the arrival of Islam to the eve of the Mongol conquests. It is also a trenchant essay of interpretation, substituting a richly textured consideration of cultural dynamics and cultural change on a theoretical level for the traditional dichotomy of Hindu versus Muslim. . . . Nothing is comparable to this deeply learned, engrossing, and well-written albeit often challenging work, which is full of compelling discussions of important monuments. It deserves a wide readership."—L. Nees, Choice

"[A] brilliant, far-ranging study. . . . This book is essential reading for anyone who seeks to understand the medieval 'Hindu-Muslim' encounter."—John E. Cort, Religious Studies Review

"Flood's is an outstanding book and its level of scholarship is far in excess of any other work on medieval Indian history that I am aware of. It is a book that gladdens one's heart as much as it enriches one's mind."—Harbans Mukhia, Medieval History Journal

"This book will not only be of interest to scholars of material culture, art and architectural history, religion, and medieval history, but is also entirely relevant to scholars of modern South Asia. In its insistence on mobility—of objects, people, and ideas—and resistance to boundaries, Flood's book is a timely reminder that global mobility is hardly a new phenomenon."—Preeti Chopra, Contemporary South Asia

"This book is a most welcomed addition to the still meager though growing number of studies in Islamic art and material culture, which are based on theoretical premises and on a close, comparative scrutiny of multiple visual objects and texts. . . . [D]ue to its rich material and novel ideas, this book is a necessary asset in the library of historians and art historians of the Muslim world and India, and a useful text-book in academic teaching, hard to read but fully rewarding."—Rachel Milstein, Jerusalem Studies in Arabic and Islam

"Complete, intelligent, and original, Objects of Translation is a remarkable achievement. This book is of such importance for the histories of India and the Islamic world, as well as for theories of culture and language, that it will be essential to all those who want to understand how different cultures interact with one another."—Oleg Grabar, professor emeritus, Institute for Advanced Study

"With nuance and subtlety, Objects of Translation joins other recent books in challenging the validity of projecting present-day conflicts onto the earliest encounters between Indians and Persianized Turks. The author cites from an enormous range of materials and evidence, and he brings them all together in an intelligent synthesis."—Richard M. Eaton, University of Arizona

"Objects of Translation demonstrates the complex variability of cultural interaction between Muslims and Hindus in medieval India. It is Flood's willingness to tell the whole story—rightly stressing the creativity, but not ignoring the conflicts—that makes the book such a compelling and important work of historical scholarship."—Phillip B. Wagoner, Wesleyan University

"This smart and engaging book will be invaluable to readers who seek an interdisciplinary approach to the understanding of art and culture, especially in border zones where the most exciting artistic breakthroughs often occur. Comprehensive, creative, and lively, it will be read by scholars of Indian and Islamic art, and educate our next generation of undergraduate and graduate students in a more holistic context."—Eva R. Hoffman, Tufts University