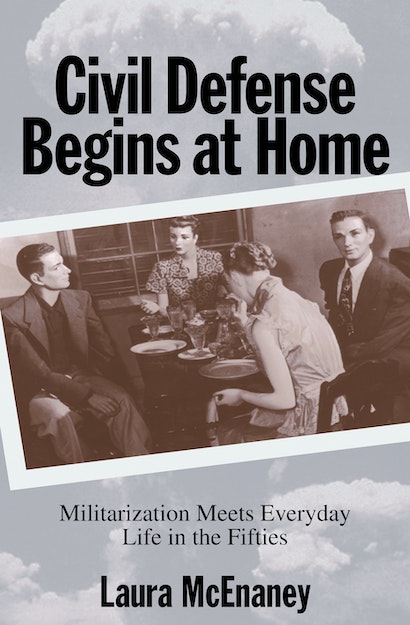 Dad built a bomb shelter in the backyard, Mom stocked the survival kit in the basement, and the kids practiced ducking under their desks at school. This was family life in the new era of the A-bomb. This was civil defense. In this provocative work of social and political history, Laura McEnaney takes us into the secretive world of defense planners and the homes of ordinary citizens to explore how postwar civil defense turned the front lawn into the front line. The reliance on atomic weaponry as a centerpiece of U.S. foreign policy cast a mushroom cloud over everyday life. American citizens now had to imagine a new kind of war, one in which they were both combatants and targets. It was the Federal Civil Defense Administration’s job to encourage citizens to adapt to their nuclear present and future.

As McEnaney demonstrates, the creation of a civil defense program produced new dilemmas about the degree to which civilian society should be militarized to defend itself against internal and external threats. Conflicts arose about the relative responsibilities of state and citizen to fund and implement a home-front security program. The defense establishment’s resolution was to popularize and privatize military preparedness. The doctrine of “self-help” defense demanded that citizens become autonomous rather than rely on the federal government for protection. Families would reconstitute themselves as paramilitary units that could quash subversion from within and absorb attack from without.

Because it solicited an unprecedented degree of popular involvement, the FCDA offers a unique opportunity to explore how average citizens, community leaders, and elected officials both participated in and resisted the creation of the national security state. Drawing on a wide variety of archival sources, McEnaney uncovers the broad range of responses to this militarization of daily life and reveals how government planners and ordinary people negotiated their way at the dawn of the atomic age. Her work sheds new light on the important postwar debate about what total military preparedness would actually mean for American society.

Laura McEnaney is Assistant Professor of History at Whittier College in California.

"A thought-provoking and richly empirical study of the evolution of civil defense and its implications for American citizens and their government during the first full decade of the nuclear age . . . McEnaney's book is an absolute must-read for those interested in nuclear history, the social history of the 1950s, as well as gender and race analyses."—Paul G. Pierpaoli, Military History

"[A] chilling study of the militarization of the American home under the civil defense policies of the Cold War."—Tom Vanderbilt, Bookforum

"McEnaney's well-researched and well-written monograph adds to our understanding of the Cold War, the 1950s, and the relationship between military and domestic policy. Her analysis of gender, race and class adds significant dimensions to the current literature."—D'Ann Campbell, The Journal of American History

"An important book that examines both the historical roots of Cold War political development in the United States and the effects of domestic Cold War mobilization on American society. I highly recommend Civil Defense Begins at Home to anyone interested in this important phase of postwar American political development. This book will be an excellent addition to advanced undergraduate courses as well as graduate courses in history, political science, and American studies."—Andrew D. Grossman, Journal of Cold War Studies

"The book focuses on the political culture in which [Civil Defense] activists sought to devise a program, pry support from a stingy Congress, and evangelize the public. . . . [It is] admirably well researched often imaginative, and always interesting."—Richard M. Fried, American Historical Review

"[A] superb social history of American civil defense programs in the 1950s. . . . I highly recommend [the book] to anyone interested in this important phase of postwar American political development."—Andrew D. Grossman, Journal of Cold War Studies

"This book argues compellingly that the debate over civil defense in the 1950s contributed significantly to the militarization of American culture. McEnaney's real contribution is to broaden our understanding of military and domestic policy in the 1950s. Her work on gender is extremely important here, and her final chapter on race and class adds an important dimension to our sense of Cold War military policy."—Allan M. Winkler, Miami University