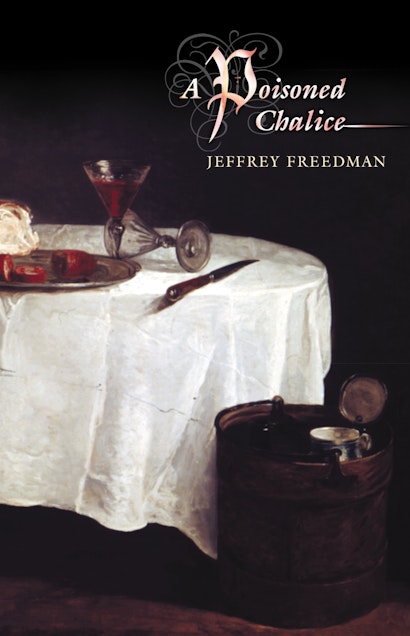 A Poisoned Chalice tells the story of a long-forgotten criminal case: the poisoning of the communion wine in Zurich’s main cathedral in 1776. The story is riveting and mysterious, full of bizarre twists and colorful characters — an anti-clerical gravedigger, a hard-drinking drifter, a defrocked minister — who come to life in a series of dramatic criminal trials. But it is also far more than just a good story. In the wider world of German-speaking Europe, writes Jeffrey Freedman, the affair became a cause célèbre, the object of a lively public debate that focused on an issue much on the minds of intellectuals in the age of Enlightenment: the problem of evil.


Contemporaries were unable to ascribe any rational motive to an attempt to poison hundreds of worshippers. Such a crime pointed beyond reason to moral depravity so radical it seemed diabolic. By following contemporaries as they struggled to comprehend an act of inscrutable evil, this book brings to life a key episode in the history of the German Enlightenment — an episode in which the Enlightenment was forced to interrogate the very limits of reason itself.


Twentieth-century horrors have familiarized us with the type of evil that so shocked the men and women of the eighteenth century. Does this familiarity give us any special insight into the affair of the poisoned chalice? In its final chapter, the book takes up this question, reflecting on the nature of historical knowledge through an imaginary dialogue with Enlightenment-era interlocutors. But it does not reach any definitive conclusion about what happened in the Zurich cathedral in 1776. To search for the truth about such a mystery is merely to extend a dialogue begun in the eighteenth century, and that dialogue is as open-ended as the process of Enlightenment itself.

Jeffrey Freedman is Professor of European History at Yeshiva University.

"Freedman weaves together an erudite cultural history with obvious implications for our own age of commonplace random violence."—Publishers Weekly

"Freedman branches out into the world of ideas, persuasively connecting the debate about the poisoned wine to rationalism to rationalism and the problem of evil, the relationship between Enlightenment and religion, and the interpretation of historical evidence itself. Along the way, however, he never loses grip of a strong narrative thread featuring sinister happenings [and] political intrigue. A Poisoned Chalice is the real thing an elegantly organized and impressively readable book by a talented historian."—Christopher Tayler, The Sunday Telegraph

"Freedman's detective work takes the reader on an extraordinary journey. He moves with great elegance and skill from the politics of Zurich to the wider world of the German Enlightenment: his book is a tour de force."—Joachim Whaley, Times Literary Supplement

"Mr. Freedman is a historian who has a lively, thought-provoking style, and who is not afraid to risk a judgement. . . . [He] has a real passion for the important issues at stake here."—Nigel Williams, Daily Telegraph

"This book is an insightful work of microhistory that should rank with Carlo Ginzburg's The Cheese and the Worms and Natalie Zemon Davis's The Return of Martin Guerre."—Robert Anchor, American Historical Review

"In addition to exploiting a good mystery's appeal to readers . . . Freedman crafts his story to address serious intellectual issues.... The book that results is both entertaining and intellectually stimulating—imagine, if you will, a Name of the Rose based on real sources."—Randolph C. Head, Central European History

"The story itself is a rollicking good one, filled with colorful characters. . . . The author's breezy prose keeps the story rolling along and his narrative choices preserve the mystery of a good whodunit. . . . Freedman's bold interpretation of the Enlightenment and his successful repositioning of arguments about radical evil to the center of debate are breathtaking achievements. They are also, in their implication, profoundly disturbing."—Mary Lindeman, Journal of Modern History

"Elegantly written and a delight to read, this book is certainly an example of microhistory at its best. It brings to life a strange, long-neglected incident in the history of Zurich and uses it to analyze the relationship between religion and the Enlightenment in the late eighteenth century."—Carlos Eire, Yale University

"This book has a significant role to play in introducing students and the interested public to the nature of the Enlightenment in German-speaking Europe and the new role played by publishing in the shaping of public opinion in late eighteenth century Europe. It is written in an informal style that, along with its brevity and drama, make the text highly readable."—David Kertzer, Brown University

"Jeffrey Freedman's elegant and erudite book works on several levels. A fascinating detective story about strange doings in Zurich in 1776, it follows the ripples caused by the affair of the poisoned chalice into the city where it took place, the media that made it a cause célèbre, and the highest circles of the German-speaking Enlightenment. This is a small masterpiece: the distilled essence of cultural history, brilliantly analyzed and presented."—Anthony Grafton, Princeton University, author of Cardano's Cosmos and The Footnote

"A Poisoned Chalice is a wicked blend of erudition and entertainment. Jeffrey Freedman's engrossing study of the legal and literary furor surrounding the apparent poisoning of the communion wine in eighteenth-century Zurich serves up a compelling account of crime, punishment, and publicity in the Age of Enlightenment. Following Freedman as he works his way skillfully from court records to scientific reports to literary journals, we learn how the police investigated and the press debated a crime that fascinated German-speaking Europe. Here's a story that has everything: religious skullduggery, social tensions, crusading publicists, and a colorful cast of characters. A Poisoned Chalice is heady stuff indeed."—James Schmidt, Boston University