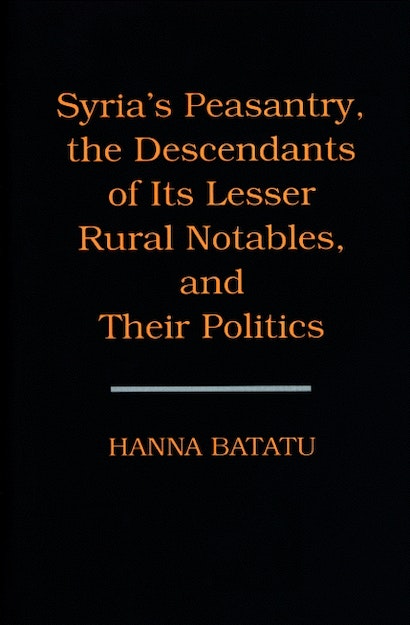 In this book, the distinguished scholar Hanna Batatu presents a comprehensive analysis of the recent social, economic, and political evolution of Syria’s peasantry, the segment of society from which the current holders of political power stem. Batatu focuses mainly on the twentieth century and, in particular, on the Ba`th movement, the structures of power after the military coup d’état of 1963, and the era of îvfiz al-Asad, Syria’s first ruler of peasant extraction. Without seeking to prove any single theory about Syrian life, he offers a uniquely rich and detailed account of how power was transferred from one demographic group to another and how that power is maintained today.


Batatu begins by examining social differences among Syria’s peasants and the evolution of their mode of life and economic circumstances. He then scrutinizes the peasants’ forms of consciousness, organization, and behavior in Ottoman and Mandate times and prior to the Ba`thists’ rise to power. He explores the rural aspects of Ba`thism and shows that it was not a single force but a plurality of interrelated groups — prominent among them the descendants of the lesser rural notables — with different social goals and mental horizons. The book also provides a perceptive account of President Asad, his personality and conduct, and the characteristics and power structures of his regime. Batatu draws throughout on a wide range of socioeconomic and biographical information and on personal interviews with Syrian peasants and political leaders, offering invaluable insights into the complexities of a country and a regime that have long been poorly understood by outsiders.

Hanna Batatu is Professor of Contemporary Arab Studies Emeritus at Georgetown University. In addition to his contributions to many books and scholarly journals, he is the author of the landmark work The Old Social Classes and the Revolutionary Movements of Iraq (Princeton).

"Batatu's thoroughly researched, objective study provides a sociological and anthropological approach to contemporary Syrian politics and is an excellent source of information on various and often conflicting components of Syrian society."—Choice

"This is a richly textured study. . . . The book is full of interesting and novel ways of understanding Syrian peasant behavior and why peasants cannot be discussed as a single socioeconomic or political force or group."—Philip S. Khoury, Massachusetts Institute of Technology

"This is a profound and comprehensive study of modern Syria that is unlikely to be surpassed for a very long time. It is a model of how social history should be written, and of how it can be used to explain the politics of a complex society like Syria."—Rashid Khalidi, University of Chicago