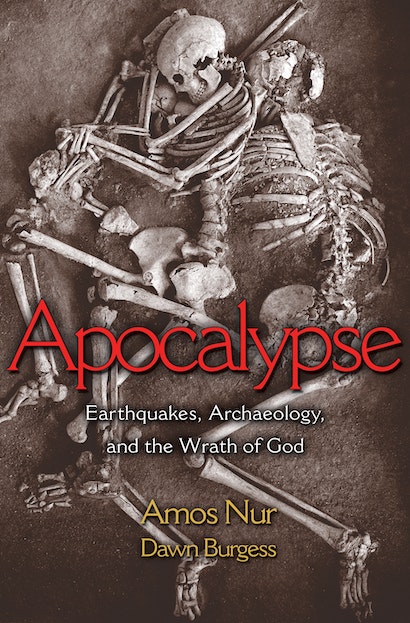 What if Troy was not destroyed in the epic battle immortalized by Homer? What if many legendary cities of the ancient world did not meet their ends through war and conquest as archaeologists and historians believe, but in fact were laid waste by a force of nature so catastrophic that religions and legends describe it as the wrath of god? Apocalypse brings the latest scientific evidence to bear on biblical accounts, mythology, and the archaeological record to explore how ancient and modern earthquakes have shaped history — and, for some civilizations, seemingly heralded the end of the world.


Archaeologists are trained to seek human causes behind the ruins they study. Because of this, the subtle clues that indicate earthquake damage are often overlooked or even ignored. Amos Nur bridges the gap that for too long has separated archaeology and seismology. He examines tantalizing evidence of earthquakes at some of the world’s most famous archaeological sites in the Mediterranean and elsewhere, including Troy, Jericho, Knossos, Mycenae, Armageddon, Teotihuacán, and Petra. He reveals what the Bible, the Iliad, and other writings can tell us about the seismic calamities that may have rocked the ancient world. He even explores how earthquakes may have helped preserve the Dead Sea Scrolls. As Nur shows, recognizing earthquake damage in the shifted foundations and toppled arches of historic ruins is vital today because the scientific record of world earthquake risks is still incomplete. Apocalypse explains where and why ancient earthquakes struck — and could strike again.

Amos Nur is the Wayne Loel Professor of Earth Sciences and professor of geophysics at Stanford University. Dawn Burgess is a writer and editor based in Bar Harbor, Maine. She earned a PhD in geophysics from Stanford.

"[Amos Nur] posits seismicity—rather than invaders or social forces—as the prime dynamic behind the fall of ancient civilizations. Nur engages in what we might call archaeological detective work—looking at the positions of human remains, for instance, to determine cause of death—his book is focused and intense."—David Ulin, Los Angeles Times Book Review

"[A] deeply researched and compellingly written book. Apocalypse is a winning combination of cautious interdisciplinary investigation and interpretation, writing suitable for a general readership, and excellent illustrations. Although it will deliberately irritate many archaeologists, it should also provoke a serious reconsideration of the archaeological record. [T]he evidence for earthquakes in prehistorical change may be staring archaeologists in the face."—Andrew Robinson, Nature

"The theory that earthquakes may have caused the destruction of many ancient cities is unpopular and controversial. Amos Nur's book illustrated these ideas with convincing prose and meticulous research. Nur introduces the reader to a relatively new science...called Archaeoseismology. The reader will dosciver that the earthquakes that have occurred in the more recent times...have parallels to the remnants of destruction left from earthquakes in the distant past. Apocalypse is a result of [Nur's] determined effort to expell the fallacies in archaeology with the hard science of geophysics."—Lee Gooden, ForeWord Magazine

"In Apocalypse...Amos Nur compellingly proposes seismic sources for civilizational collapses that the Bible and the Classics attribute to other causes."—Anneli Rufus, East Bay Express

"[Amos Nur] delivers a fascinating mini-course full of detail, speculation and a challenge to previous archaeological interpretations. Nur examines the record of earthquakes in the seismically active 'Holy Land.' [R]eaders, regardless of religious persuasion, will appreciate the connections between geological and archaeological evidence and sections of the Bible. Both believers and athiests will enjoy pondering Nur's discussions of material from the Bible and the Dead Sea Scrolls."—Fred Bortz, Seattle Times

"In Apocalypse, Nur argues that historical earthquake events explain most of the destruction of several well-known Near East settlements. . . . This volume makes a fine—albeit controversial—contribution to traditional perspectives."—M. Evans, Choice

"Nur's book provides a clear, fast-reading, yet cautious and measured account of what archaeologists truly need to know about the geology and physics of earthquakes. . . . The text is liberally sprinkled with prime examples from both the Old and New Worlds. If you work in a seismic area, you owe it to yourself to curl up with this gem."—E.W. Barber, American Journal of Archaeology

"[T]he writing is very approachable, and the book is accessible to a broader audience, including geophysicists and the general public. I found it an enjoyable read and was interested to learn about this intersection of geophysics and archeology and also to be reminded of details from long-forgotten ancient history classes."—Seth S. Haines, Leading Edge

"Recognizing earthquake damage in the shifted foundations and toppled arches of historic ruins is vital today because the scientific record of world earthquake risks is still incomplete. Apocalypse explains where and why ancient earthquakes struck and could strike again."—MCEER Information Service

"No doubt, seldom could any book be so provoking in discussions on geophysical contributions to societal collapse in ancient times as Apocalypse is."—Marek Lewandowski, Pure and Applied Geophysics

"Having read this book with interest it is clear that there is far more evidence for earthquake activity in the archaeological record than we currently acknowledge and that archaeologists need to treat the phenomenon with greater regard. The book is well written and highly accessible and the partnership of Nur and Burgess has clearly worked to the benefit of the reader."—John Grattan, Journal of Archaeological Science

"Does this study, which chronicles the history and archaeology of ancient and modern earthquakes in both the Near East and the eastern Mediterranean region, warrant the attention of scholars and interested laymen? Absolutely!"—William S. Arnett, Historian

"An artful and rare combination of deep insight, fascinating evidence, and careful scholarship. This book will be a pleasure for anyone interested in human history and how the physical world works, and a must-have for archaeologists. No other book gives such a brilliant and thorough analysis of what an archaeologist should know about geology. We were delighted with this book and with how much we enjoyed and learned from it."—Elizabeth Wayland Barber and Paul T. Barber, authors of When They Severed Earth from Sky

"Guided by impeccable science and clues in earth-shaking myths from Bronze Age Troy to ancient Mexico, Nur uncovers rich archaeological and legendary evidence for devastating earthquakes and their impacts on history and civilization. Nur's original study not only measures the cultural aftershocks of seismic catastrophes in antiquity, but presents compelling implications for the future."—Adrienne Mayor, Stanford University

"A well-written, timely, and thought-provoking story. The book is an eye-opener, especially for many archaeologists and classicists who have rarely considered the far-reaching impacts of destructive natural events in their reconstructions of ancient societies. It is controversial, which is exactly what is needed to generate more discussions and cooperation between archaeologists and geologists."—Jelle Zeilinga de Boer, coauthor of Earthquakes in Human History

"Engaging and personal. I thoroughly enjoyed this book."—Christopher Scholz, author of Fieldwork: A Geologist's Memoir of the Kalahari