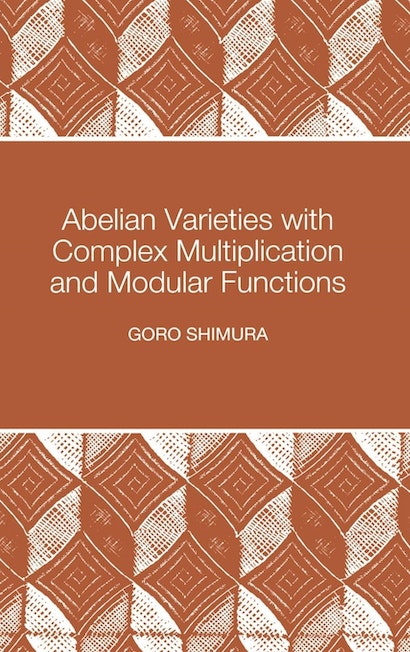 Reciprocity laws of various kinds play a central role in number theory. In the easiest case, one obtains a transparent formulation by means of roots of unity, which are special values of exponential functions. A similar theory can be developed for special values of elliptic or elliptic modular functions, and is called complex multiplication of such functions. In 1900 Hilbert proposed the generalization of these as the twelfth of his famous problems. In this book, Goro Shimura provides the most comprehensive generalizations of this type by stating several reciprocity laws in terms of abelian varieties, theta functions, and modular functions of several variables, including Siegel modular functions.


This subject is closely connected with the zeta function of an abelian variety, which is also covered as a main theme in the book. The third topic explored by Shimura is the various algebraic relations among the periods of abelian integrals. The investigation of such algebraicity is relatively new, but has attracted the interest of increasingly many researchers. Many of the topics discussed in this book have not been covered before. In particular, this is the first book in which the topics of various algebraic relations among the periods of abelian integrals, as well as the special values of theta and Siegel modular functions, are treated extensively.

Goro Shimura is Professor of Mathematics at Princeton University. He was awarded the Leroy P. Steele Prize in 1996 for lifetime achievement in mathematics by the American Mathematical Society. He is the author of Introduction to Arithmetic Theory of Automorphic Functions (Princeton).

"[This book] is a beautifully written, self-contained and complete treatment of a subject of which G. Shimura is a founding master, and is a fundamental reference for any researcher or student of the antimetric theory of abelian varieties and modular functions, and in particular of its applications to class field theory."—Bulletin of the London Mathematical Society