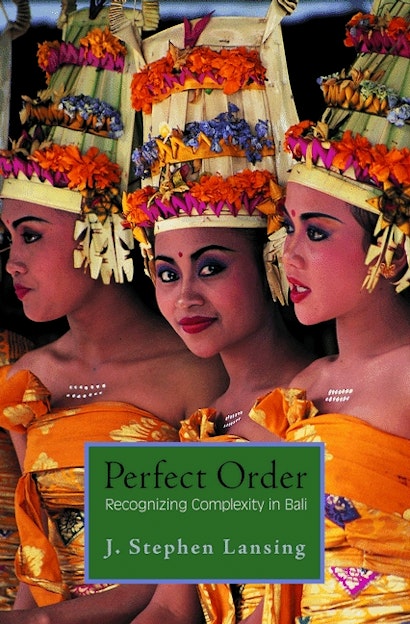 Along rivers in Bali, small groups of farmers meet regularly in water temples to manage their irrigation systems. They have done so for a thousand years. Over the centuries, water temple networks have expanded to manage the ecology of rice terraces at the scale of whole watersheds. Although each group focuses on its own problems, a global solution nonetheless emerges that optimizes irrigation flows for everyone. Did someone have to design Bali’s water temple networks, or could they have emerged from a self-organizing process?

Perfect Order — a groundbreaking work at the nexus of conservation, complexity theory, and anthropology — describes a series of fieldwork projects triggered by this question, ranging from the archaeology of the water temples to their ecological functions and their place in Balinese cosmology. Stephen Lansing shows that the temple networks are fragile, vulnerable to the cross-currents produced by competition among male descent groups. But the feminine rites of water temples mirror the farmers’ awareness that when they act in unison, small miracles of order occur regularly, as the jewel-like perfection of the rice terraces produces general prosperity. Much of this is barely visible from within the horizons of Western social theory.


The fruit of a decade of multidisciplinary research, this absorbing book shows that even as researchers probe the foundations of cooperation in the water temple networks, the very existence of the traditional farming techniques they represent is threatened by large-scale development projects.

J. Stephen Lansing is professor of anthropology at the University of Arizona, external professor at the Santa Fe Institute, and senior research fellow at the Stockholm Resilience Centre. He is the author of Priests and Programmers and The Balinese, and writer and codirector of documentary films such as Three Worlds of Bali and The Goddess and the Computer.

"I would recommend . . . this book . . . as perhaps providing an example of social and ecological self-organization which might be useful in modeling other systems, whether in the social or ecological field or even in other fields in which complex adaptive systems may be studied."—Phillip Guddemi, Cybernetics & Human Knowing

"A master story teller, Stephen Lansing is unique in his ability to explain order in human societies within the framework of complex systems theory. Through the lens of his Balinese study system, hierarchical organization, equality, and self-organization all become clearer. There are lessons in this book for understanding diverse societies, including our own."—Simon A. Levin, Princeton University, author of Fragile Dominion

"The extraordinary complexity of Balinese social life, the grand variousness of its culture, and the clockwork precision of its terraced wet rice agriculture climbing up the sides of towering volcanoes have long astonished scholars, administrators, and tourists alike. In this brilliant synthesis, the anthropologist-cum-ecologist J. Stephen Lansing uncovers the principles which animate them and traces the ways in which they support and govern one another to produce a tremulous and troubled self-organizing, self-repairing whole. The collective management of irrigation, the endemic factionalism of village life, the fears and suspicions of the witches' and demons' spirit world, and the ritualized hierarchy of precedence and power are seen as conducing to a complicated common order precariously maintained. The result is something we have not had before—a comprehensive and circumstantial study of Bali as a whole. A major achievement."—Clifford Geertz, Institute for Advanced Study

"Perfect Order is an exceptional work—a new classic in the anthropology of religion, the environment, and society. It will provoke considerable debate in the field—all, I feel, for the better."—Robert W. Hefner, Boston University, author of Civil Islam: Muslims and Democratization in Indonesia

"This wonderful book weaves together two fields that rarely come close to each other—complex adaptive systems and anthropology. In showing how the two can both give insights into one human-environment system, Lansing also reminds us that complex adaptive systems are not just computer abstractions, but have real-world significance; and that human cultures, while rich in their own right, follow certain dominant patterns and rules, with lessons for the evolution of human societies and cultures today."—Ann P. Kinzig, Arizona State University