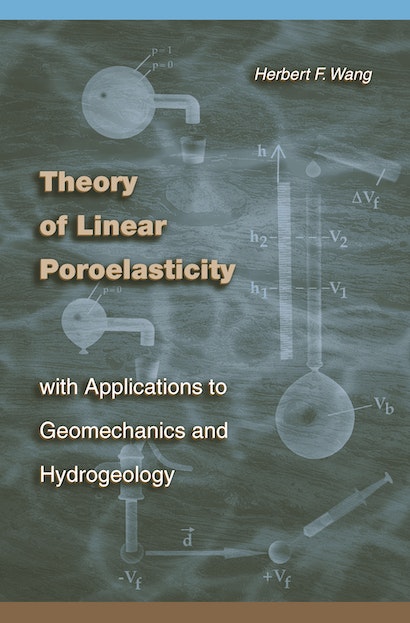 The theory of linear poroelasticity describes the interaction between mechanical effects and adding or removing fluid from rock. It is critical to the study of such geological phenomena as earthquakes and landslides and is important for numerous engineering projects, including dams, groundwater withdrawal, and petroleum extraction. Now an advanced text synthesizes in one place, with one notation, numerous classical solutions and applications of this highly useful theory.


The introductory chapter recounts parallel developments in geomechanics, hydrogeology, and reservoir engineering that are unified by the tenets of poroelasticity. Next, the theory’s constitutive and governing equations and their associated material parameters are described. These equations are then specialized for different simplifying geometries: unbounded problem domains, uniaxial strain, plane strain, radial symmetry, and axisymmetry. Example problems from geomechanics, hydrogeology, and petroleum engineering are incorporated throughout to illustrate poroelastic behavior and solution methods for a wide variety of real-world scenarios. The final chapter provides outlines for finite-element and boundary-element formulations of the field’s governing equations. Whether read as a course of study or consulted as a reference by researchers and professionals, this volume’s user-friendly presentation makes accessible one of geophysics’ most important subjects and will do much to reduce poroelasticity’s reputation as difficult to master.

Herbert F. Wang is Professor of Geophysics at the University of Wisconsin-Madison and coauthor of Introduction to Groundwater Modeling: Finite Difference and Finite Element Methods. His research interests have included the poroelastic properties of rocks, the poroelastic theory of fractured rocks, and the poroelastic modeling of ground deformations following earthquakes.

"This book is essential reading for those students who are serious about geomechanics."—Terry Engelder, Journal of Geoscience Education

"This book is a significant contribution to the poroelasticity field and one which might well become a classic. It is an invaluable resource for hydrogeologists and geotechnical and petroleum engineers. It can also be easily adopted as a graduate-level texbook. The scholarship is sound. The content is effectively organized and well written. I strongly recommend it."—Shemin Ge, University of Colorado, Boulder