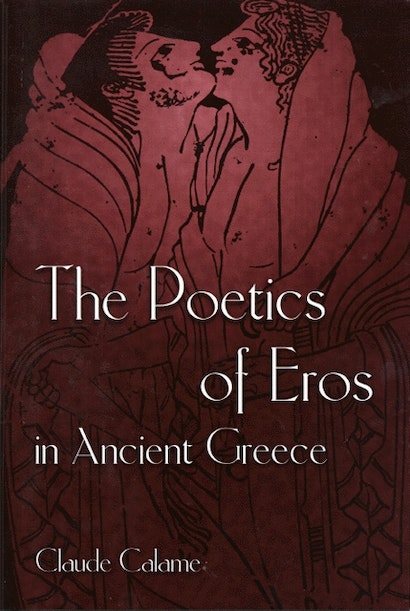 The Poetics of Eros in Ancient Greece offers the first comprehensive inquiry into the deity of sexual love, a power that permeated daily Greek life. Avoiding Foucault’s philosophical paradigm of dominance/submission, Claude Calame uses an anthropological and linguistic approach to re-create indigenous categories of erotic love. He maintains that Eros, the joyful companion of Aphrodite, was a divine figure around which poets constructed a physiology of desire that functioned in specific ways within a network of social relations. Calame begins by showing how poetry and iconography gave a rich variety of expression to the concept of Eros, then delivers a history of the deity’s roles within social and political institutions, and concludes with a discussion of an Eros-centered metaphysics.


Calame’s treatment of archaic and classical Greek institutions reveals Eros at work in initiation rites and celebrations, educational practices, the Dionysiac theater of tragedy and comedy, and in real and imagined spatial settings. For men, Eros functioned particularly in the symposium and the gymnasium, places where men and boys interacted and where future citizens were educated. The household was the setting where girls, brides, and adult wives learned their erotic roles — as such it provides the context for understanding female rites of passage and the problematics of sexuality in conjugal relations. Through analyses of both Greek language and practices, Calame offers a fresh, subtle reading of relations between individuals as well as a quick-paced and fascinating overview of Eros in Greek society at large.

Claude Calame is Professor of Greek Language and Literature at the University of Lausanne in Switzerland. He is the author of several works translated into English, including Choruses of Young Women in Ancient Greece and The Craft of Poetic Speech in Ancient Greece. This current book, The Poetics of Eros in Ancient Greece, was originally published in Italian translation.