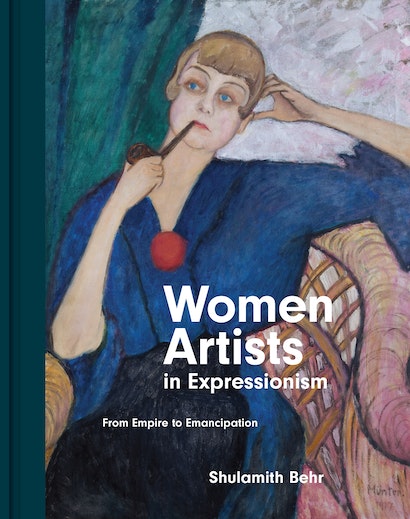 Women Artists in Expressionism explores how women negotiated the competitive world of modern art during the late Wilhelmine and early Weimar periods in Germany. Their stories challenge predominantly male-oriented narratives of Expressionism and shed light on the divergent artistic responses of women to the dramatic events of the early twentieth century.

Shulamith Behr shows how the posthumous critical reception of Paula Modersohn-Becker cast her as a prime agent of the feminization of the movement, and how Käthe Kollwitz used printmaking as a vehicle for technical innovation and sociopolitical commentary. She looks at the dynamic relationship between Marianne Werefkin and Gabriele Münter, whose different paths in life led them to the Blaue Reiter, a group of Expressionist artists that included Wassily Kandinsky and Paul Klee. Behr examines Nell Walden’s role as an influential art dealer, collector, and artist, who promoted women Expressionists during the First World War, and discusses how Dutch artist Jacoba van Heemskerck’s spiritual abstraction earned her the status of an honorary German Expressionist. She demonstrates how figures such as Rosa Schapire and Johanna Ey contributed to the development of the movement as spectators, critics, and collectors of male avant-gardism.

Richly illustrated, Women Artists in Expressionism is a women-centered history that reveals the importance of emancipative ideals to the shaping of modernity and the avant-garde.

Shulamith Behr is honorary research fellow at the Courtauld Institute of Art, University of London. She is the author of Expressionism, Conrad Felixmüller, 1897–1977: Works on Paper, and Women Expressionists and the coeditor of Arts in Exile in Britain 1933–1945: Politics and Cultural Identity.

“Behr draws on primary literature of the period to paint a clearer image of how women Expressionist artists were regarded during their lifetimes, illustrating the uniqueness of their struggles and strong contributions to a movement that has, until now, been viewed through the historical lens of masculinity.”—Nathan J. Timpano, author of Constructing the Viennese Modern Body: Art, Hysteria, and the Puppet