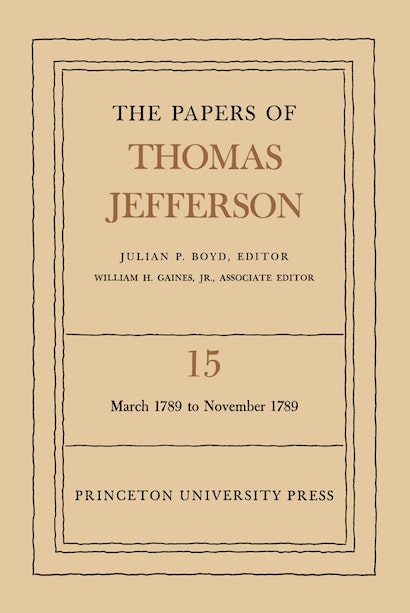 In Volume 15 Jefferson, a veteran of the councils of his own country’s revolution, becomes an eyewitness of the opening events of the great upheaval in France in 1789.


The Archbishop of Bordeaux and his colleagues of the National Assembly ask Jefferson’s aid and counsel in drafting a new constitution; he declines in July but gives a private dinner in August for Lafayette and the moderates who wish to form a coalition and thus avoid civil war. He is catapulted into the limelight by Mirabeau’s attack on Necker for the shortage of grain and flour. He advises Lafayette about the latter’s proposed draft of a Declaration of Rights and proposes a compromise charter for France in order to gain time, to consolidate the advances already made, and to allow public opinion to ripen.


Jefferson dines with De Corny and learns at first hand what happened at the fall of the Bastille. Three days later he is among the crowds with Dugald Stewart, the young Scottish philosopher, as Louis XVI is “led in triumph by his people thro’ the streets of the capital.” He writes long dispatches to Jay and private letters to Thomas Paine and Richard Price, among others, detailing the events that he regarded as “the first chapter of the history of European liberty.”


Early in September Jefferson becomes ill and, treated by a philosopher-physician, is possessed by the idea that “the earth belongs in usufruct to the living.” He urges Madison to develop this concept and to apply it to American legislation — but his ostensible purpose is supported by arguments addressed wholly to the situation in France, whereby he furnishes justification for the abolition of ancient debts, the public appropriation of feudal grants, the wiping out of hereditary privileges, and the eradication of monopolies.


Late in September, with Polly, Patsy, Petit, and two servants, Jefferson leaves Paris for a six months’ leave, unaware that the same day the United States Senate confirmed his nomination as Secretary of State. Four weeks later he lands in Norfolk, where he is greeted by the officials — and finds that politics and anti-federalism are far from inactive in Virginia.