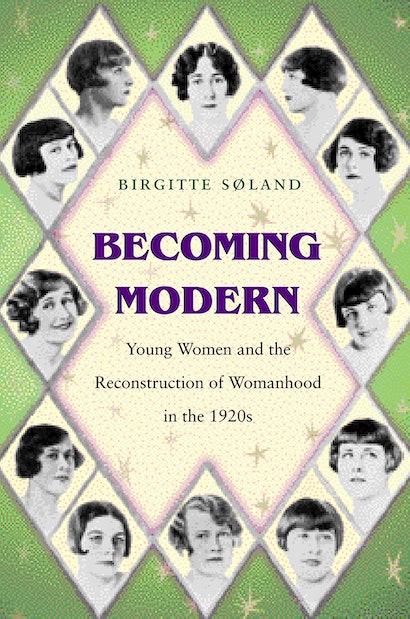 In the decade following World War I, nineteenth-century womanhood came under attack not only from feminists but also from innumerable “ordinary” young women determined to create “modern” lives for themselves. These young women cut their hair, wore short skirts, worked for wages, sought entertainment outside the home, and developed new attitudes toward domesticity, sexuality, and their bodies. Historians have generally located the origins of this shift in women’s lives in the upheavals of World War I. Birgitte Søland’s exquisite social and cultural history suggests, however, that they are to be found not in the war itself, but in much broader social and economic changes.

Søland’s engrossing chronicle draws on a rich variety of sources — including popular media and medical works as well as archival records and oral histories — to examine how notions of femininity and womanhood were reshaped in Denmark, a small, largely agrarian country that remained neutral during the war. It explores changes in the female body and personality, the forays of young women into the public sphere, the redefinition of female respectability, and new understandings of married life as evidenced in both cultural discourses and social practices. Though specific in its focus, the book raises broad comparative questions as it challenges common assumptions about the social and sexual upheavals that characterized the Western world in the postwar decade. In a remarkably engaging fashion, it shows why the end of World War I did not lead to the return of “normal” life in the 1920s.

Birgitte Søland is Assistant Professor of History at Ohio State University and coeditor of Gender, Kinship, Power: A Comparative and Interdisciplinary History.

"In this short, clearly written book, Birgitte Søland examines how Danish women who came of age in the 1920s reshaped their female identities and gender relations so that they might lead what they regarded as 'modern' lives. . . . Soland has produced an excellent account of [these] new lifestyles created by young Danish women in the 1920s."—Doris H. Linder, American Historical Review

"Birgitte Søland addresses longstanding questions in the history of women and gender in the industrialized world: What was 'modernity,' and how did it change the practice of everyday life? Søland spells out her answers through the words of Danish women who forged new styles and new ideals that challenged tradition without overthrowing the hierarchies of gender. The book is carefully researched, clearly argued, and crisply written."—Joanne Meyerowitz, Indiana University

"Becoming Modern is a most impressive exploration of the large issues of modernity, consumer culture, leisure, the body, and sexuality in the context of a small country. Birgitte Søland deftly reconstructs the revolt of women coming of age in 1920s Denmark. Refusing to privilege either cultural discourse or social experience, Søland's richly textured analysis explores the complex ways in which discourse constructed the modern girl/woman and young women, in turn, shaped debates around gender. Becoming Modern is both essential and enjoyable reading for anyone interested in gender and modernity."—Mary Nolan, New York University

"This unique study of women in twentieth-century Denmark contributes to the field of women's history-and the specific area of gender and modernity-in multiple ways. It examines the process of modernization throughout women's life cycle, focusing on both young single and older married women. As one of the few full-length English-language historical studies of Scandinavian women, it is essential to the current project of women's history, which is becoming increasingly internationalized and comparative."—Sonya A. Michel, author of Children's Interests / Mother's Rights: The Shaping of America's Child Care Policy

"This is a significant contribution to European, social, gender, and cultural history because it chronicles the modernity of everyday life and challenges the dominant interpretations of interwar struggles over gender as grounded in the experience of war. The case of Denmark makes debate of these theories high on the historical agenda. And because the story is told in such a lively and clear manner, the book will have wider appeal than the case of Denmark might suggest. Scholars in a number of fields who puzzle over modernity will find this a useful, accessible treatment of social and cultural modernity. The book is terrific to read, a real pleasure."—Bonnie Smith, author of The Gender of History: Men, Women, and Historical Practice