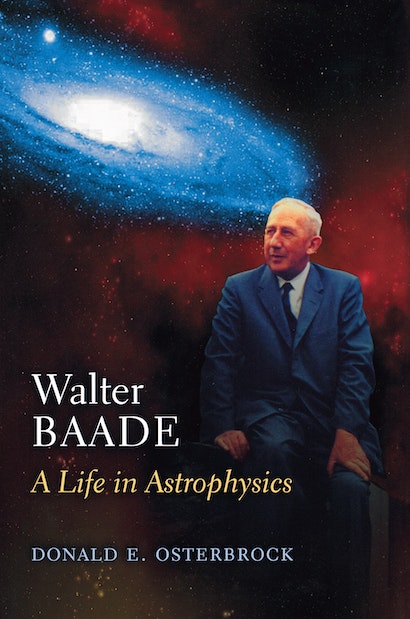 Although less well known outside the field than Edwin Hubble, Walter Baade was arguably the most influential observational astronomer of the twentieth century. Written by a fellow astronomer deeply familiar with Baade and his work, this is the first biography of this major figure in American astronomy. In it, Donald Osterbrock suggests that Baade’s greatest contribution to astrophysics was not, as is often contended, his revision of Hubble’s distance and age scales for the universe. Rather, it was his discovery of two distinct stellar populations: old and young stars. This discovery opened wide the previously marginal fields of stellar and galactic evolution — research areas that would be among the most fertile and exciting in all of astrophysics for decades to come.


Baade was born, educated, and gained his early research experience in Germany. He came to the United States in 1931 as a staff member of Mount Wilson Observatory, which housed the world’s largest telescope. There, he pioneered research on supernovae. With the 100-inch telescope, he studied globular clusters and the structure of the Milky Way, every step leading him closer to the population concept he discovered during the wartime years, when the skies of southern California were briefly darkened. Most Mount Wilson astronomers were working on weapons-development crash programs devoted to bringing Baade’s native country to its knees, while he, formally an enemy alien in their midst, was confined to Los Angeles County but had almost unlimited use of the most powerful telescope in the world.


After his great discovery, Baade continued his research with the new 200-inch telescope at Palomar. Always respected and well liked, he became even more famous among astronomers as they shifted their research to the fields he had opened. Publicity-shy and seemingly unconcerned with publication, however, Baade’s celebrity remained largely within the field. This accomplished biography at last introduces Baade — and his important work — to a wider public, including the newest generation of skywatchers.

Donald E. Osterbrock is Professor Emeritus of Astronomy and Astrophysics at the University of California, Santa Cruz and former Director of the Lick Observatory. He is the author or coauthor of Yerkes Observatory, 1892-1950: The Birth, Near Death, and Resurrection of a Scientific Research Institution; Pauper & Prince: Ritchey, Hale, & Big American Telescopes; Astrophysics of Gaseous Nebulae and Active Galactic Nuclei; and Eye on the Sky: Lick Observatory's First Century. He coedited Origins and Extinctions.

"Walter Baade was one of the key players in mid-20th Century astrophysics and this biography by Donald Osterbrock is welcome and timely. . . . His story is a fascinating one, well told and nicely illustrated with contemporary photographs."—David Strickland, The Observatory

"Baade was arguably the most influential observational astronomer of the 20th century. . . . Donald Osterbrock . . . meticulously documents Baade's life and work, with references to correspondence from more than 20 archives. . . . He has focused on hitherto unknown or overlooked facts, shown why they are important, and created a new understanding. This is the essence of good history."—Norriss S. Hetherington, Physics Today

"A well-written and meticulously researched biography. . . . It paints a picture of an innovative, hard working scientist who spent his whole life at the forefront of astronomical observation."—John Masters, Astronomy & Space

"Osterbrock's narrative and the arguments that pervade it advance an original interpretation of one of the twentieth century's most significant astronomers. Based on extensive research in the archives, this biography of Walter Baade is an impressive contribution to the history of astronom."—Karl Hufbauer, author of Exploring the Sun