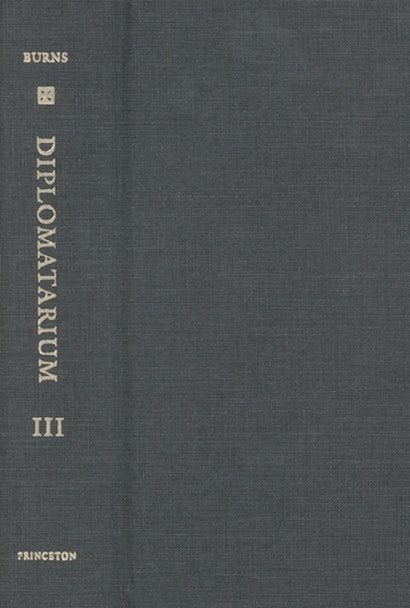 In this volume, a panoramic history of medieval Valencia continues to unfold, as the noted scholar Robert Burns presents a new set of documents from the registers of Jaume the Conqueror at the Crown Archives in Barcelona. Here Burns focuses on 500 government charters covering the years 1264 to 1270, the culmination of the king’s warrior fame in Christendom, and places these documents within the context of Jaumes’s pan-Mediterranean military and political exploits. The most impressive archives of its kind outside the papal series, this collection is invaluable to medievalists as well as to historians interested in topics ranging from colonialism to rhetoric to economics during the Crusade period. Together the five Diplomatarium volumes will reconstruct the thousands of charters describing the daily business of Jaumes’s kingdom and will provide detailed paraphrases of each document to aid scholars with little or no Latin.


The third volume describes Jaume distributing public baths and taverns and artisans’ quarters, constructing irrigation networks and castles, licensing butchers and physicians, noticing even dovecotes and beehives and oranges, operating on credit and on charismatic itinerant presence, interacting with his many Jewish and Muslim communities, and leading his armies to battle. Meanwhile, Jaumes’s bureaucrats are at work elaborating a Roman law framework, shaping an institutional and commercial system, and defining the kingdom’s religious identity. In a kaleidoscope of human detail, these documents open a window on an exotic past that medievalists and all historians can enjoy.

Robert I. Burns, S. J., is Professor of History at the University of California, Los Angeles and Director of the Institute of Medieval Mediterranean Spain in Playa del Rey. He is the author of numerous works, including Medieval Colonialism and Islam under the Crusaders (both Princeton), and he has won various honors, including the Medieval Academy of America's Haskins Medal (1976) and Spain's Premi Catalònia (1982), Premi Llull (1988), and Cross of St. George (1989).

"Burns transcribes the Latin text from the royal registers, a notable accomplishment in itself given the numerous paleographic and linguistic challenges of this source; in addition, he gives an English-language summary for each document. While such compendiums used to be commonplace in Spain, they are exceedingly rare in English and no one, other than Burns, has had the experience and patience to take on this source, at once both rich and difficult. Consequently, the Diplomatarium will serve well not only students of Valencian and Iberian history but also those whose broader continental interests touch upon the inner workings of medieval monarchy, the Church, and society."—James William Brodman, The Catholic Historical Review