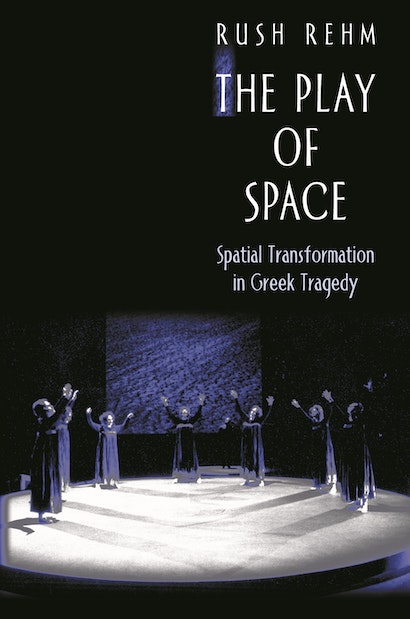 Is “space” a thing, a container, an abstraction, a metaphor, or a social construct? This much is certain: space is part and parcel of the theater, of what it is and how it works. In The Play of Space, noted classicist-director Rush Rehm offers a strikingly original approach to the spatial parameters of Greek tragedy as performed in the open-air theater of Dionysus. Emphasizing the interplay between natural place and fictional setting, between the world visible to the audience and that evoked by individual tragedies, Rehm argues for an ecology of the ancient theater, one that “nests” fifth-century theatrical space within other significant social, political, and religious spaces of Athens.


Drawing on the work of James J. Gibson, Kurt Lewin, and Michel Foucault, Rehm crosses a range of disciplines — classics, theater studies, cognitive psychology, archaeology and architectural history, cultural studies, and performance theory — to analyze the phenomenology of space and its transformations in the plays of Aeschylus, Sophocles, and Euripides. His discussion of Athenian theatrical and spatial practice challenges the contemporary view that space represents a “text” to be read, or constitutes a site of structural dualities (e.g., outside-inside, public-private, nature-culture). Chapters on specific tragedies explore the spatial dynamics of homecoming (“space for returns”); the opposed constraints of exile (“eremetic space” devoid of normal community); the power of bodies in extremis to transform their theatrical environment (“space and the body”); the portrayal of characters on the margin (“space and the other”); and the tragic interactions of space and temporality (“space, time, and memory”). An appendix surveys pre-Socratic thought on space and motion, related ideas of Plato and Aristotle, and, as pertinent, later views on space developed by Newton, Leibniz, Descartes, Kant, and Einstein. Eloquently written and with Greek texts deftly translated, this book yields rich new insights into our oldest surviving drama.

Rush Rehm is Associate Professor of Drama and Classics at Stanford University and a freelance theater director. He is the author of Marriage to Death (Princeton) and Greek Tragic Theater.

"Rehm's readings of individual scenes are frequently stimulating and original. His central intuition, that space matters in Greek tragedy, is an important corrective to the Aristotelian textual approach which has, even recently, continued to dominate readings of Greeks tragedy. The strength of Rehm's readings comes from his awareness of the multiple levels on which these plays operate. . . . He draws on a wide range of scholarship, and argues for a flexible approach, but one which pays attention above all theatrical performance, to the movement of bodies in space."—Emily Wilson, Times Literary Supplement

"A significant contribution to the field. Rush Rehm offers a most interesting 'theatre' approach to the subject while bringing into play a wide knowledge of issues relating to the dramatic texts themselves, as well as to Greek literature in general, and Greek society and history. Attractively and fluently written, this is much more than just another book on the 'staging' of Greek tragedy: it rigorously examines some fashionable ideas about Greek tragedy and offers useful corrective analyses."—John Davidson, Victoria University of Wellington, New Zealand

"Written with clarity and care, this book is theatrically insightful and sophisticated while also synthesizing an impressive range of scholarship. Its special strength lies in its ability to draw together the two branches of contemporary criticism of Greek tragedy, the text-based and the performance-based, into a balanced study that will be helpful to readers on both sides of the divide."—Justina Gregory, Smith College