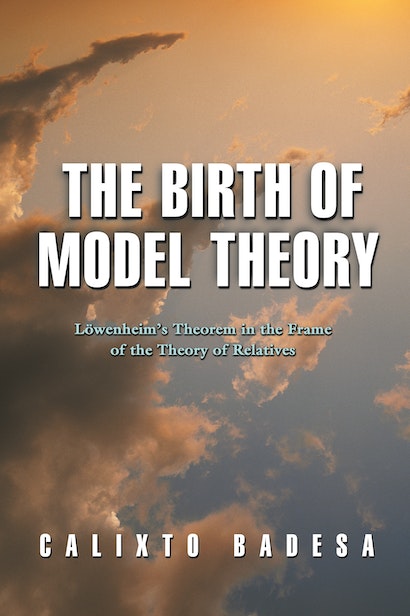 Löwenheim’s theorem reflects a critical point in the history of mathematical logic, for it marks the birth of model theory — that is, the part of logic that concerns the relationship between formal theories and their models. However, while the original proofs of other, comparably significant theorems are well understood, this is not the case with Löwenheim’s theorem. For example, the very result that scholars attribute to Löwenheim today is not the one that Skolem — a logician raised in the algebraic tradition, like Löwenheim — appears to have attributed to him. In The Birth of Model Theory, Calixto Badesa provides both the first sustained, book-length analysis of Löwenheim’s proof and a detailed description of the theoretical framework — and, in particular, of the algebraic tradition — that made the theorem possible.


Badesa’s three main conclusions amount to a completely new interpretation of the proof, one that sharply contradicts the core of modern scholarship on the topic. First, Löwenheim did not use an infinitary language to prove his theorem; second, the functional interpretation of Löwenheim’s normal form is anachronistic, and inappropriate for reconstructing the proof; and third, Löwenheim did not aim to prove the theorem’s weakest version but the stronger version Skolem attributed to him. This book will be of considerable interest to historians of logic, logicians, philosophers of logic, and philosophers of mathematics.

Calixto Badesa is Associate Professor of Logic and History of Logic at the University of Barcelona.

"A first-rate contribution to the history and philosophy of logic, this is scholarship at its best. It is, to my knowledge, the first book in the history of logic that focuses completely on a single result. Very original in approach and conception, it goes against the grain of much recent scholarship. Given the complexity of the subject, Badesa could not have done a better job of being clear and making the presentation accessible."—Paolo Mancosu, University of California, Berkeley

"The Birth of Model Theory represents a long overdue, in-depth analysis and exposition of one of the most important results in mathematical logic. There are hardly any informed, sustained treatments of Löwenheim's work to be found in the literature. This well-written book should fill this gap."—Richard Zach, University of Calgary

"This book will be extremely useful to those seeking to make sense of Löwenheim's work and those seeking to put it into its historical context. Calixto Badesa draws well-supported conclusions that contradict the entire modern body of scholarship on the topic."—Shaughan Lavine, University of Arizona