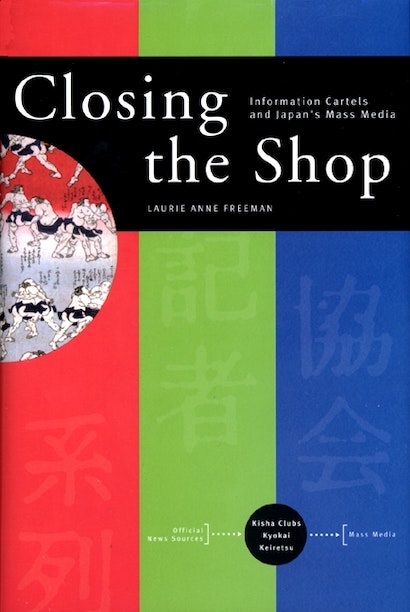 How is the relationship between the Japanese state and Japanese society mediated by the press? Does the pervasive system of press clubs, and the regulations underlying them, alter or even censor the way news is reported in Japan? Who benefits from the press club system? And who loses? Here Laurie Anne Freeman examines the subtle, highly interconnected relationship between journalists and news sources in Japan.


Beginning with a historical overview of the relationship between the press, politics, and the public, she describes how Japanese press clubs act as “information cartels,” limiting competition among news organizations and rigidly structuring relations through strict rules and sanctions. She also shows how the web of interrelations extends into, and is reinforced by, media industry associations and business groups (keiretsu). Political news and information are conveyed to the public in Japan, but because of institutional constraints, they are conveyed in a highly delimited fashion that narrows the range of societal inquiry into the political process.

Closing the Shop shows us how the press system in Japan serves as neither a watchdog nor a lapdog. Nor does the state directly control the press in ways Westerners might think of as censorship. The level of interconnectedness, through both official and unofficial channels, helps set the agenda and terms of political debate in Japan’s mass media to an extent that is unimaginable to many in the United States and other advanced industrial democracies. This fascinating look at Japan’s information cartels provides a critical but often overlooked explanation for the overall power and autonomy enjoyed by the Japanese state.

Laurie Anne Freeman is Assistant Professor of Political Science at the University of California, Santa Barbara.

"This excellent book lays bare the mechanisms of the information catels in Japan that prop up the state, insulate the elite from sustained critical oversight and rob the polity of the journalistic integrity necessary for the maintenance of democracy. Its a daunting agenda, and it is a tribute to author Laura Anne Freeman that she carries it off and in the process makes a significant contribution to our understanding of contemporary Japan."—Jeff Kingston, The Japan Times

"Closing the Shop helps explain one of the central paradoxes of Japanese politics, that the Liberal Democratic Party managed to hold onto power for four decades, despite widespread corruption. . . . Both the careful empirical study and the theory in Closing the Shop make an important contribution to our understanding of Japanese politics."—Mark Tilton, Journal of Asian Studies

"Closing the Shop is clearly written and organized, free of jargon, and accessible to readers from a range of fields. It is also a fascinating read."—Christina L. Ahmadjian, Contemporary Sociology

"An important and valuable contribution to the academic literature about Japan, Freeman's study provides the reader with a thorough analysis of the relationship between the news media and state institutions in Japan. . . . Laurie Freeman's book is a wonderful study of an important and often overlooked feature of Japanese politics. It deserves a wide readership."—Verena Blechinger, Monumenta Nipponica