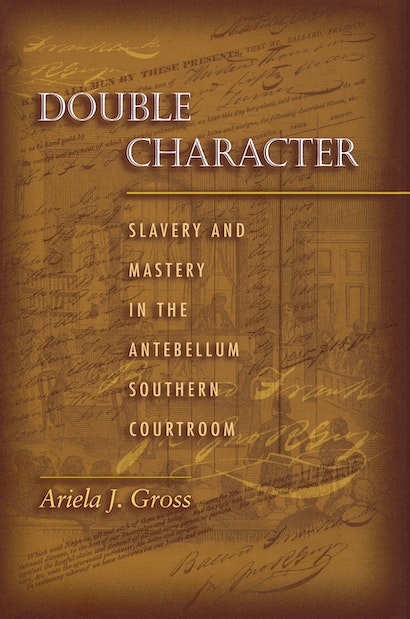 In a groundbreaking study of the day-to-day law and culture of slavery, Ariela Gross investigates the local courtrooms of the Deep South where ordinary people settled their disputes over slaves. Buyers sued sellers for breach of warranty when they considered slaves to be physically or morally defective; owners sued supervisors who whipped or neglected slaves under their care. Double Character seeks to explain how communities dealt with an important dilemma raised by these trials: how could slaves who acted as moral agents be treated as commodities? Because these cases made the character of slaves a central legal question, slaves’ moral agency intruded into the courtroom, often challenging the character of slaveholders who saw themselves as honorable masters. Gross looks at the stories about white and black character that witnesses and litigants put forth in court. She not only reveals the role of law in constructing “race” but also offers a portrait of the culture of slavery, one that addresses historical debates about law, honor, and commerce in the American South.

Gross maintains that witnesses and litigants drew on narratives available in the culture at large to explain the nature and origins of slaves’ character, such as why slaves became runaways. But the legal process also shaped their expressions of racial ideology by favoring certain explanations over others. Double Character brings to life the law as a dramatic ritual in people’s daily lives, looking at trials from the perspective of litigants, lawyers, doctors, and the slaves themselves. The author’s approach combines the methods of cultural anthropology, quantitative social history, and critical race theory.

"Double Character is an exemplar of how detailed research and theoretical sophistication can be combined. Few writers are as at home as Gross with handling both large databases and complex cultural theories."—Philip Abbott, The Historian

"Double Character is a profoundly important book. At a time when there has been much romanticization of master-slave relations, Ariela Gross dissects hundreds of antebellum legal cases in which the presumed attributes of blacks, whites, and those "in between" were litigated. What emerges is a pattern of assumptions whose power was sanctioned by law and whose legacy we battle still. A brilliant work of scholarship."—Patricia Williams, Columbia School of Law

"With great clarity, Ariela Gross's book shows how intimately the practice of law in the antebellum U.S. South was interwoven with the practice of slavery. The author conveys this tragic story in terms that provide a vivid picture of that society and also of many of the individuals involved. She has successfully melded diverse approaches toward history—legal, local, social, political, economic, and cultural—while still maintaining a powerful central focus."—Winthrop D. Jordan, University of Mississippi

"On the basis of trial records and other legal documents previously unused by historians, Ariela Gross has produced a superb study that adds enormously to our knowledge of the inner world of masters and slaves in the Old South. Effectively synthesizing the methods and data of legal and social history, she sheds new light on many themes central to antebellum history, such as the cult of honor, the function of racist and paternalist ideologies, and slave agency in the face of oppression."—George M. Fredrickson, Stanford University