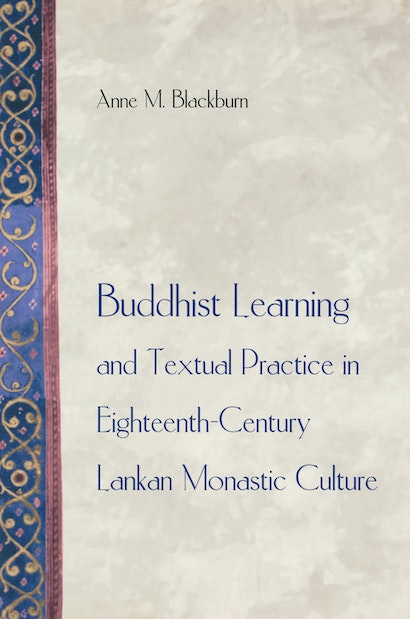 Anne Blackburn explores the emergence of a predominant Buddhist monastic culture in eighteenth-century Sri Lanka, while asking larger questions about the place of monasticism and education in the creation of religious and national traditions. Her historical analysis of the Siyam Nikaya, a monastic order responsible for innovations in Buddhist learning, challenges the conventional view that a stable and monolithic Buddhism existed in South and Southeast Asia prior to the advent of British colonialism in the nineteenth century. The rise of the Siyam Nikaya and the social reorganization that accompanied it offer important evidence of dynamic local traditions. Blackburn supports this view with fresh readings of Buddhist texts and their links to social life beyond the monastery.


Comparing eighteenth-century Sri Lankan Buddhist monastic education to medieval Christian and other contexts, the author examines such issues as bilingual commentarial practice, the relationship between clerical and “popular” religious cultures, the place of preaching in the constitution of “textual communities,” and the importance of public displays of learning to social prestige. Blackburn draws upon indigenous historical narratives, which she reads as rhetorical texts important to monastic politics and to the naturalization of particular attitudes toward kingship and monasticism. Moreover, she questions both conventional views on “traditional” Theravadin Buddhism and the “Buddhist modernism” / “Protestant Buddhism” said to characterize nineteenth-century Sri Lanka. This book provides not only a pioneering critique of post-Orientalist scholarship on South Asia, but also a resolution to the historiographic impasse created by post-Orientalist readings of South Asian history.

Anne M. Blackburn is Assistant Professor of South Asia and Director of the Sinhala Program in the Department of Asian Studies at Cornell University.

"An impressive accomplishment. . . . Blackburn's study of practices and texts associated with Buddhst education is an innovative work that recasts our understanding of religious change prior to the intensive colonization of Sri Lanka in the nineteenth century."—Stephen C. Berkwitz, The Journal of Religion

"Anne Blackburn offers a powerful new way of thinking about Buddhist monasticism in general, one that takes seriously the role of academic study in the moral economy of Buddhist monks. This strategy has broad implications for all students of the Buddhist world. Blackburn also makes an important contribution to the field by showing the richness of Sinhala Buddhist literature in one time and place and teaching us how to read a variety of genres rhetorically: we not only learn about the contents of these works but also see how they were embedded in an elaborate educational milieu. Her work will prove to be exemplary and will educate the imagination of scholars investigating other areas of Buddhist history."—Charles Hallisey, Harvard University

"This book brings forth a new and important voice in the ongoing debates about Theravada Buddhism, and it will also interest scholars outside this field. Anne Blackburn challenges, for example, many of the facile presuppositions of scholars working in colonialist and neocolonialist studies, and so makes an important contribution to the debates concerning Orientalism. Her nuanced literary critical examination of texts will make this book valuable to scholars in the field of the comparative study of religion who are just now beginning to utilize these methods to gain a greater understanding of religious texts of this kind as literary artifacts."—José Ignacio Cabezón, Iliff School of Theology