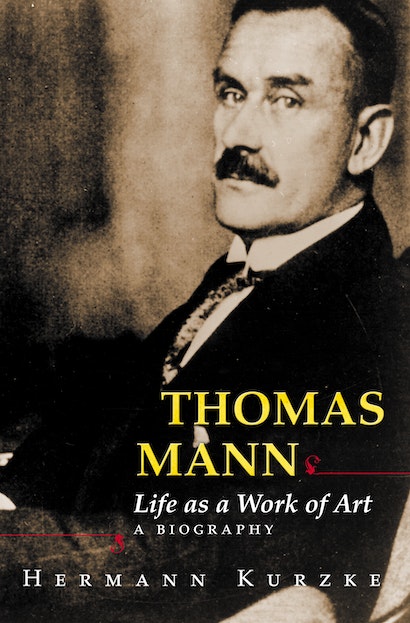 This vivid, sometimes tragic, and often humorous literary biography brings to life as never before the extraordinary talent and complex person who was Thomas Mann.


Engrossing vignettes enable us to enter Mann’s life and work from unique angles. We meet the difficult, even unsavory private man: hypochondriac and nervous, narcissistic and vainglorious, isolated and greedy for love, shy and often ungenerous. But we are also introduced to a man who lived an eventful life, was capable of great kindness, loved dogs, doted on his daughters, and listened to Jack Benny.


We experience Mann’s tragedy as the quintessential German forced by the rise of National Socialism first into inner exile and then into real exile in Switzerland, Princeton, and California. His letters from this time reveal the torment that exile represented for a writer whose work, indeed whose very self, was inextricably bound up with the German language.


The book provides fresh and sometimes startling insights into both famous and little-known episodes in Mann’s life and into his writing — the only realm in which he ever felt free. It shows how love, death, religion, and politics were not merely themes in Buddenbrooks, The Magic Mountain, and other works, but were woven into the fabric of his existence and preoccupied him unrelentingly. It also teases out what is known about what Mann considered his celibate homoeroticism and what others have labeled closeted homosexuality. In particular, we learn about his affection for the young man who inspired the character of Tadzio in Death in Venice. And, against the unfocused accusations of anti-Semitism that have been leveled at Mann, the book examines in human detail his relationships with Jewish writers, friends, and family members.


This is the richest available portrait of Thomas Mann as man and writer — the place to start for anyone wanting to know anything about his life, work, or times.

Hermann Kurzke is Professor of Literature at the University of Mainz and the author of several books. He is the editor of Thomas Mann's collected essays.

"With brilliantly erudite perspicacity, Kurzke opens before us the chasm running through Mann's life; Mann felt that his artist's alienation, his creative decadence were separated from the mainstream's wholesome middle-class robustness. . . . [Kurzke's] centerpiece is Mann's dark side, and for more than 500 pages, the book tracks the labyrinthine ways in which that darkness nourished genius."—Frederic Morton, Los Angeles Times

"A monument of good sense and sensitivity. . . . A humane account of a human being, vulnerable, obsessive, not overly likeable, and driven by an extraordinary talent, a mixture for which it is possible to feel sympathy and empathy when we are given both man and writer in this depth."—T. J. Reed, Times Literary Supplement

"[This book] may easily become the definitive biography of the great writer. Drawing deeply on letters, journals, diaries and essays, he engages in close readings of all of Mann's writings to demonstrate the ways the writer's life so intimately informs his art and the ways that his art informs his life."—Publisher's Weekly

"Have we yet gleaned from any work—with such assured elucidation—a comparably comprehensive exposition of the visceral artistic essence of the 'sorcerer's' leitmotif?"—Die Presse

"The most interesting Mann biography in a long time."—Die Woche

"An impressive and convincing portrait of Thomas Mann. . . . The best portrait."—Neue Zürcher Zeitung

"[Kurze's] is the first book destined to generate broad interest in the work of the most significant German novelist. It is a biography for the impassioned reader."—Frankfurter Allgemeine Zeitung

"Hermann Kurzke (finally!) gives the writer his due. . . . The biography as a work of art!"—Süddeutsche Zeitung

"A major achievement in literary biography."—Booklist

"[An] insightful biography. . . . Kurzke proceeds . . . by a series of mini-essays, each focused on an event or element of Mann's life. He demonstrates intelligent sympathy for his subject and a necessary awareness of the dangers of his method. For he is, in an important sense, unwriting Mann's lifework, making explicit and biographical what Mann encoded and universalized."—Adam Kirsch, American Scholar

"The most penetrating and nuanced portrait we possess of Germany's greatest 20th-century novelist as a human being. . . . The author of this compelling biography is masterly."—Eda Segarra, Irish Times

"A comprehensive, sensitive biography that takes into consideration all the new information about Mann's life that has become known in recent years. . . . This civilized, readable, erudite but never arcane study is one of the best accounts of the life of a complex man, perplexed, tortured by his sexual predilections."—Choice

"This absorbing biography of Thomas Mann . . . allows us to peek into the altogether private world of the great German writer."—Virgina Quarterly Review

"Kurzke's extensive and profound knowledge of all of Thomas Mann's writings . . . allows him to see what Thomas Mann made in literature out of the facts and personages of his life. For in Kurzke's eyes Thomas Mann did not believe in making things up. This is the basis for the biography: Mann's life directly reflects his life. . . . [T]his is a fascinating book that will provoke and inspire anyone who reads it."—Rodney Symington, Seminar