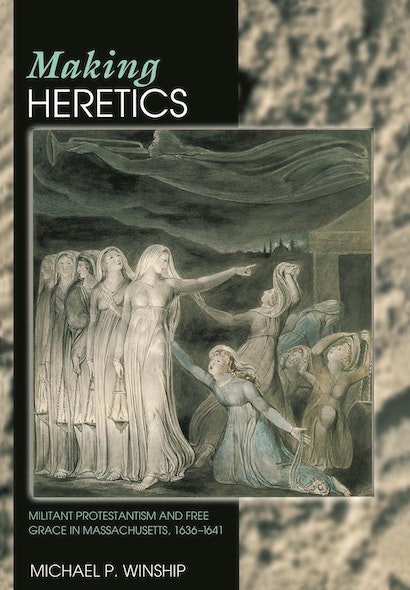 Making Heretics is a major new narrative of the famous Massachusetts disputes of the late 1630s misleadingly labeled the “antinomian controversy” by later historians. Drawing on an unprecedented range of sources, Michael Winship fundamentally recasts these interlocked religious and political struggles as a complex ongoing interaction of personalities and personal agendas and as a succession of short-term events with cumulative results.


Previously neglected figures like Sir Henry Vane and John Wheelwright assume leading roles in the processes that nearly ended Massachusetts, while more familiar “hot Protestants” like John Cotton and Anne Hutchinson are relocated in larger frameworks. The book features a striking portrayal of the minister Thomas Shepard as an angry heresy-hunting militant, helping to set the volatile terms on which the disputes were conducted and keeping the flames of contention stoked even as he ostensibly attempted to quell them.


The first book-length treatment in forty years, Making Heretics locates its story in rich contexts, ranging from ministerial quarrels and negotiations over fine but bitterly contested theological points to the shadowy worlds of orthodox and unorthodox lay piety, and from the transatlantic struggles over the Massachusetts Bay Company’s charter to the fraught apocalyptic geopolitics of the Reformation itself. An object study in the ways that puritanism generated, managed, and failed to manage diversity, Making Heretics carries its account on into England in the 1640s and 1650s and helps explain the differing fortunes of puritanism in the Old and New Worlds.

Michael P. Winship is Professor of History at the University of Georgia and the author of Seers of God: Puritan Providentialism in the Restoration and Early Enlightenment.

"Challenging and compelling . . . spirited, skilled, clear-eyed revisionism. This bold probe into politics and personalities frees the 'free grace controversy' from interpretive convention. The episode's dynamic has never been so perceptively addressed. I was stunned by the new take on Thomas Shepard. Winship has a winner . . . a vanguard contribution to early American and Puritan studies. Read this one first!"—Michael McGiffert, Editor Emeritus, William and Mary Quarterly

"Making Heretics places the so-called antinomian controversy that wracked Massachusetts in the late 1630s in a broad perspective that reveals new facets of this much-studied event. Michael Winship's knowledge of transatlantic Puritanism and his extensive research into hitherto untapped sources have combined to create a more comprehensive picture than that previously available to us."—Mary Beth Norton, Cornell University

"Those who believe that the basic knowable facts of the antinomian controversy already have been established, have not yet read Making Heretics. Built upon the fullest canvass of the evidence yet achieved by any historian, Winship's new book offers the fullest critical reconstruction of early New England's most famed event, correcting or going beyond the standard accounts at many points."—Theodore Dwight Bozeman, University of Iowa

"This book is an impressive achievement. Winship writes crisply and lucidly, admirably portraying a world in acute flux. He has an enviable grasp of the range of acceptable disagreement among the godly in normal times and how that range could contract or even explode during a crisis. His research in both printed and manuscript sources is broad and deep. He reads texts with great care and constructs important new chronologies in the process. The result is a compelling story and a fresh synthesis."—John Murrin, Princeton University

"It has been almost forty years since the last book-length account of the 'antinomian crisis' appeared. This one will be the definitive work. Based on sound and sophisticated evidence, it offers a new conceptualization and, beyond that, gives us a fresh interpretation of New England Puritanism and Puritan politics."—Frank Lambert, author of Inventing the Great Awakening