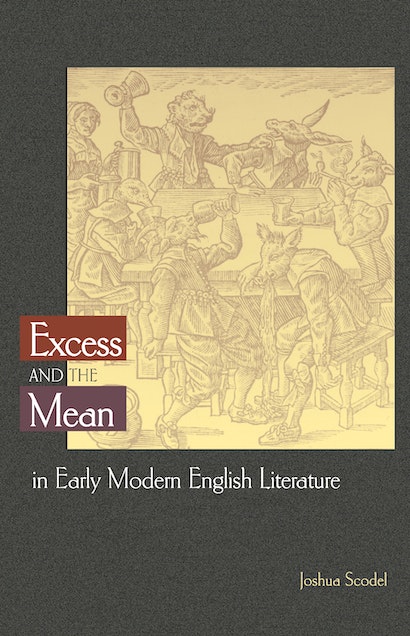 This book examines how English writers from the Elizabethan period to the Restoration transformed and contested the ancient ideal of the virtuous mean. As early modern authors learned at grammar school and university, Aristotle and other classical thinkers praised “golden means” balanced between extremes: courage, for example, as opposed to cowardice or recklessness. By uncovering the enormous variety of English responses to this ethical doctrine, Joshua Scodel revises our understanding of the vital interaction between classical thought and early modern literary culture.


Scodel argues that English authors used the ancient schema of means and extremes in innovative and contentious ways hitherto ignored by scholars. Through close readings of diverse writers and genres, he shows that conflicting representations of means and extremes figured prominently in the emergence of a self-consciously modern English culture. Donne, for example, reshaped the classical mean to promote individual freedom, while Bacon held extremism necessary for human empowerment. Imagining a modern rival to ancient Rome, georgics from Spenser to Cowley exhorted England to embody the mean or lauded extreme paths to national greatness. Drinking poetry from Jonson to Rochester expressed opposing visions of convivial moderation and drunken excess, while erotic writing from Sidney to Dryden and Behn pitted extreme passion against the traditional mean of conjugal moderation. Challenging his predecessors in various genres, Milton celebrated golden means of restrained pleasure and self-respect. Throughout this groundbreaking study, Scodel suggests how early modern treatments of means and extremes resonate in present-day cultural debates.

Joshua Scodel is Professor of English, Comparative Literature, and the Humanities at the University of Chicago. He is the author of The English Poetic Epitaph: Commemoration and Conflict from Jonson to Wordsworth and has published numerous articles on various aspects of Renaissance literature.

"A worthy contribution to the ongoing study of the mentality of the early modern period and its relationship to the classical and Christian heritage."—Choice

"[Scodel's] range of material and reference is admirable. He moves easily and with panache through five sections. . . . There is much to admire and learn from in Excess and the Mean in Early Modern English Literature."—Andrew Hadfield, Times Literary Supplement

"An excellent book, ambitious in scope and masterful in its management of scholarly resources and interpretive techniques."—Jon A. Quitslund, Renaissance Quarterly

"Scodel's subtlety and erudition make him a superb interpreter of Renaissance literature and culture. Across a remarkable range of texts, Excess and the Mean in Early Modern English Literature uncovers the intellectual and artistic passions that informed the quest for ethical norms in a period of acute political and ideological division."—David Norbrook, University of Maryland, College Park

"An absorbing, beautifully researched, and skillfully argued discussion of a topic that in Scodel's handling opens up some spacious and important perspectives on seventeenth century English life and culture. The discussion is extremely detailed and nuanced and respectful of the complexity of the evidence at hand."—Gordon Braden, University of Virginia