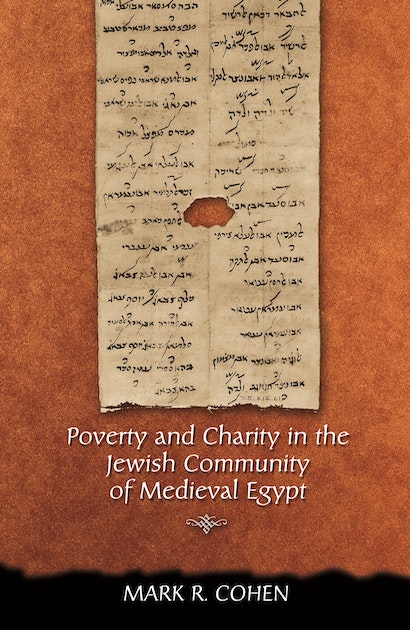 What was it like to be poor in the Middle Ages? In the past, the answer to this question came only from institutions and individuals who gave relief to the less fortunate. This book, by one of the top scholars in the field, is the first comprehensive book to study poverty in a premodern Jewish community — from the viewpoint of both the poor and those who provided for them.


Mark Cohen mines the richest body of documents available on the matter: the papers of the Cairo Geniza. These documents, located in the Geniza, a hidden chamber for discarded papers situated in a medieval synagogue in Old Cairo, were preserved largely unharmed for more than nine centuries due to an ancient custom in Judaism that prohibited the destruction of pages of sacred writing. Based on these papers, the book provides abundant testimony about how one large and important medieval Jewish community dealt with the constant presence of poverty in its midst.


Building on S. D. Goitein’s Mediterranean Society and inspired also by research on poverty and charity in medieval and early modern Europe, it provides a clear window onto the daily lives of the poor. It also illuminates private charity, a subject that has long been elusive to the medieval historian. In addition, Cohen’s work functions as a detailed case study of an important phenomenon in human history. Cohen concludes that the relatively narrow gap between the poor and rich, and the precariousness of wealth in general, combined to make charity “one of the major agglutinates of Jewish associational life” during the medieval period.

Mark R. Cohen is Professor of Near Eastern Studies at Princeton University and a well-known authority on the Cairo Geniza and the history of the Jews in the medieval Islamic world. His publications include more than 80 articles and reviews and several books, among them: Jewish Self-Government in Medieval Egypt (Princeton), which won the National Jewish Book Award for Jewish history in 1981; Jewish Life in Medieval Egypt 641-1382, translated into Arabic, 1987; The Autobiography of a Seventeenth-Century Venetian Rabbi: Leon Modena's Life of Judah, (Princeton); and, most recently, Under Crescent and Cross: The Jews in the Middle Ages, (Princeton), which has been translated into Hebrew, Turkish, and German.

"This book will undoubtedly be required reading for anyone interested in the study of poverty and charity, both in medieval Islam and in the Jewish tradition. Because its source material is so exceptionally rich, it can be argued that it is also an important contribution to the understanding of non-European premodern charitable institutions. The lucid presentation of the material, especially the translated documents in the companion volume, make this work very useful for undergraduate and graduate students."—Yossef Rapoport, International Journal of Middle East Studies

"Cohen has made the first comprehensive book-length attempt to study the subject of poverty in a premodern Jewish community. This book is an important contribution."—Miriam Hoexter, The Hebrew University of Jerusalem

"Cohen's book constitutes a significant contribution both to the study of the Jewish world of medieval Egypt and to the study of poverty and charity in medieval society generally."—Amy Singer, Tel Aviv University