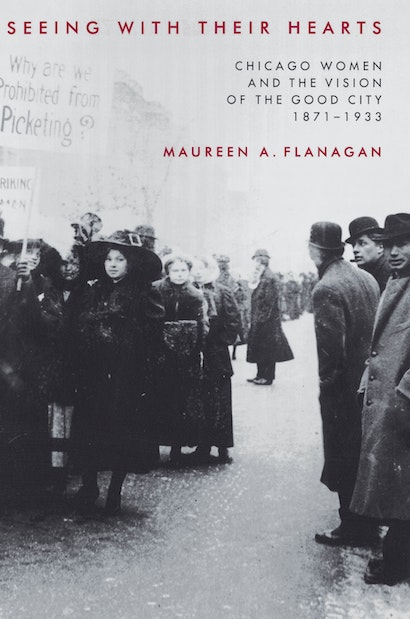 At the turn of the last century, as industrialists and workers made Chicago the hardworking City of Big Shoulders celebrated by Carl Sandburg, Chicago women articulated an alternative City of Homes in which the welfare of residents would be the municipal government’s principal purpose. Seeing With Their Hearts traces the formation of this vision from the relief efforts following the Chicago fire of 1871 through the many political battles of the Gilded Age and Progressive Era. In the process, it presses a new understanding of the roles of women in public life and writes a new history of urban America.


Heeding the call of activist Louise de Koven Bowen to become third-class passengers on the train of life, thousands of women “put their shoulders to the wheel and their whole hearts into the work” of fighting for better education, worker protections, clean air and water, building safety, health care, and women’s suffrage. Though several well-known activists appeared frequently in these initiatives, Maureen Flanagan offers compelling evidence that women established a broad and durable solidarity that spanned differences of race, class, and political experience. She also shows that these women — emphasizing their common identity as women seeking a city amenable to the needs of women, children, families, and homes — pursued a vision and goals distinct from the reform agenda of Progressive male activists. They fought hard and sometimes successfully in a variety of public places and sites of power, winning victories from increased political clout and prenatal care to municipal garbage collection and pasteurized milk.


While telling the fascinating and in some cases previously untold stories of women activists during Chicago’s formative period, this book fundamentally recasts urban social and political history.

Maureen A. Flanagan is Associate Professor of History at Michigan State University. She is the author of Charter Reform in Chicago and the editor of the Journal of the Gilded Age and Progressive Era.

"An important book on activist women's perspectives on the modern city. . . . Flanagan's study will become a new model for studying urban and women's history."—Choice

"This is a well-written and illuminating study of women reformers in Chicago. . . . Flanagan clearly has done extensive work with often under-utilized sources, bringing to light the world of activist women in the early twentieth-century city."—Elizabeth Jozwiak, H-Net Reviews

"Grounded in exhaustive research. . . . Flanagan's book contributes to historiographical debates over urban development, municipal politics, and women's contribution to both. Women may have failed in their attempts to transform Chicago 'from the City of Big Shoulders into a City of Homes.' Flanagan, however, succeeds in telling us why."—Thomas Winter, Reviews in American History

"In this well-researched book with a cast of thousands, Maureen A. Flanagan accomplishes several important historiographical tasks relevant not just to Chicago history but to a larger understanding of the wellsprings of Progressive reform campaigns."—Mina Carson, Journal of American History

"This book is a major achievement that brilliantly weaves history and historiography into a seamless narrative of Chicago women's political activism from the Great Fire of 1871 to the New Deal. Reevaluating the ways in which we understand the roles of women in public life, it poses a provocative challenge to the field of American social history. It may become one of those pivotal books that change how we look at the history of cities, politics, race, and class."—Harold Platt, author of The Electric City

"Seeing with Their Hearts is significant as both a case study and a synthesis of current work on women's roles in Progressive politics. It forces a retelling of the standard political history of cities during the Progressive Era, showing that women activists pursued an independent agenda that must be taken into account if the era is to be understood."—Ann Keating, author of Building Chicago