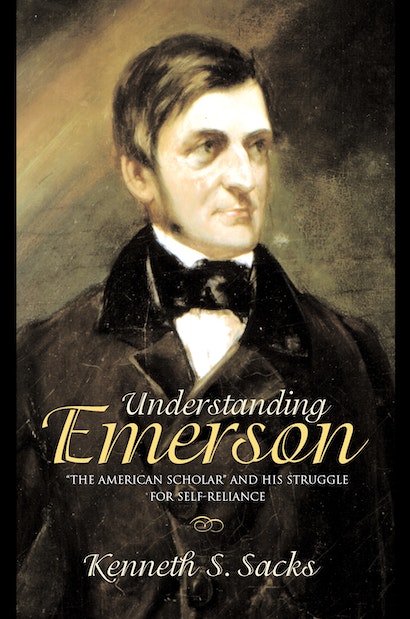 A seminal figure in American literature and philosophy, Ralph Waldo Emerson is considered the apostle of self-reliance, fully alive within his ideas and disarmingly confident about his innermost thoughts. Yet the circumstances around “The American Scholar” oration — his first great public address and the most celebrated talk in American academic history — suggest a different Emerson. In Understanding Emerson, Kenneth Sacks draws on a wealth of contemporary correspondence and diaries, much of it previously unexamined, to reveal a young intellectual struggling to define himself and his principles.


Caught up in the fierce dispute between his Transcendentalist colleagues and Harvard, the secular bastion of Boston Unitarianism and the very institution he was invited to honor with the annual Phi Beta Kappa address, Emerson agonized over compromising his sense of self-reliance while simultaneously desiring to meet the expectations of his friends. Putting aside self-doubts and a resistance to controversy, in the end he produced an oration of extraordinary power and authentic vision that propelled him to greater awareness of social justice, set the standard for the role of the intellectual in America, and continues to point the way toward educational reform. In placing this singular event within its social and philosophical context, Sacks opens a window into America’s nineteenth-century intellectual landscape as well as documenting the evolution of Emerson’s idealism.


Engagingly written, this book, which includes the complete text of “The American Scholar,” allows us to appreciate fully Emerson’s brilliant rebuke of the academy and his insistence that the most important truths derive not from books and observation but from intuition within each of us. Rising defiantly before friend and foe, Emerson triumphed over his hesitations, redirecting American thought and pedagogy and creating a personal tale of quiet heroism.

Kenneth S. Sacks is Professor of History at Brown University. His books include Diodorus Siculus and the First Century (Princeton) and Polybius on the Writing of History.

"A detailed, rigorous, yet highly readable and engaging story."—Library Journal

"As Sacks shows, in his public lectures Emerson took pains not to seem too controversial. . . . But standing before a closed circuit of his intellectual peers, he came out foursquare for a notion of scholarship that, for all its influence on American writers, transcended not only national but also institutional boundaries. . . . Sacks is a classical historian and is very good at showing how well Emerson's mastery of classical rhetoric served him in this address. . . . Reading Emerson's speech today, his turns of phrase may strike us as rather demure, but to his auditors they were fighting words."—Frank Wilson, The Philadelphia Inquirer

"Sack's subtle and fine-meshed Understanding Emerson examines the circumstances in which Emerson's first major public statement . . . took shape. Sacks shows how complicated the occasion was, and how easy it would have been . . . for Emerson to fulfill the expectations of his audience and Alma Mater. Instead, he heeded the hopes of young friends like Thoreau and deliberately insulted almost everyone in the audience."—Christopher Benfey, Times Literary Supplement

"Sacks's Emerson is very much a man of his milieu, a stubborn and driven Yankee. . . . Sacks reveals Emerson as a struggling, uncertain figure, whose hunger to achieve self-reliance warred constantly against his need for approval from other quarters. His great effort of self-assertion seems more sympathetic, and less self-indulgent, when seen in this light."—Wilfred M. McClay, The Weekly Standard

"Understanding Emerson is a superb piece of historical research brought to life by a deep intuition about one of the most fascinating phenomena of the nineteenth century: the mind of Ralph Waldo Emerson. Kenneth Sacks has got that mind exactly right. He has grasped the curiously ungraspable quality of Emerson's thought, and by showing us, in a fineness of detail no one else has approached, how Emerson came to write 'The American Scholar,' he shows us, too, why we continue to read him."—Louis Menand, The Graduate Center of the City University of New York

"A timely and elegantly written reminder of why Emerson is America's most important intellectual."—Gordon Wood, Brown University

"Kenneth Sacks has succeeded admirably in producing a very important examination of both the ferment of reform and change in which Transcendentalism arose, and Emerson's personal struggle with that ferment. He breaks a good deal of new ground. The picture that emerges is insightful, revealing, and engaging. The book is very well written and, blessedly, jargon free."—Len Gougeon, author of Virtue's Hero: Emerson, Antislavery, and Reform, and past President of the Ralph Waldo Emerson Society (2000-2001)

"This is an engaging book—well-written, without jargon, and suitable for the educated reader as well as for the Emerson scholar interested in the details missed by many biographers and intellectual historians. I was carried along as a reader from beginning to end, and often smiled with satisfaction at the author's wit and the aptness of his use of quotations and other documentary evidence."—William Pannapacker, Hope College