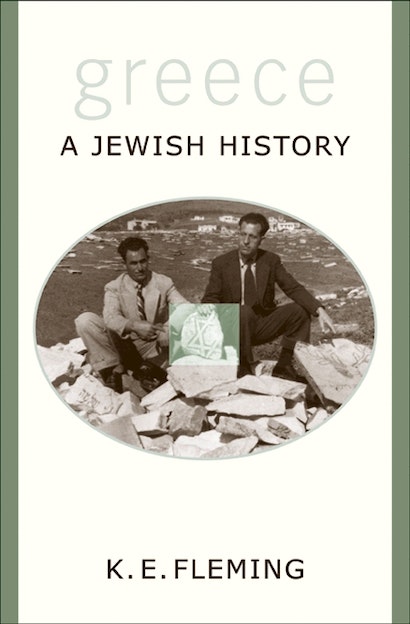 K. E. Fleming’s Greece — a Jewish History is the first comprehensive English-language history of Greek Jews, and the only history that includes material on their diaspora in Israel and the United States. The book tells the story of a people who for the most part no longer exist and whose identity is a paradox in that it wasn’t fully formed until after most Greek Jews had emigrated or been deported and killed by the Nazis.


For centuries, Jews lived in areas that are now part of Greece. But Greek Jews as a nationalized group existed in substantial number only for a few short decades — from the Balkan Wars (1912-13) until the Holocaust, in which more than 80 percent were killed. Greece — a Jewish History describes their diverse histories and the processes that worked to make them emerge as a Greek collective. It also follows Jews as they left Greece — as deportees to Auschwitz or émigrés to Palestine/Israel and New York’s Lower East Side. In such foreign settings their Greekness was emphasized as it never was in Greece, where Orthodox Christianity traditionally defines national identity and anti-Semitism remains common.

K. E. Fleming is professor of history and Alexander S. Onassis Professor of Hellenic Culture and Civilization at New York University, where she also serves as associate director of the Remarque Institute.

"With this innovative, soundly researched work Professor K. E. Fleming has filled a long-standing need for the story of Greek Jewry to be told fully."—Jewish Book World

"What is a Greek Jew? Fleming pursues this question through various Jewish experiences (Romaniot and Sephardi) during the stages of the emerging modern Greek national identity. Her well-written, gripping story argues that 'Greek Jew' is actually a phantom term that emerged formally only in 1920 with governmental recognition of the Salonika community, and developed among young Jews during the 1930s, later concretizing in the Nazi concentration camps and the Jewish Diasporas to Palestine and the U.S."—S. Bowman, Choice

"This book is an excellent effort to explain the quandary of the Jews of Greece during the country's turbulent 200-year history."—Jay Levinson, Jewish Tribune

"This is not a 'religious book' meant to inspire. It is the very well told story of a once flourish Jewish community whose history must never be forgotten."—Jay Levinson, Jewish Magazine

"K. E. Fleming has produced an insightful historical overview of the Jewish presence in Greece from the establishment of the Greek state in the early nineteenth century to the post-Holocaust era. . . . [U]ntil the appearance of Fleming's work there was no overarching account of the Jewish experience in modern Greece, and this book fills that lacuna extremely well."—Alexander Kitroeff, American Historical Review

"This fascinating book examines the concepts of identity and nationality as experienced by Jews, while paying tribute to those who were lost in World War II and to the righteous gentiles who saved the remnants of the community. Professor Fleming has written an important work on a little-known subject. It belongs in all academic Judaic collections."—Barbara M. Bibel, Association of Jewish Libraries Newsletter

"This volume, which displays solid scholarly standards, is also highly interesting as it follows the multiple destinies of these Jewish groups and demonstrates how complex Jewish history is—how diverse and how difficult to categorize. Fleming has succeeded in escaping preconceived attitudes and in treating the object of her investigation with detachment but also with the empathy required for all genuinely good research projects."—Esther Benbassa, Journal of Modern History

"Greece—a Jewish History is a superb book, one in whose company I would include very few that I've read over the past five, maybe even ten, years. The story Fleming tells is an incredible—and moving—reading experience. The best comprehensive account in English of the 'Greek' Jewish experience, it is written in an easy and fluid style that allows for the drama of the story to come through gradually until, in the Auschwitz years, it becomes almost overwhelming. It is a masterful piece of research and historical craftsmanship. The story of Greek Jewry has found its historian. This wonderful book also announces Fleming as, among other things, a Jewish historian of the first order."—David Myers, UCLA Center for Jewish Studies