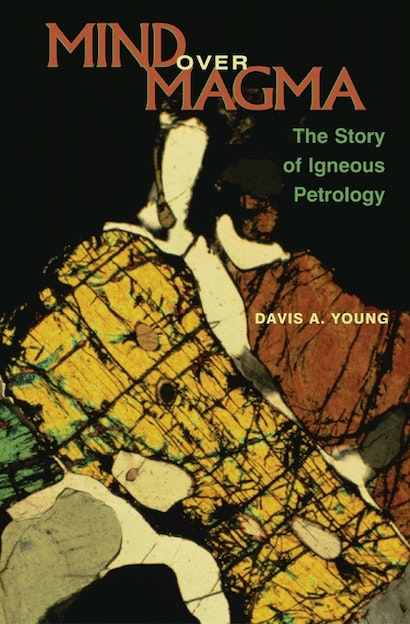 Mind over Magma chronicles the scientific effort to unravel the mysteries of rocks that solidified on or beneath Earth’s surface from the intensely hot, molten material called magma. The first-ever comprehensive history of the study of such igneous rocks, it traces the development of igneous petrology from ancient descriptions of volcanic eruptions to recent work incorporating insights from physical chemistry, isotope studies, and fluid dynamics.


Intellectual developments in the field — from the application of scientific methods to the study of rocks to the discovery of critical data and the development of the field’s major theories — are considered within their broader geographical, social, and technological contexts. Mind over Magma examines the spread of igneous petrology from western Europe to North America, South Africa, Japan, Australia, and much of the rest of the world. It considers the professionalization and Anglicization of the field, detailing changes in publication outlets, the role of women, and the influence of government funding. The book also highlights the significant role that technological developments — including the polarizing microscope, high-temperature quenching furnaces, and instrumental analysis — have played in the discovery of new data and development of revolutionary insights into the nature of igneous rocks.


Both an engagingly told story and a major reference, Mind over Magma is the only available history of this important field. As such, it will be appreciated by petrologists, geochemists, and other geologists as well as by those interested in the history of science.

Davis A. Young is Professor of Geology at Calvin College and the author of several books, including N. L. Bowen and Crystallization-Differentiation: The Evolution of a Theory.

"Wherever you turn, there is something of interest in this exquisitely researched text. . . . Mind over Magma is a landmark publication. Any petrologist who chooses not to read this book will be doing themselves, and their students, a great disservice."—Nick Petford, Times Higher Education Supplement

"Young's account is so well organized and written that, at least for a petrologist, it is a real page-turner."—Donald H. Lindsley, Science

"A fascinating treatise of how igneous petrology has evolved, from description to process, from painstaking detail to the big picture, shaped throughout by advances in analytical technology. . . . [I]t is a fitting time to have its past documented in a scholarly and highly readable volume."—Chris Hawkesworth, Geoscientist

"This is such a big and rich book, a grand and meticulous tour of more than two hundred years of igneous petrology, that it is difficult to compress it for a review. . . . Igneous petrologists and students thereof should read Mind over Magma both for the intrinsic value of its story and in order to avoid reinventing some petrological wheel. Historians of science, particularly of geology, will appreciate it as an exemplar of their craft."—Sally Newcomb, Isis

"Mind over Magma is strongly recommended to the professional petrologist and any scientifically literate person who wants an introduction to petrology. . . . [A] few selected readings also would be a fine accompaniment to an undergraduate course in petrology."—Nicholas Heavens, Journal of Geology

"Mind over Magma is well worth dipping into. It is a fund of information, scholarly written and is . . . up to date. . . . It is the best that is available."—Proceedings of the Geologists' Association

"On more than 600 pages the author traces the history of the study of igneous rocks. In doing so, he does not trace the chronology of events but pursues the development of certain ideas or evaluates the impact of new techniques. . . . . [T]he author succeeds to show, that many controversies, the solution of which appears very evident from our current point of knowledge, were rooted in the then available understanding of igneous petrology, i.e. even the proponents of ideas that were finally shown to be false, had good arguments. . . . I can only recommend: buy now!"—Dr. Ulrich Knittel, Vulkanismus.de

"This is a scholarly, exhaustive, deep, refreshing, thought-provoking, and humbling history of our science by a skilled practitioner and fluent writer. I never expected to see such a thing, nor to enjoy it so much."—S. A. Morse, Department of Geosciences, University of Massachusetts

"This book fulfills the lack of a modern analysis of the history of igneous petrology and will be a significant contribution. The author is a well-known igneous petrologist who appreciates the extent to which many geological questions are still awaiting definitive answers."—Hatten S. Yoder, Jr., Geophysical Laboratory, Carnegie Institution of Washington