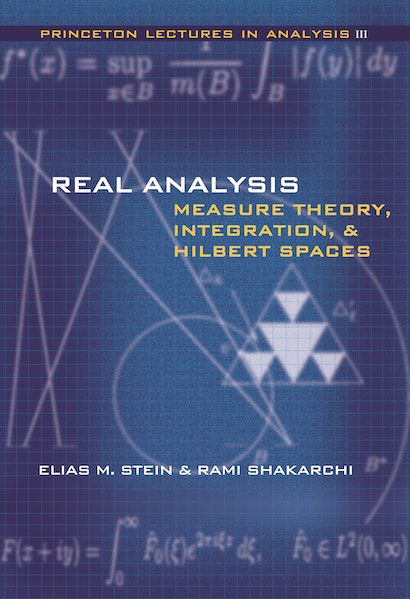 Real Analysis is the third volume in the Princeton Lectures in Analysis, a series of four textbooks that aim to present, in an integrated manner, the core areas of analysis. Here the focus is on the development of measure and integration theory, differentiation and integration, Hilbert spaces, and Hausdorff measure and fractals. This book reflects the objective of the series as a whole: to make plain the organic unity that exists between the various parts of the subject, and to illustrate the wide applicability of ideas of analysis to other fields of mathematics and science.


After setting forth the basic facts of measure theory, Lebesgue integration, and differentiation on Euclidian spaces, the authors move to the elements of Hilbert space, via the L2 theory. They next present basic illustrations of these concepts from Fourier analysis, partial differential equations, and complex analysis. The final part of the book introduces the reader to the fascinating subject of fractional-dimensional sets, including Hausdorff measure, self-replicating sets, space-filling curves, and Besicovitch sets. Each chapter has a series of exercises, from the relatively easy to the more complex, that are tied directly to the text. A substantial number of hints encourage the reader to take on even the more challenging exercises.


As with the other volumes in the series, Real Analysis is accessible to students interested in such diverse disciplines as mathematics, physics, engineering, and finance, at both the undergraduate and graduate levels.


Also available, the first two volumes in the Princeton Lectures in Analysis:

"We are all fortunate that a mathematician with the experience and vision of E.M. Stein, together with his energetic young collaborator R. Shakarchi, has given us this series of four books on analysis."—Steven George Krantz, Mathematical Reviews

"This series is a result of a radical rethinking of how to introduce graduate students to analysis. . . . This volume lives up to the high standard set up by the previous ones."—Fernando Q. Gouvêa, MAA Review

"As one would expect from these authors, the exposition is, in general, excellent. The explanations are clear and concise with many well-focused examples as well as an abundance of exercises, covering the full range of difficulty. . . . [I]t certainly must be on the instructor's bookshelf as a first-rate reference book."—William P. Ziemer, SIAM Review