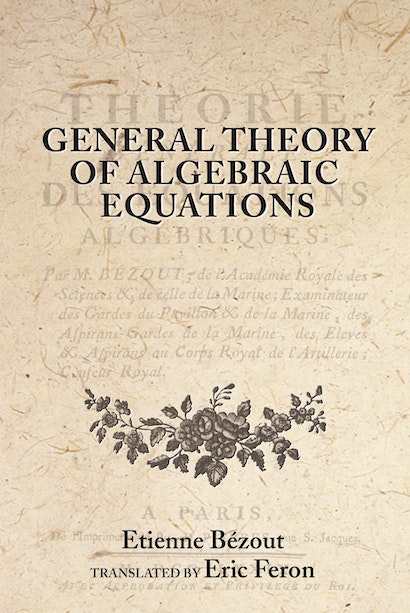 This book provides the first English translation of Bezout’s masterpiece, the General Theory of Algebraic Equations. It follows, by almost two hundred years, the English translation of his famous mathematics textbooks. Here, Bézout presents his approach to solving systems of polynomial equations in several variables and in great detail. He introduces the revolutionary notion of the “polynomial multiplier,” which greatly simplifies the problem of variable elimination by reducing it to a system of linear equations. The major result presented in this work, now known as “Bézout’s theorem,” is stated as follows: “The degree of the final equation resulting from an arbitrary number of complete equations containing the same number of unknowns and with arbitrary degrees is equal to the product of the exponents of the degrees of these equations.”


The book offers large numbers of results and insights about conditions for polynomials to share a common factor, or to share a common root. It also provides a state-of-the-art analysis of the theories of integration and differentiation of functions in the late eighteenth century, as well as one of the first uses of determinants to solve systems of linear equations. Polynomial multiplier methods have become, today, one of the most promising approaches to solving complex systems of polynomial equations or inequalities, and this translation offers a valuable historic perspective on this active research field.

Etienne Bézout (1730-1783) is credited with the invention of the determinant (named Bézoutian by Sylvester) as well as several key innovations to solve simultaneous polynomial equations in many unknowns. By the time of his death, he was a member of the French Academy of Sciences and the Examiner of the Guards of the Navy and of the Corps of Artillery. Eric Feron Dutton/Ducoffe Professor of Aerospace Engineering at Georgia Institute of Technology, and Visiting Professor of Aerospace Engineering at Massachusetts Institute of Technology, where he is affiliated with the Laboratory for Information and Decision Systems and the Operations Research Center. He is also an Adviser to the French Academy of Technologies. His interests span numerical analysis, optimization, systems analysis, and their applications to aerospace engineering.

"This is not a book to be taken to the office, but to be left at home, and to be read on weekend, as a romance. We already know the plot, but here we meet all the characters, major and minor."—Cicero Fernandes de Carvalho, Mathematical Reviews

"Bézout's classic General Theory of Algebraic Equations is . . . an immortal evergreen of astonishing actual relevance. . . . [I]ts first English translation is utmost welcome and appropriate, and a great gain for the international mathematical community, both today and in the future."—Werner Kleinert, Zentralblatt MATH