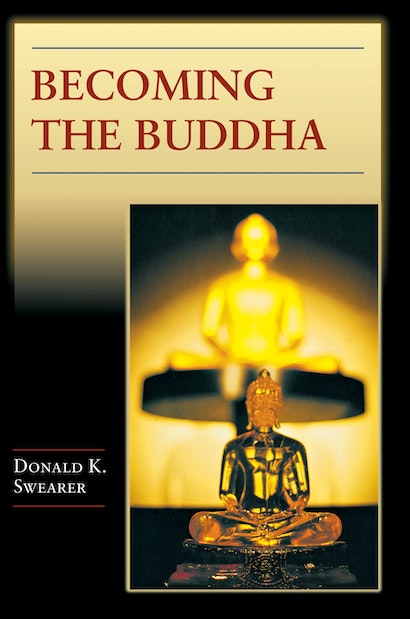 Becoming the Buddha is the first book-length study of a key ritual of Buddhist practice in Asia: the consecration of a Buddha image or “new Buddha,” a ceremony by which the Buddha becomes present or alive. Through a richly detailed, accessible exploration of this ritual in northern Thailand, an exploration that stands apart from standard text-based or anthropological approaches, Donald Swearer makes a major contribution to our understanding of the Buddha image, its role in Buddhist devotional life, and its relationship to the veneration of Buddha relics. Blending ethnography, analysis, and Buddhist texts related to this mimetic reenactment of the night of the Buddha’s enlightenment, he demonstrates that the image becomes the Buddha’s surrogate by being invested with the Buddha’s story and charged with the extraordinary power of Buddhahood. The process by which this transformation occurs through chant, sermon, meditation, and the presence of charismatic monks is at the heart of this book.


Known as “opening the eyes of the Buddha,” image consecration traditions throughout Buddhist Asia share much in common. Within the cultural context of northern Thailand, Becoming the Buddha illuminates scriptural accounts of the making of the first Buddha image; looks at debates over the ritual’s historical origin, at Buddhological insights achieved, and at the hermeneutics of absence and presence; and provides a thematic comparison of several Buddhist traditions.

Donald K. Swearer is the Charles & Harriet Cox McDowell Professor of Religion and Philosophy at Swarthmore College. His recent books include The Buddhist World of Southeast Asia and The Legend of Queen Cama.

"Wide-ranging. . . . Although this study concentrates on one ritual in one region of Thailand, Donald K. Swearer extrapolates from the relatively small area of focus to illuminate a large area of debate."—Catherine Newell, Journal of the Siam Society

"A thorough and magisterial study. . . . This book will be essential reading for anyone interested in Buddhism, Buddhist 'theology,' images, and the material culture of religions."—John E. Cort, Religious Studies Review

"In Becoming the Buddha Donald Swearer has provided a multifaceted historical, ethnographic, and comparative study of an image consecration ritual that lies close to the very heart of popular Buddhist piety. Drawing on more than four decades of textual research and field experience in northern Thailand, Swearer provides compelling descriptions and probing analyses that will command the attention of scholars in Buddhist studies and ritual studies for many years to come."—Frank Reynolds, co-translator of Three Worlds of King Ruang: A Thai Buddhist Cosmology

"Reading Becoming the Buddha was an exciting, note-taking, eye-opening experience that stimulated my thinking about the field and about my own work. This book is the product of a mature scholar whose many years in the field and whose prolific writings have made him one of the world's top authorities on Thai religion and culture, and yet it retains a freshness in the approach it takes, the topic it tackles, and the conclusions it upholds. There is nothing like it in print that I know of. I have every confidence that it will become, in a few years' time, a much referred to, often quoted, classic."—John S. Strong, Bates College, author of The Legend and Cult of Upagupta

"This is the first major book-length study of image consecration for Indian or Southeast Asian Buddhism that is accessible to a general readership. The scholarship behind it is enormous. Donald Swearer has collected a great range of texts and translated them adeptly while also incorporating ethnographic materials that are not only excellent but at times quite delightful."—Richard Davis, Bard College, author of Lives of Indian Images