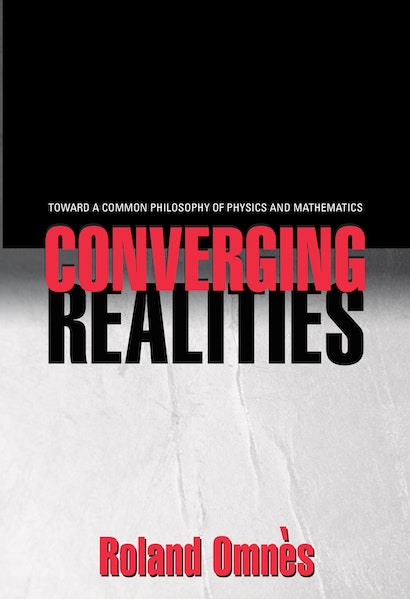 The mysterious beauty, harmony, and consistency of mathematics once caused philosopher Hilary Putnam to term its existence a “miracle.” Now, advances in the understanding of physics suggest that the foundations of mathematics are encompassed by the laws of nature, an idea that sheds new light on both mathematics and physics.


The philosophical relationship between mathematics and the natural sciences is the subject of Converging Realities, the latest work by one of the leading thinkers on the subject. Based on a simple but powerful idea, it shows that the axioms needed for the mathematics used in physics can also generate practically every field of contemporary pure mathematics. It also provides a foundation for current investigations in string theory and other areas of physics.


This approach to the nature of mathematics is not really new, but it became overshadowed by formalism near the end of nineteenth century. The debate turned eventually into an exclusive dialogue between mathematicians and philosophers, as if physics and nature did not exist. This unsatisfactory situation was enforced by the uncertain standing of physical reality in quantum mechanics.


The recent advances in the interpretation of quantum mechanics (as described in Quantum Philosophy, also by Omnès) have now reconciled the foundations of physics with objectivity and common sense. In Converging Realities, Roland Omnès is among the first scholars to consider the connection of natural laws with mathematics.

Roland Omnès is Professor Emeritus of Theoretical Physics at the Université de Paris-Sud. Having made a career in particle physics and astrophysics, he contributed significantly to the modern renewal in the foundations and interpretation of quantum mechanics.

"It is refreshing to find a physicist joining today's ongoing public conversation about the nature of mathematics. . . . As a physicist who loves mathematics, in Converging Realities [Roland Omnès] comes forward with a new idea, which he proposes to call 'physism.' . . . I hope Omnès's daring proposal is taken seriously by those interested in these matters and receives the analysis and critique it deserves."—Reuben Hersh, American Scientit

"Roland Omnès provides a systematic development of mathematics and classical reality and then the quantum world, with specific notes on the associated mathematical structures and historical developments. He argues persuasively, with many examples, how the realm of the possible (mathematics) and the realm of the actual (physics) are converging yet distinct realities."—Choice

Roland Omnes has a knack for writing in at least three of the world's major languages: English, French, and Science. I have at times found a lifetime's worth of insight in a single paragraph of his. The present work is no exception. For though I disagreed with whole swaths of the book, I learned much from it and had to fight every inch of the way to shore up my position against its onslaught. No discussion of reality should ignore this powerful and novel exposition."—Christopher A. Fuchs, Bell Labs, Lucent Technologies

"To explain the seemingly miraculous effectiveness of mathematics in the natural sciences, Omnès valiantly undertakes to show that mathematical structures are a distillate of the laws of nature. On his way to this goal, he gives a concise, yet highly readable and surprisingly illuminating overview of the main ideas of quantum mechanics."—Roberto Torretti, Professor Emeritus, University of Puerto Rico