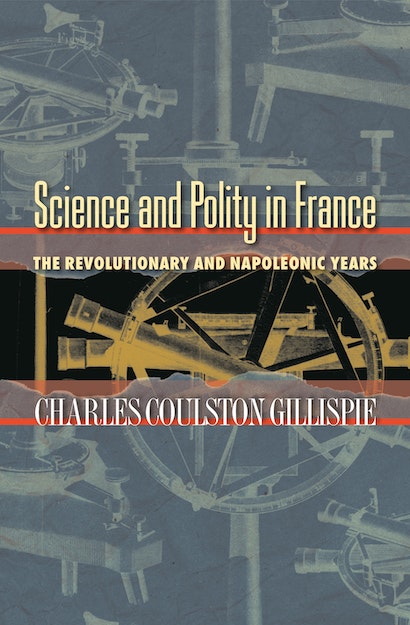 From the 1770s through the 1820s the French scientific community predominated in the world to a degree that no other scientific establishment did in any period prior to the Second World War. In his classic Science and Polity in France: The End of the Old Regime, Charles Gillispie analyzed the cultural, political, and technical factors that encouraged scientific productivity on the eve of the Revolution. In the present monumental and elegantly written sequel to that work, which Princeton is reissuing concurrently, he examines how the revolutionary and Napoleonic context contributed to modernization both of politics and science.


In politics, argues Gillispie, the central feature of this modernization was conversion of subjects of a monarchy into citizens of a republic in direct contact with a state enormously augmented in power. To the scientific community, attainment of professional status was what citizenship was to all Frenchmen in the republic proper, namely the license to self-governance and dignity within the respective contexts. Revolutionary circumstances set up a resonance between politics and science since practitioners of both were future oriented in their outlook and scornful of the past.


Among the creations of the First French Republic were institutions providing the earliest higher education in science. From them emerged rigorously trained people who constituted the founding generation in the disciplines of mathematical physics, positivistic biology, and clinical medicine. That scientists were able to achieve their ends was owing to the expertise they provided the revolutionary and imperial authorities in education, medicine, warfare, empire building, and industrial technology.

Charles Coulston Gillispie is Dayton-Stockton Professor Emeritus of History at Princeton University, where he founded the program in History and Philosophy of Science in 1960. His books include The Edge of Objectivity; Lazare Carnot Savant; The Montgolfier Brothers and the Invention of Aviation; Pierre-Simon Laplace, 1749-1827: A Life in Exact Science; and Science and Polity in France: The End of the Old Regime (all Princeton). He was also the editor of the Dictionary of Scientific Biography (16 volumes, Scribners, 1970-1980). In 1997 he was awarded the Balzan Prize in the History and Philosophy of Science.

"Gillispie is, clearly, thoroughly at home in the language and concepts of the sciences: of pure mathematics, chemistry, mathematical physics and astronomy, biology and natural history, not to mention engineering, mining, and agronomy. He is also a master of lucid explanation, so far as explanation to the ignorant can go, as well being the teller of some highly gripping tales; and he has an admirable, logically taut, often quietly witty, prose style."—P.N. Furbank, New York Review of Books

"This volume can be read as either a saga of science or a series of short, loosely interconnected stories. The author is at his best when he is reporting colorful episodes, portraying a character, disentangling a plot or dissecting an institution."—Nature

"This review cannot do justice to a magisterial work that illuminates a critical phase in the historical relationship between thought and action, the classical theme of humanism. . . . As a work of synthesis and interpretation, it is written with the clarity, elegance, and insight the subject deserves."—Joseph W. Konvitz, American Historical Review

"So thoroughly does Gillispie know his subject, that his account reads more like Thomas Carlyle's gripping The French Revolution: A History than a dry and bloodless effort of modern scholarship. Like Carlyle, Gillispie seems to feel what his subjects felt, to enter with them into the stresses, difficulties and challenges of the moment. And Gillispie's history, like Carlyle's, must be read as a journey through the period, with all its vicissitudes, and not as a linear narrative or as a monograph aiming to prove a point of interest to only a few specialists."—Jed Z. Buchwald, American Scientist

"Gillispie's argument is simple and elegant . . . the research is flawless, and every page exudes erudition. . . . He has left few—if any—stones unturned in accomplishing this magisterial work."—Eric A. Arnold, Jr., History

"[This] new book is a superbly researched, challenging and provocative reconstruction of the decades from 1770 to 1820 when, in Gillispie's words, France could boast 'a larger scientific population than the rest of Europe put together.'. . . Here . . . is impeccable scholarship as well as clarity of style, footnotes opening up scores of research projects, and a few of the idiosyncrasies for which Gillispie is famous and which, it should be mentioned do not fall into an easy hero-worship mood. . . . [T]he book offers the best account written so far of science during the Revolutionary and Napoleonic years."—Pietro Corsi, British Journal for the History of Science

"This much anticipated, magisterial second volume of Gillispies's Science and Polity in France at the End of the Old Regime . . . [is] a powerful chronicle of the social engagements of the natural sciences during the pivotal moment when they first took on modern political responsibilities."—Jessica Riskin, Modern History

"A masterpiece of thorough research, this is a major work of scholarship by one of the great historians of our time and quite possibly the most distinguished of a distinguished generation of historians of science. It is thoroughly original and written with grace and clarity. The book ought to be fundamental not only for historians of science, but for anyone who wishes to appreciate the events and significance of the French Revolution."—Theodore M. Porter, author of Karl Pearson: The Scientific Life in a Statistical Age

"A remarkable piece of work and a worthy sequel to Science and Polity in France: The End of the Old Regime. Written in an elegant and punchy style, the book is sustained by a strong thesis that will interest a wide range of historians. It will also be seen, like the previous volume, as an important work of reference. Where else could we find such finely documented accounts of the last year of the Académie des Sciences, of the institutions and personalities of the revolutionary period, or of the introduction of the revolutionary calendar and the metric system?"—Robert Fox, author of Science, Industry, and the Social Order in Post-Revolutionary France