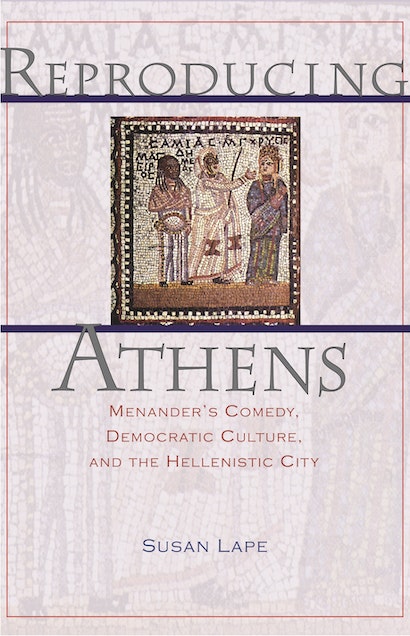 Reproducing Athens examines the role of romantic comedy, particularly the plays of Menander, in defending democratic culture and transnational polis culture against various threats during the initial and most fraught period of the Hellenistic Era.


Menander’s romantic comedies — which focus on ordinary citizens who marry for love — are most often thought of as entertainments devoid of political content. Against the view, Susan Lape argues that Menander’s comedies are explicitly political. His nationalistic comedies regularly conclude by performing the laws of democratic citizen marriage, thereby promising the generation of new citizens. His transnational comedies, on the other hand, defend polis life against the impinging Hellenistic kingdoms, either by transforming their representatives into proper citizen-husbands or by rendering them ridiculous, romantic losers who pose no real threat to citizen or city.


In elaborating the political work of romantic comedy, this book also demonstrates the importance of gender, kinship, and sexuality to the making of democratic civic ideology. Paradoxically, by championing democratic culture against various Hellenistic outsiders, comedy often resists the internal status and gender boundaries on which democratic culture was based. Comedy’s ability to reproduce democratic culture in scandalous fashion exposes the logic of civic inclusion produced by the contradictions in Athens’s desperately politicized gender system.


Combining careful textual analysis with an understanding of the context in which Menander wrote, Reproducing Athens profoundly changes the way we read his plays and deepens our understanding of Athenian democratic culture.

Susan Lape is Assistant Professor of Classics at the University of California, Irvine.

"As its title suggests, this book is much more than a commentary on the extant plays and fragments of the only surviving 'new comedy' playwright. Lape aims to see Menander's plays as both social commentary and political statement"—Choice

"This impressive contribution to New Comedy studies. . . . Interpret[s] Menander's comedies not so much from literary and theatrical angles but from the ways that they relate to the history—military, political and social—of Menander's time. . . . Throughout this book Susan Lape appears in full command of the many areas relevant to her arguments."—W. Geoffrey Arnott, International Journal of the Classical Tradition

"Lape reads Menander's plays with extremely close attention to the historical moments to which they can be dated and with a fine eye for the political implications of their plots. This is new and striking, making this book a highly significant contribution to the field."—Alan Zeitlin, Bard College

"This book is timely and will move the level of debate about Menander to a higher plane. It should find a wide readership in gender studies and comparative literature, as well as among students of ancient literature and culture. It has much to say not just about New Comedy but also about the organization of the Athenian polis in general."—Richard Hunter, Cambridge University