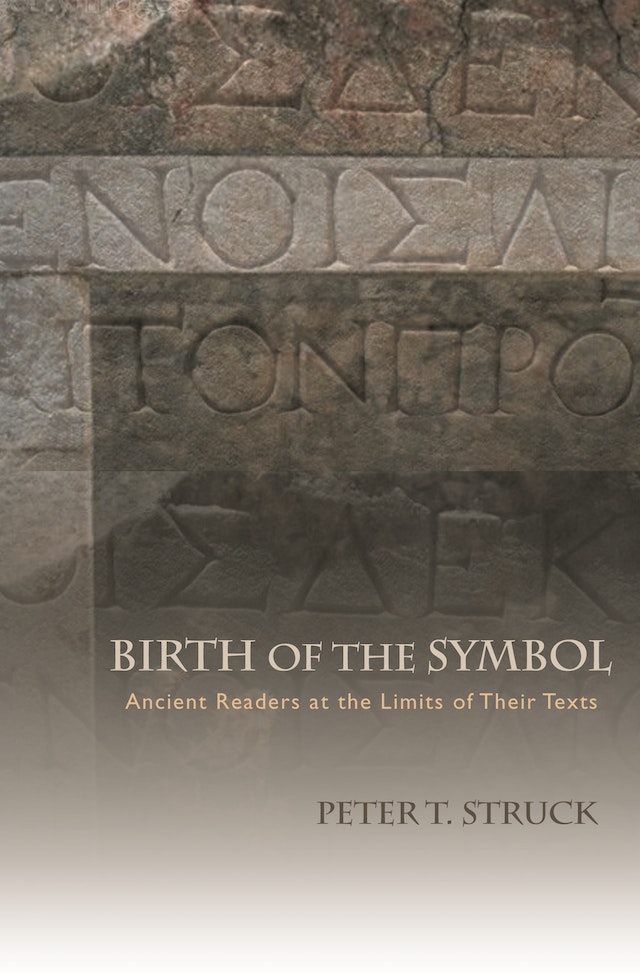 Nearly all of us have studied poetry and been taught to look for the symbolic as well as literal meaning of the text. Is this the way the ancients saw poetry? In Birth of the Symbol, Peter Struck explores the ancient Greek literary critics and theorists who invented the idea of the poetic “symbol.”


The book notes that Aristotle and his followers did not discuss the use of poetic symbolism. Rather, a different group of Greek thinkers — the allegorists — were the first to develop the notion. Struck extensively revisits the work of the great allegorists, which has been underappreciated. He links their interest in symbolism to the importance of divination and magic in ancient times, and he demonstrates how important symbolism became when they thought about religion and philosophy. “They see the whole of great poetic language as deeply figurative,” he writes, “with the potential always, even in the most mundane details, to be freighted with hidden messages.”

Birth of the Symbol offers a new understanding of the role of poetry in the life of ideas in ancient Greece. Moreover, it demonstrates a connection between the way we understand poetry and the way it was understood by important thinkers in ancient times.

Peter T. Struck is Assistant Professor of Classics at the University of Pennsylvania. He was a fellow at the National Humanities Center.

"A rich and fascinating account of how the ideas of symbolism and allegorical reading developed over the course of classical antiquity. It is a remarkable achievement."—David Konstan, Literary Imagination

"This book offers a remarkably comprehensive study of ancient symbolic interpretation from the Pre-Socratics to the later Neoplatonists and beyond."—Derek Collins, Classical World

"This is a challenging yet rewarding journey through a millenium of texts, thoughts, and interpretations. As against the defensive stance taken by most studies of ancient 'allegory,' Peter Struck gives a resolute appraisal of a persistent and accepted way of understanding literature, a method of interpretation which, in opposition to Aristotelian rhetoric, tries to get beyond the limits of the text in order to find a surplus of meaning, to achieve 'more' or 'deeper' insights. This takes him from the beginnings of Greek literature down to the Neoplatonists of Late Antiquity. For the first time, a non-mimetic approach to literary theory becomes possible: 'Divine' poetry is not secondary reproduction of material realities but is to disclose higher forms of being. Struck keeps close to the texts, presented in translation and often in the original language, too, while maintaining a high theoretical level as to language and interpretation in general. His book makes always clear and not seldom exciting reading."—Walter Burkert, author of Creation of the Sacred and Greek Religion