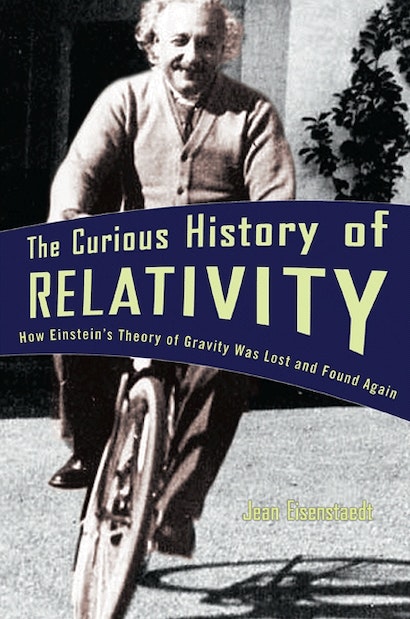 Black holes may obliterate most things that come near them, but they saved the theory of general relativity. Einstein’s theory was quickly accepted as the true theory of gravity after its publication in 1915, but soon took a back seat in physics to quantum mechanics and languished for decades on the blackboards of mathematicians. Not until the existence of black holes by Stephen Hawking and Roger Penrose in the 1960s, after Einstein’s death, was the theory revived.


Almost one hundred years after general relativity replaced Newton’s theory of gravitation, The Curious History of Relativity tells the story of both events surrounding general relativity and the techniques employed by Einstein and the relativists to construct, develop, and understand his almost impenetrable theory. Jean Eisenstaedt, one of the world’s leading experts on the subject, also discusses the theory’s place in the evolution of twentieth-century physics. He describes the main stages in the development of general relativity: its beginnings, its strange crossing of the desert during Einstein’s lifetime while under heated criticism, and its new life from the 1960s on, when it became vital to the understanding of black holes and the observation of exotic objects, and, eventually, to the discovery of the accelerating universe. We witness Einstein’s construction of his theory, as well as the work of his fascinated, discouraged, and enthusiastic colleagues — physicists, mathematicians, and astronomers.


Written with flair, The Curious History of Relativity poses — and answers — the difficult questions raised by Einstein’s magnificent intellectual feat.

"This book is a treasure from a world expert. It offers a deeper understanding of Einstein's theory and, above all, it is an inspiring account of his unique scientific style."—Simon Mitton, Times Higher Education Supplement

"In this English translation, Eisenstaedt . . . reviews how Einstein developed the theory that would supplant Newton's principles of gravity. The author reviews the period from the 1920s to the 1950s, during which Einstein confronted his critics. Finally, Eisenstaedt ponders what will become of general relativity as today's physicists search for a unifying theory of the quantum and gravitational domains."—Science News

"Praise for the original, French edition: "With its limpid prose, this book reads like a novel. . . . It is a treasure for all those who seek to understand Einstein's theory.""—Ciel & Espace

"What makes his book stand out among the legion of other titles on Einstein and relativity is the historical context into which Eisenstaedt places his scientific discussion."—Library Journal

"Praise for the original, French edition: "Eisenstaedt's book . . . takes us into the universe of an exceptional theory, and offers an irresistible chance to delve into the mind of one of the most brilliant scientists of the twentieth century.""—Bulletin critique du livre en français

"Praise for the original, French edition: "Virtually free of mathematical formulas, this book offers accessible reading . . . to all amateur scientists who are by definition curious spirits. . . . A big 'thank you' to Jean Eisenstaedt for this excellent work!""—L'Astronomie

"Praise for the original, French edition: "An accessible and precisely written book for all non-mathematicians who wish to comprehend the complexities raised by the theory of relativity.""—Aldéran

"A faithful history of Einstein's astonishing theory of gravitation based on curvature of the four-dimensional space-time in which we live, created when no observed datum pointed in that direction. . . . For professionals in other fields, energetic readers, and college-level students."—Choice

"This book gives a lucid account of the struggle to find the right concepts to understand how the speed of light can be independent of the motion of its source."—D. Lynden-Bell, The Observatory Magazine

"Jean Eisenstaedt takes us on a bold and exciting journey into the world of general relativity, bringing insight and wit to a difficult subject. His explanation of the geometrical nature of the theory is masterful. Eisenstaedt is one of the few historians who has tackled in a clear way how the physics community first accepted relativity, then ignored it, and now uses it as an everyday tool in their work."—Jeffrey Crelinsten, The Impact Group, Toronto, and author of Einstein's Jury: The Race to Test Relativity

"Eisenstaedt's very readable book offers an excellent introduction to the fascinating history of general relativity, written by one of the leading experts in the field. Taking a broad perspective, it shows how Einstein's theory emerges from a long historical tradition, and how it continues to pose challenging problems to this day."—Jürgen Renn, Director of the Max Planck Institute for the History of Science, Berlin

"Jean Eisenstaedt's book is highly significant for the history of science because it is really the first serious look at the evolution of concepts in the history of general relativity after Einstein's death. It was the development of the concept of the black hole between the late 1950s and late 1960s that constituted the real birth of general relativity, and this story and the lead up to it is the story that Eisenstaedt tells here with unmatched authority. This book is, then, a founding text that sets out the historical context of this fascinating issue. The story of the discovery of black holes is a remarkable intellectual parable in itself, and Eisenstaedt tells it brilliantly."—Daniel J. Kennefick, University of Arkansas, Fayetteville, and coeditor of the Einstein Papers Project

"Beginning with Einstein's early work on a general theory of relativity at the start of the twentieth century, Eisenstaedt's book guides us through the attempts of several generations of relativists to resolve and detect this fascinating theory's strange physical consequences. From Schwarzschild's 'magical sphere' to Wheeler's 'black hole,' fifty years of scientific indifference and even opposition to this puzzling branch of physics elapsed before relativistic cosmology was reborn at last, and the theory of general relativity recaptured the public spotlight."—Diana Kormos Buchwald, Einstein Papers Project, Caltech