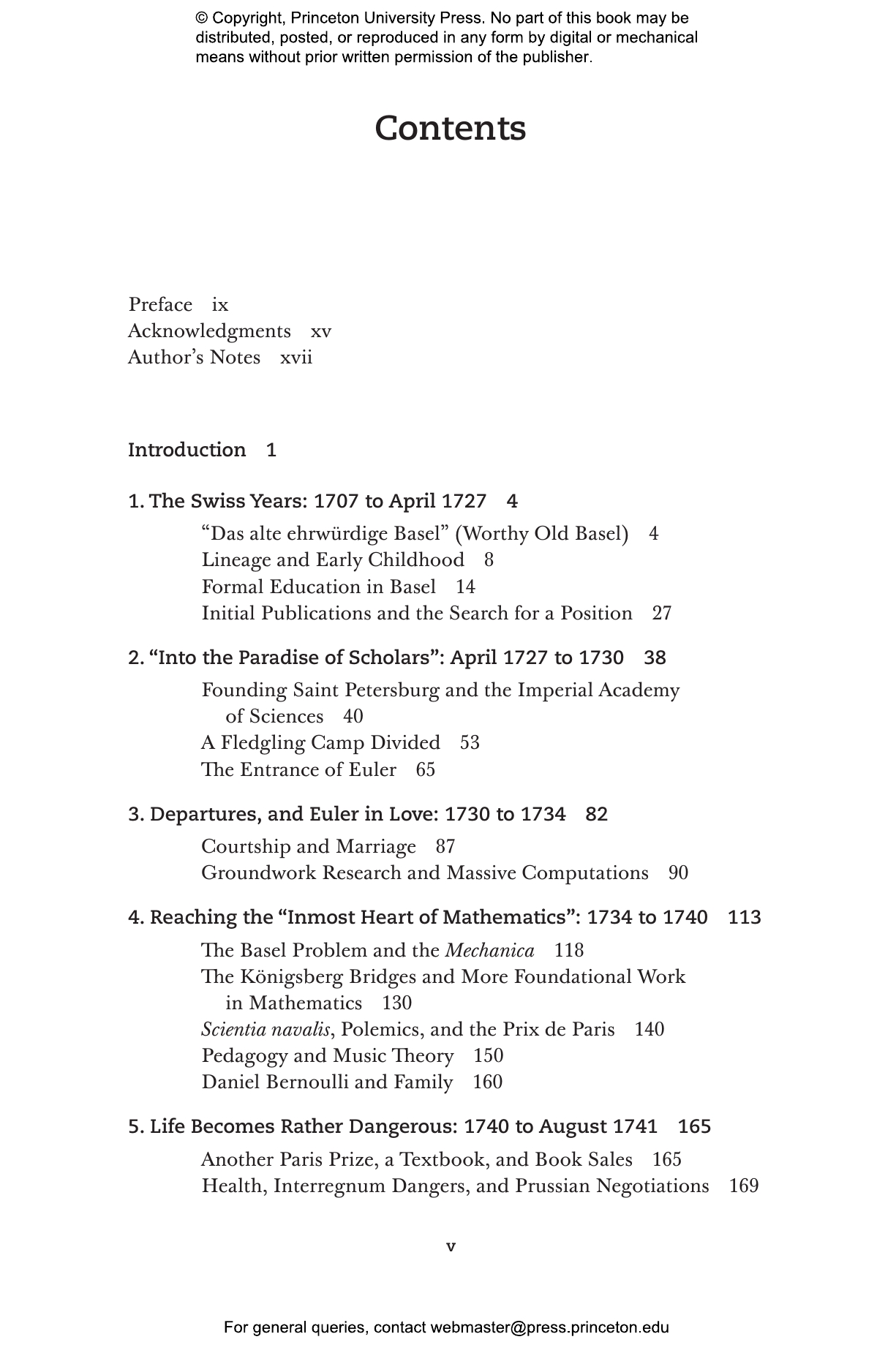 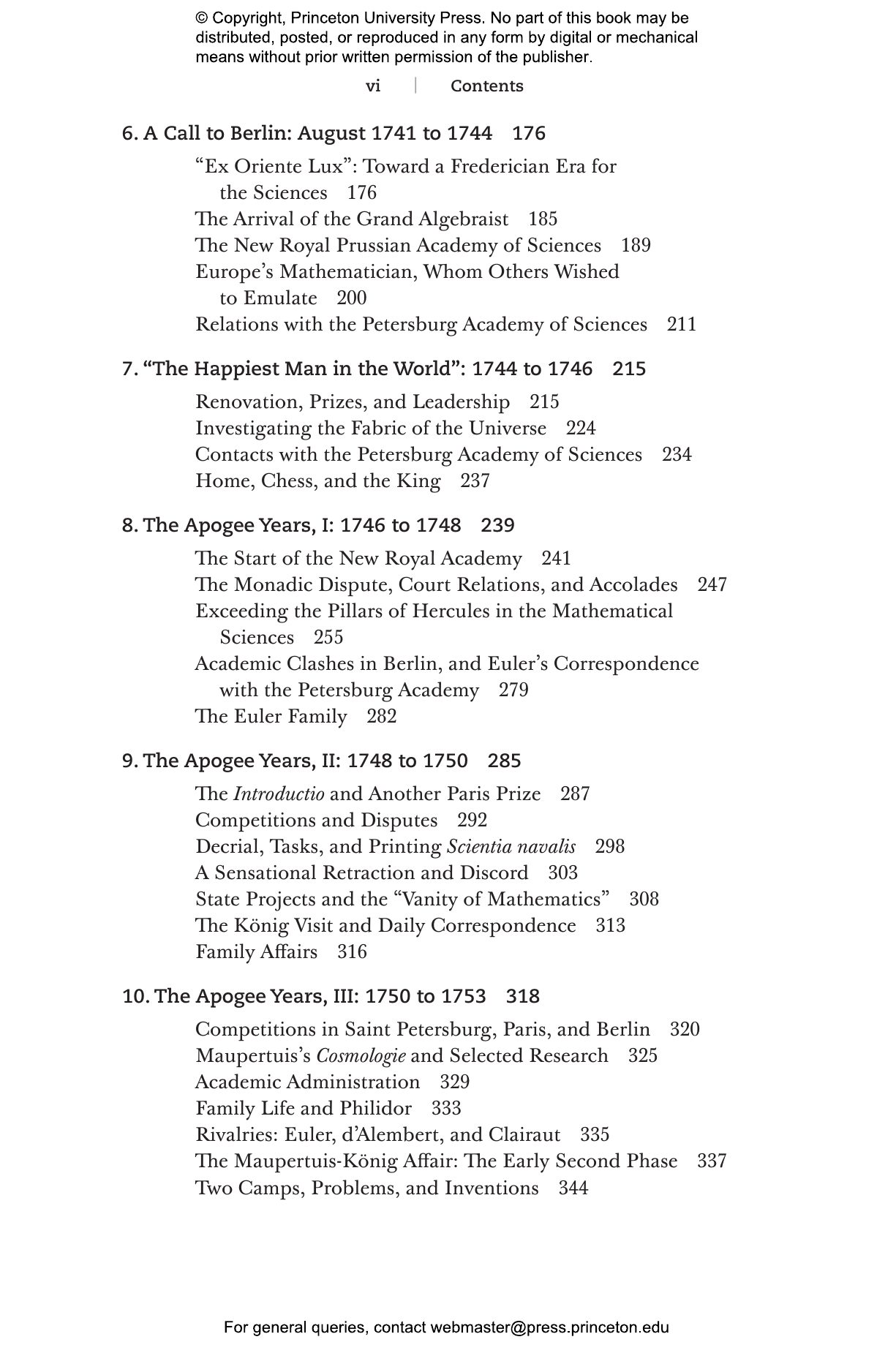 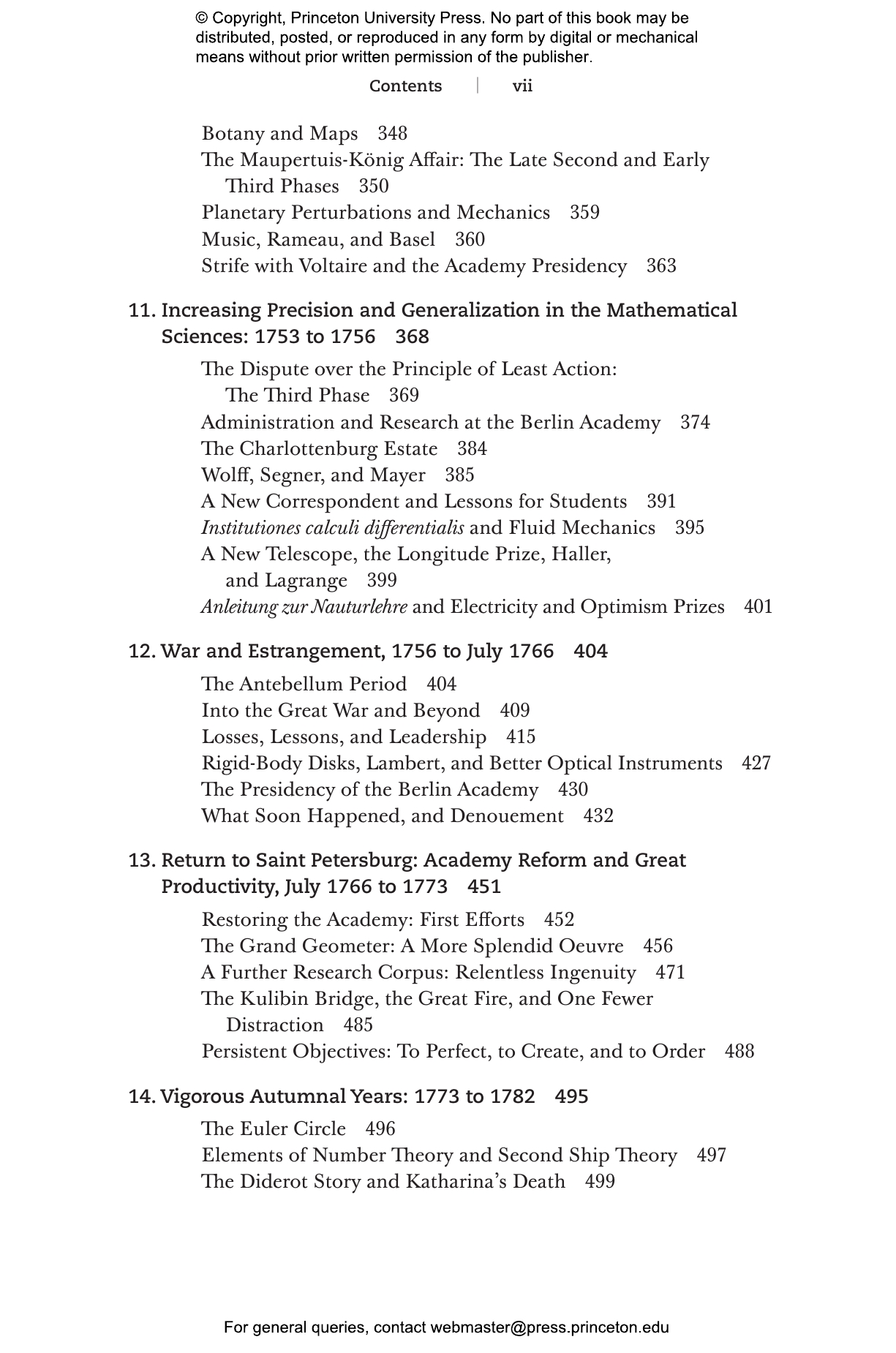 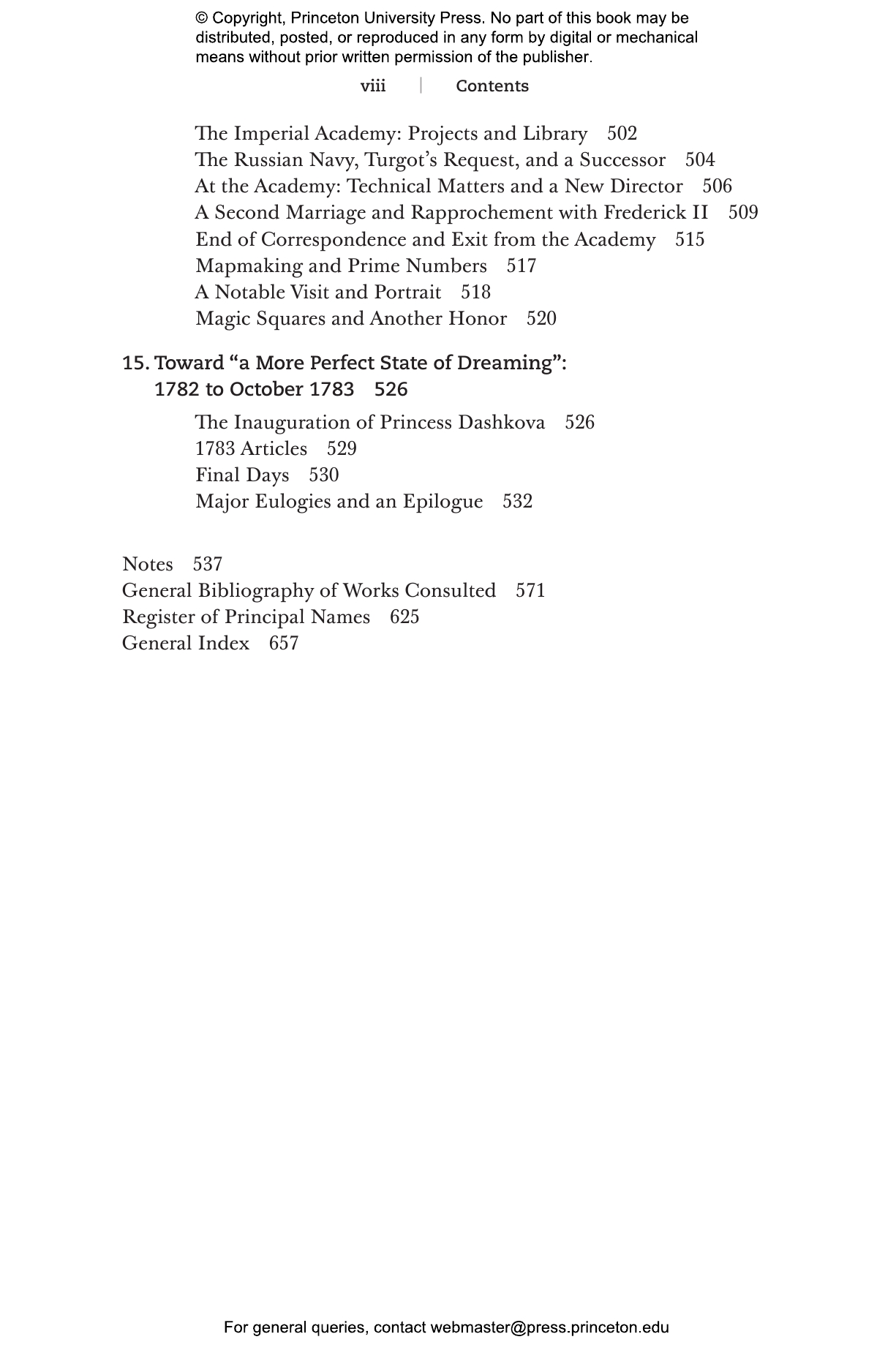 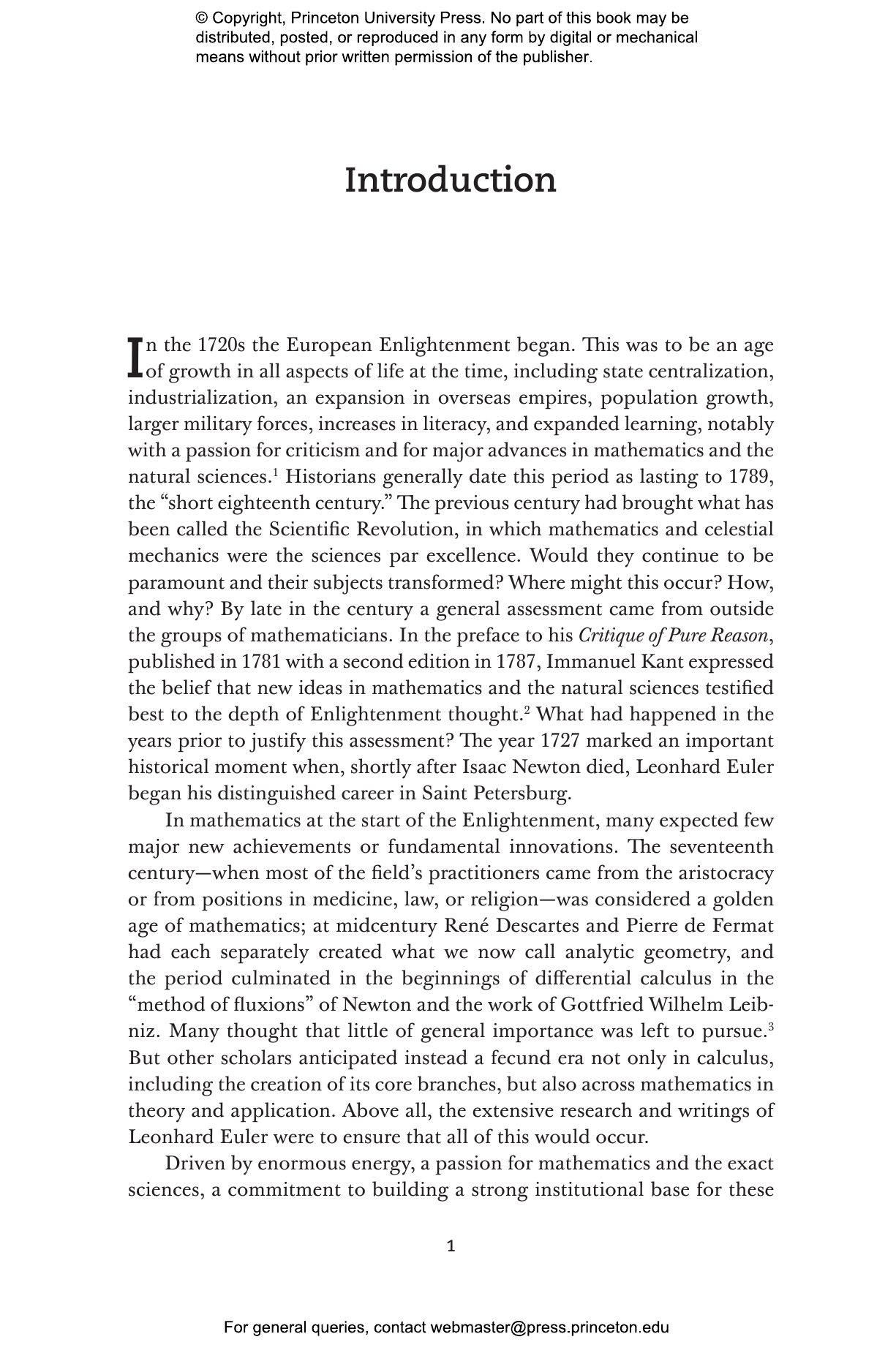 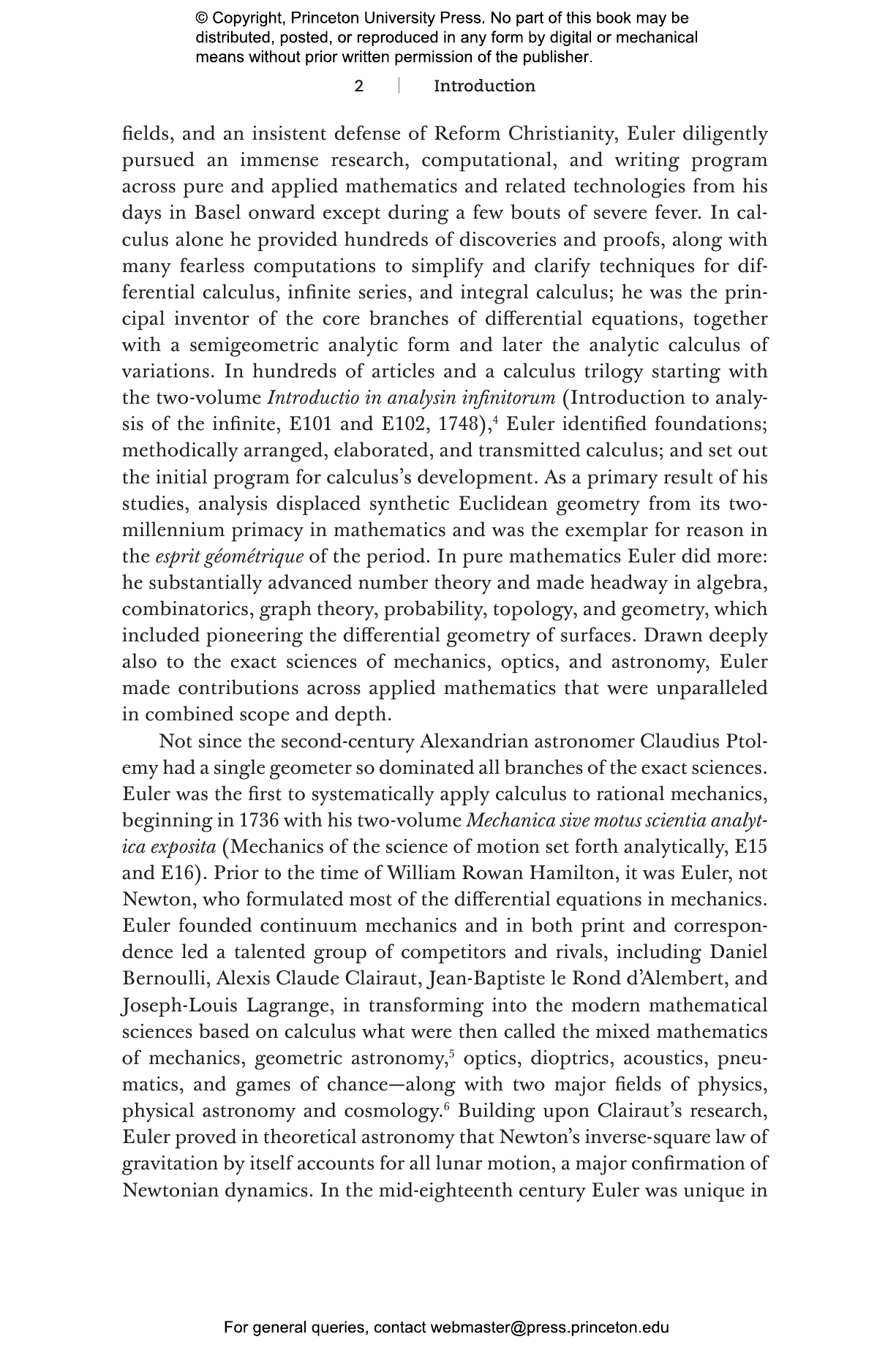 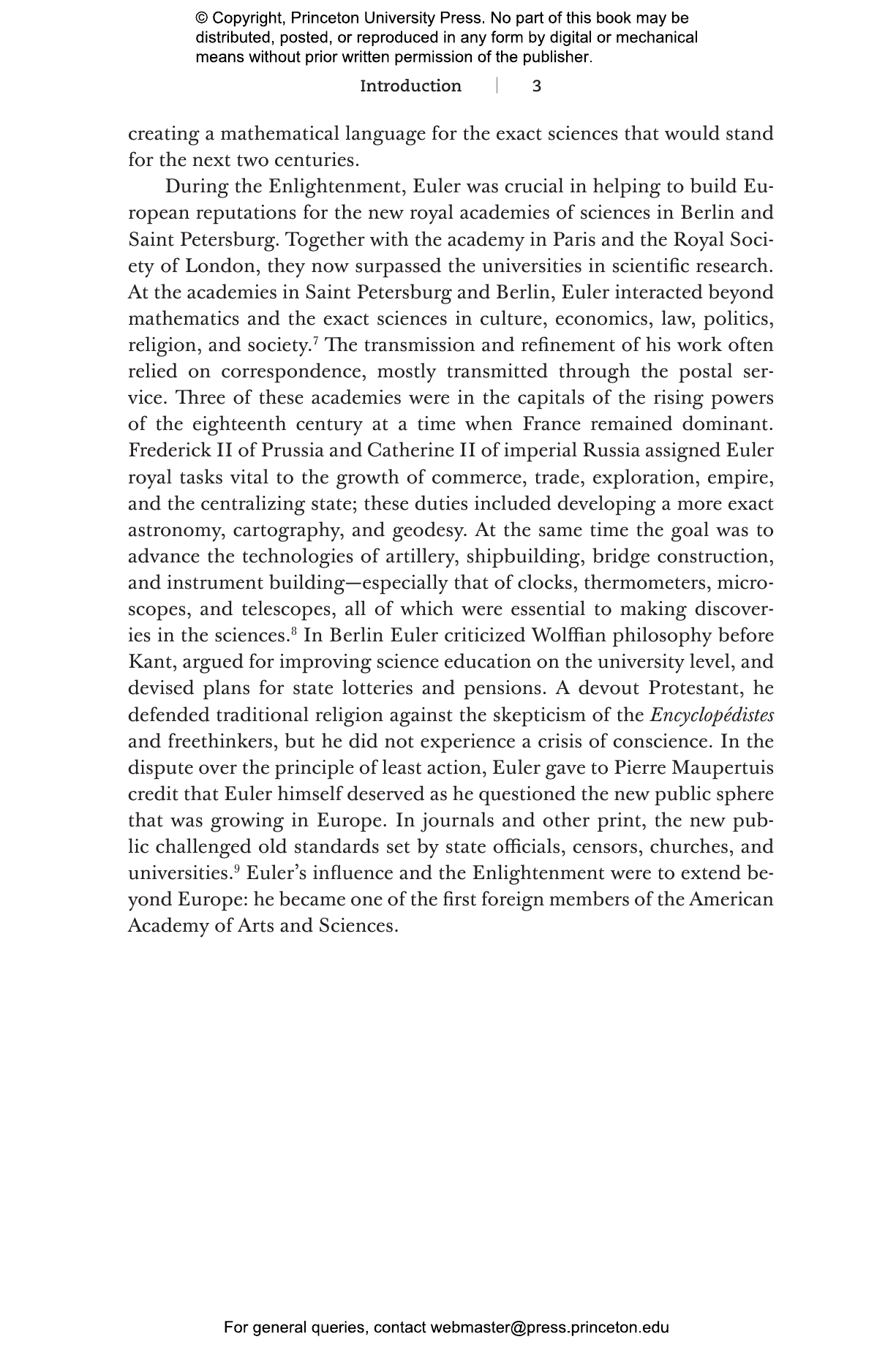 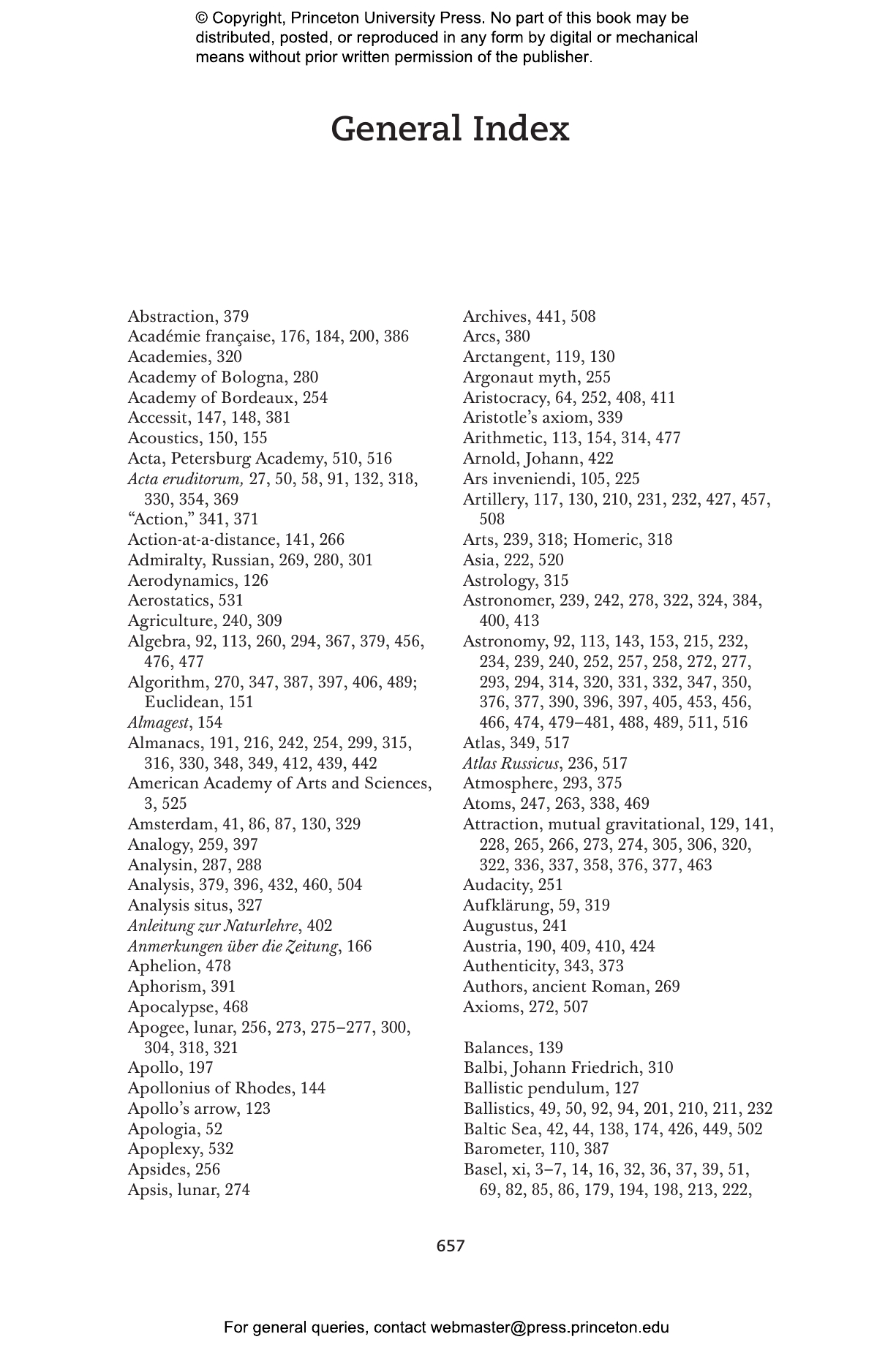 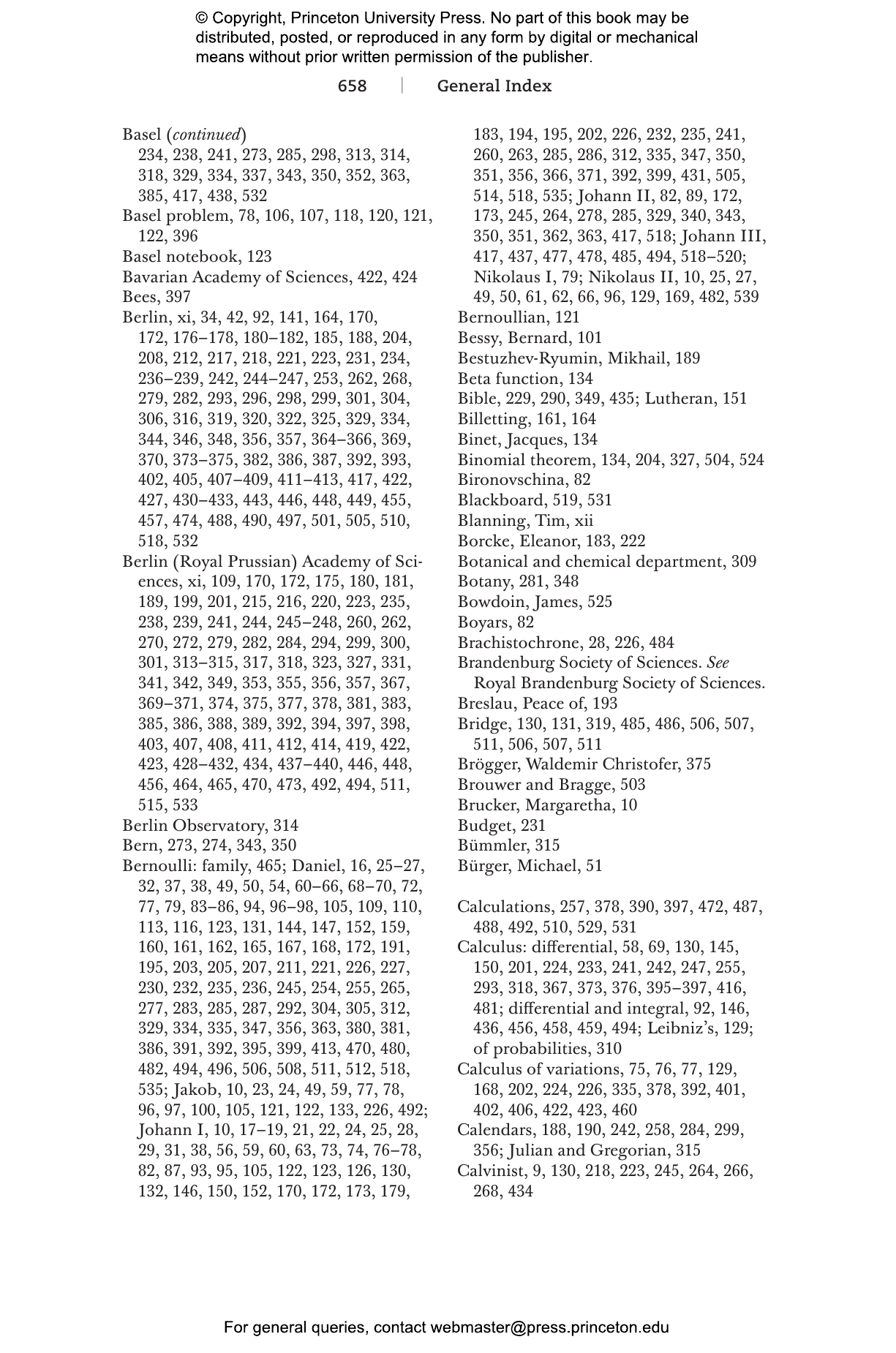 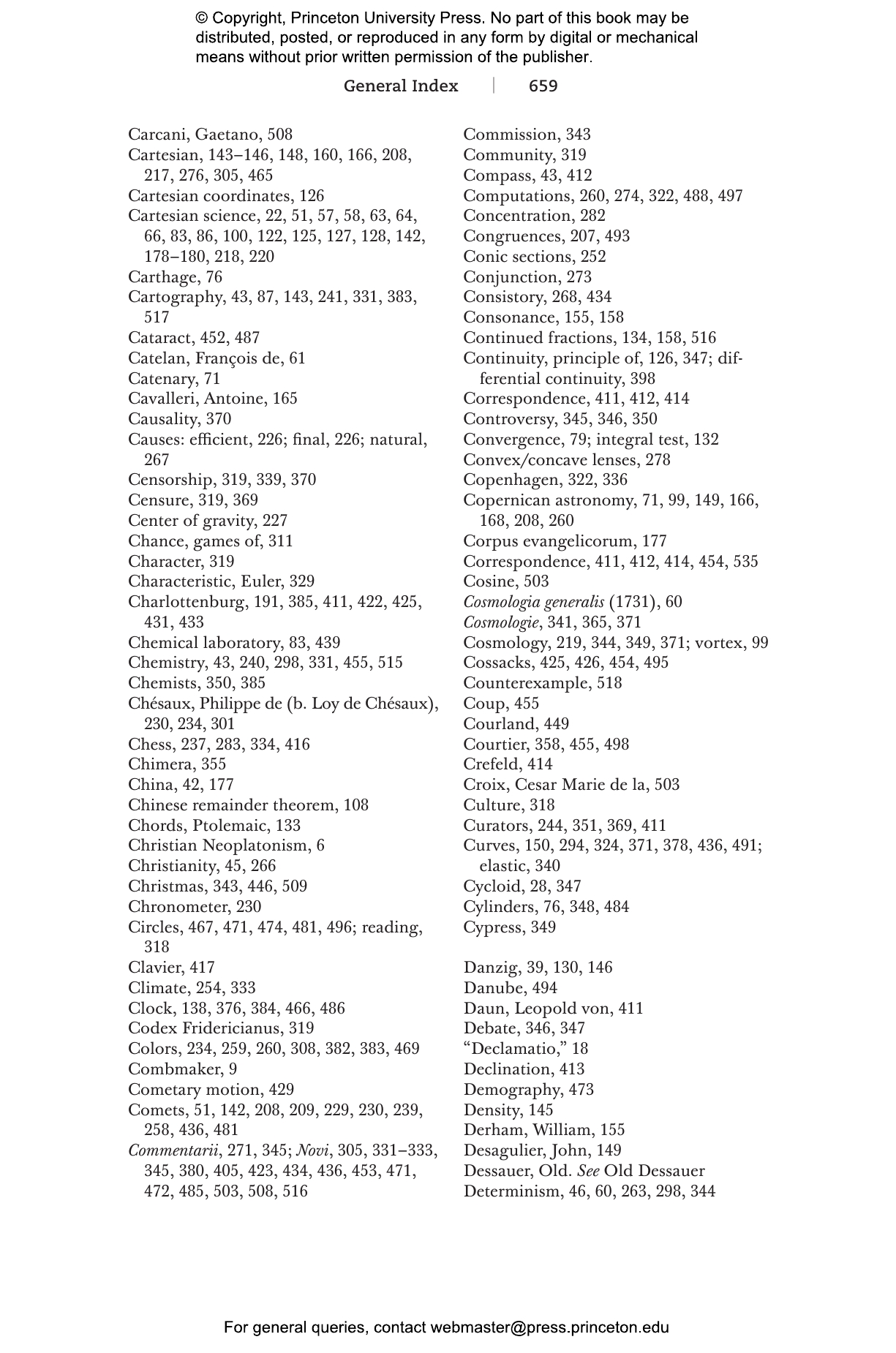 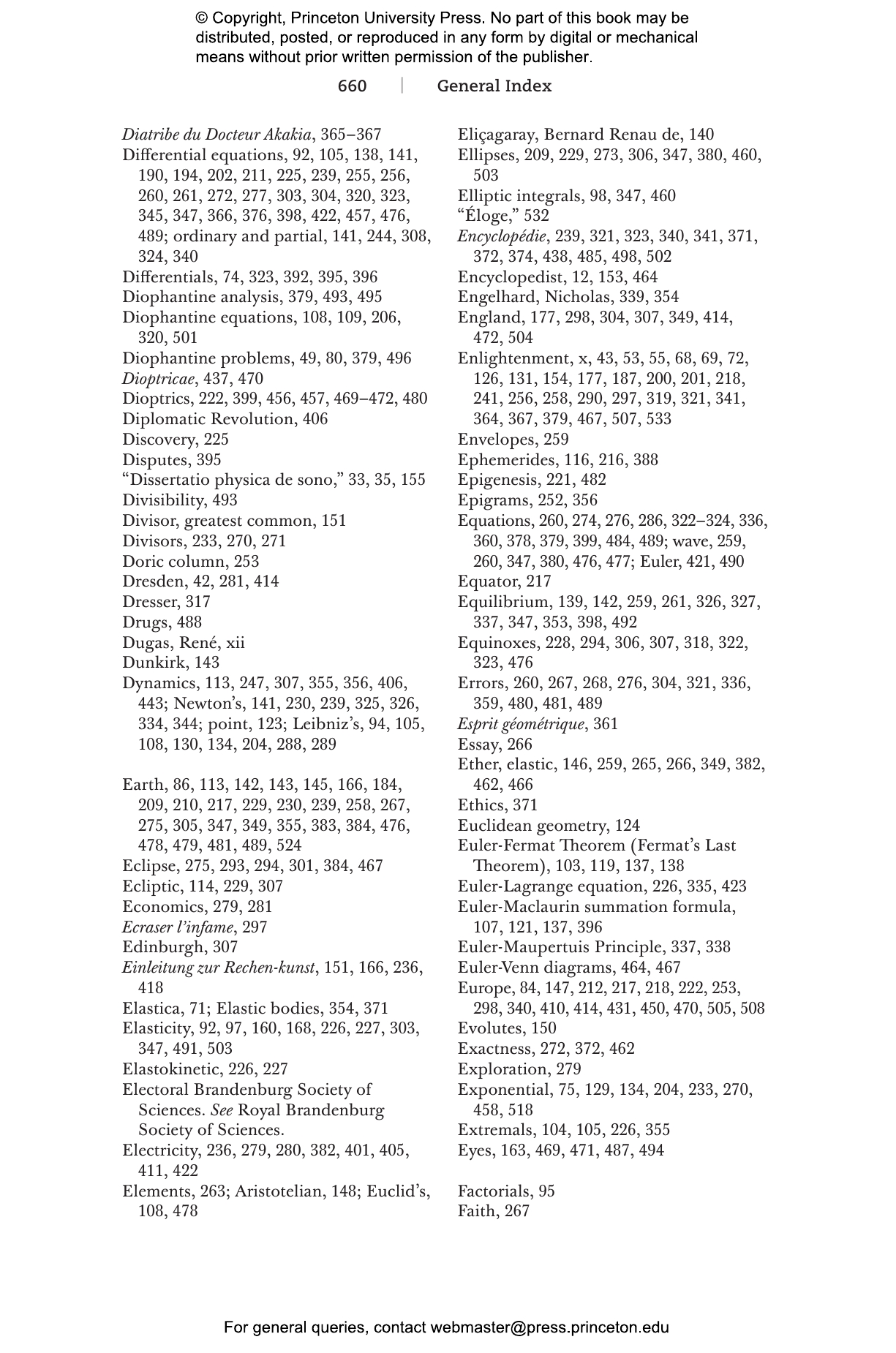 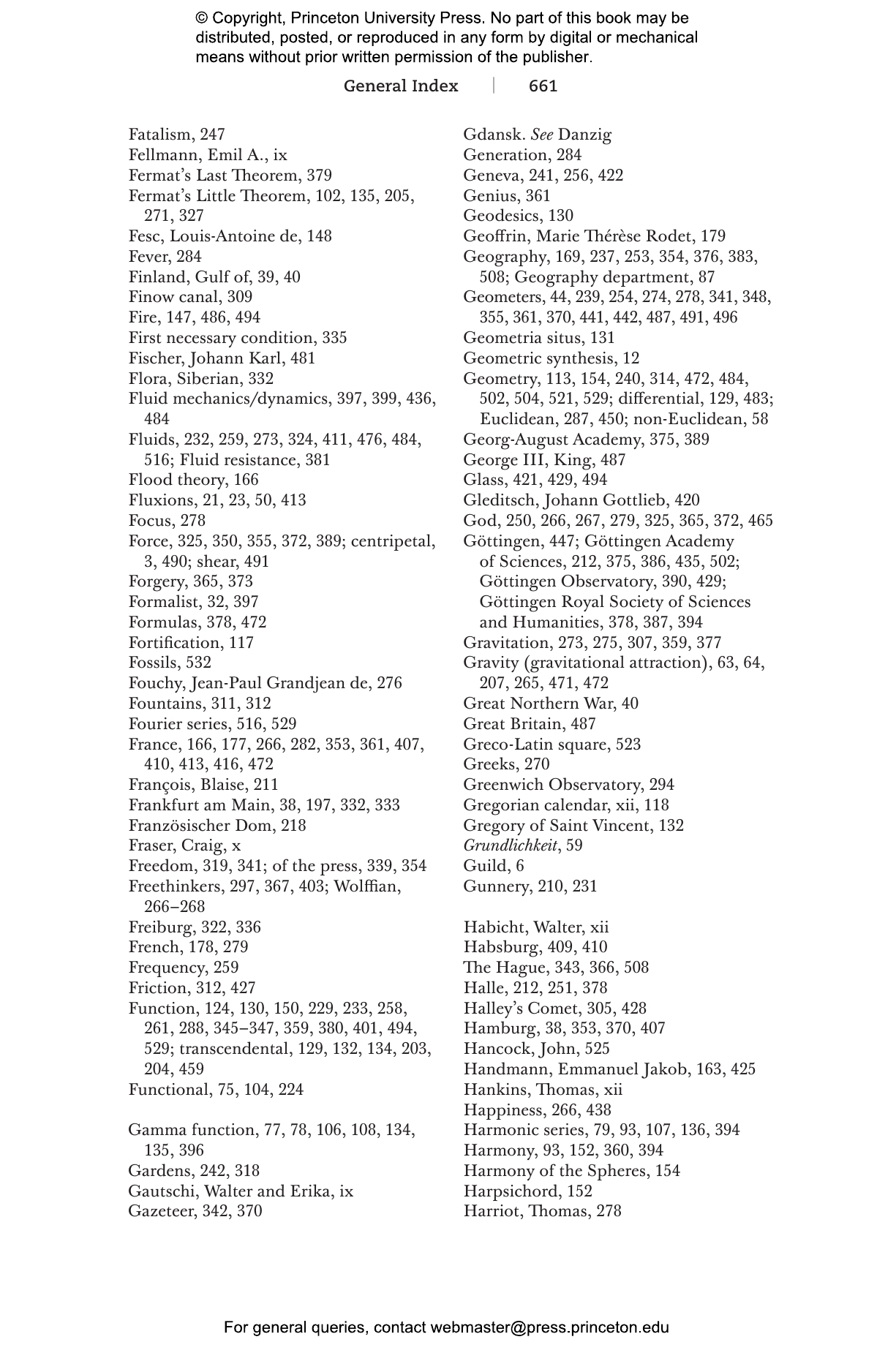 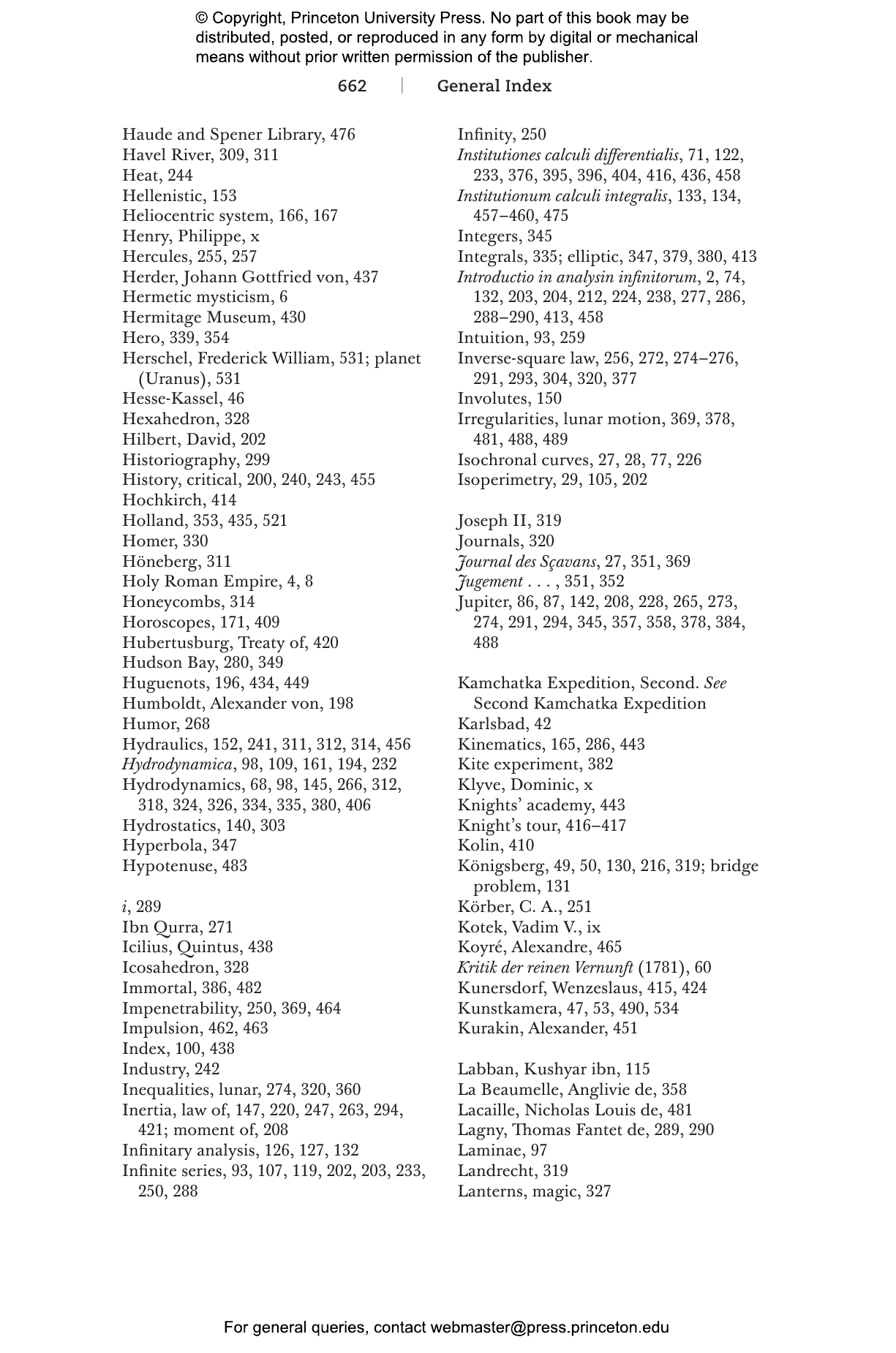 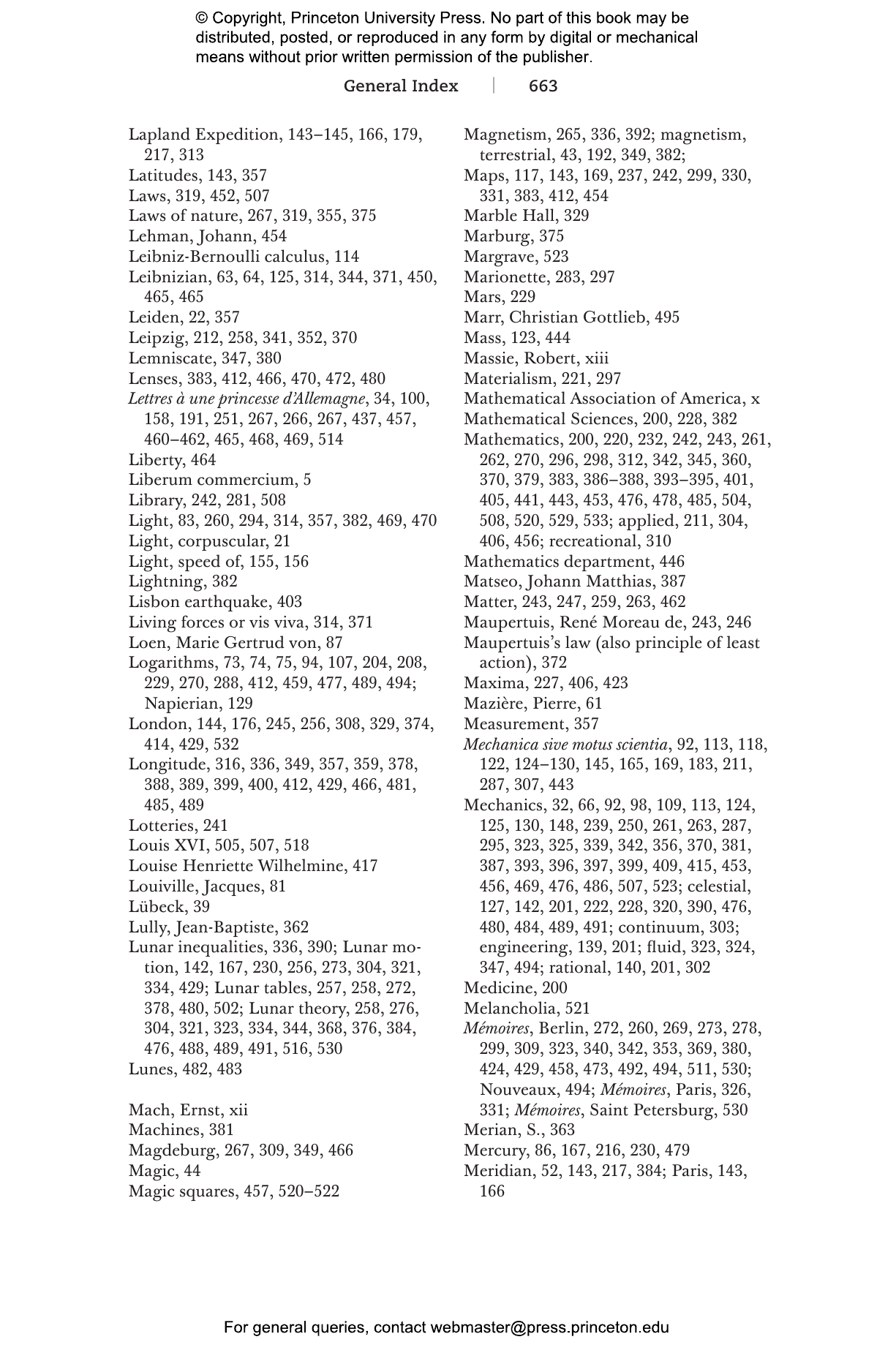 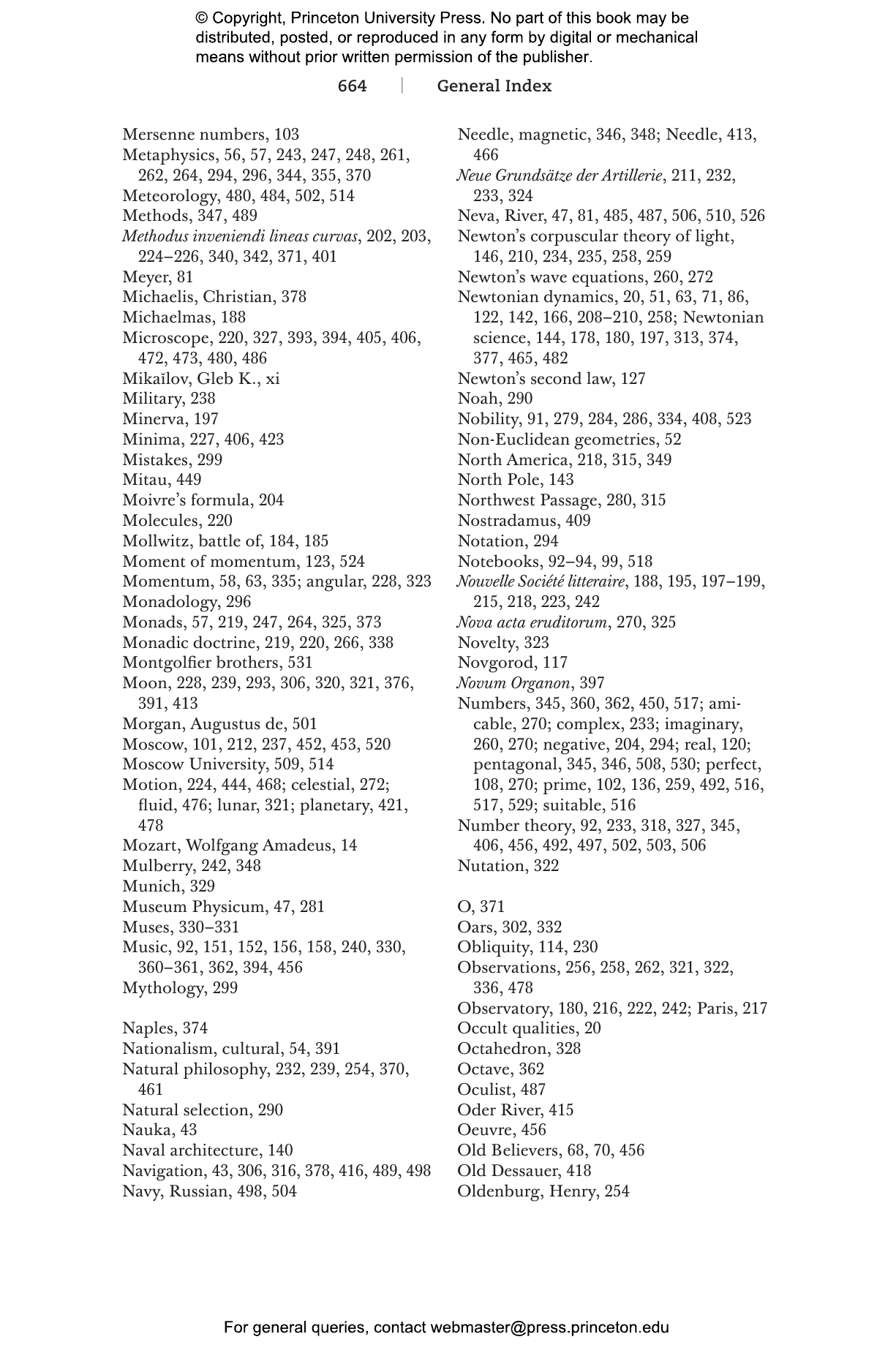 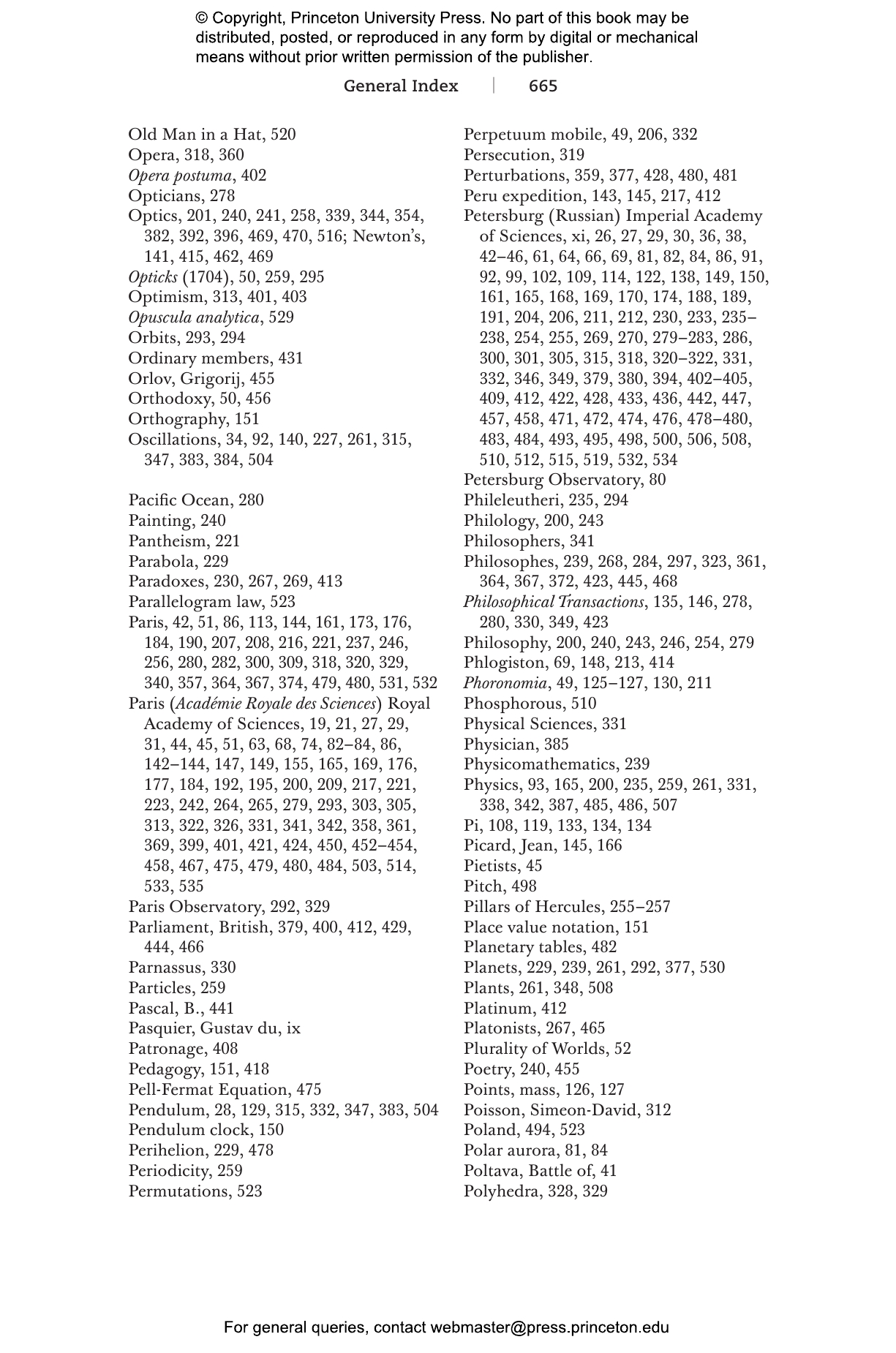 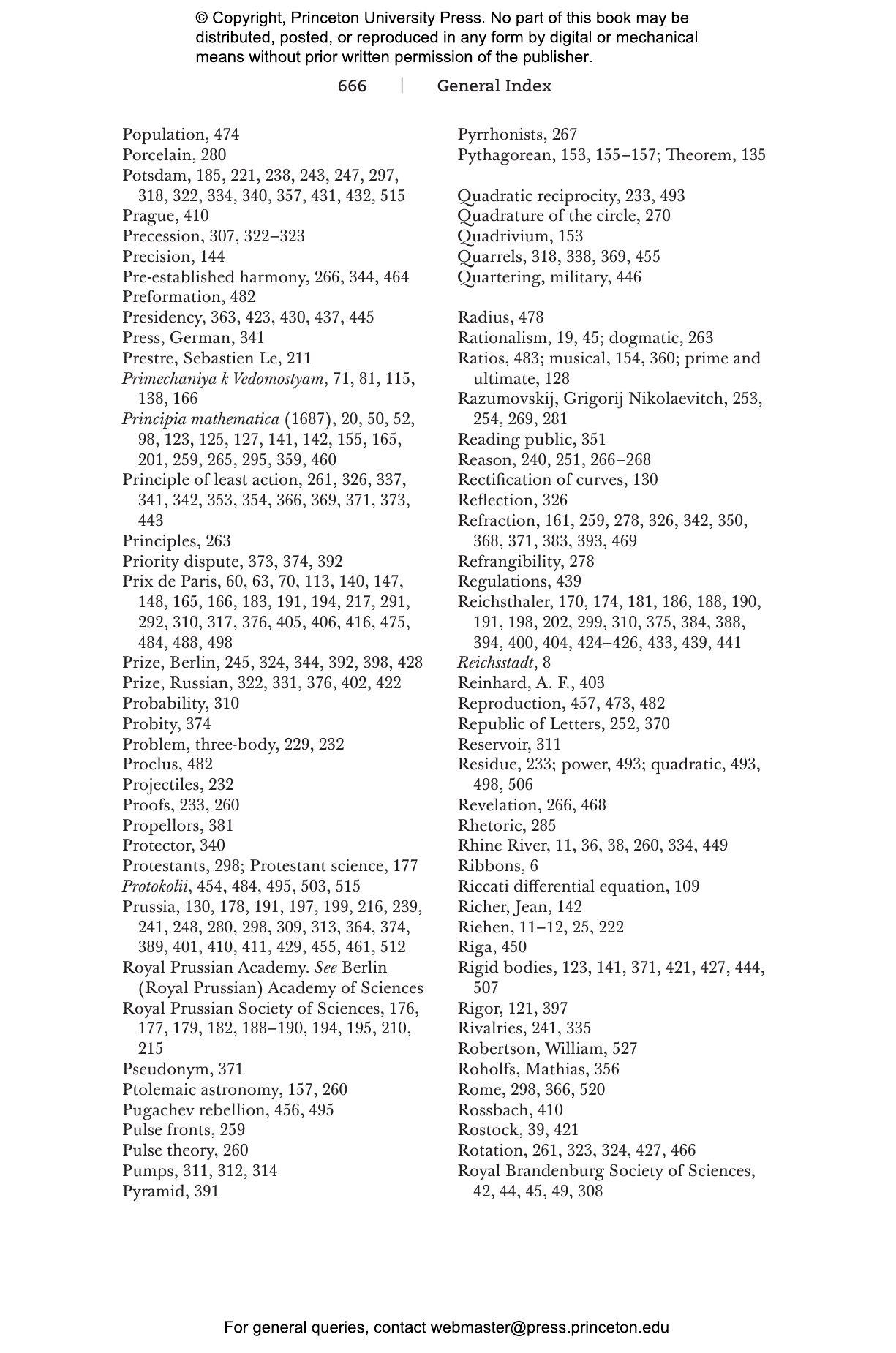 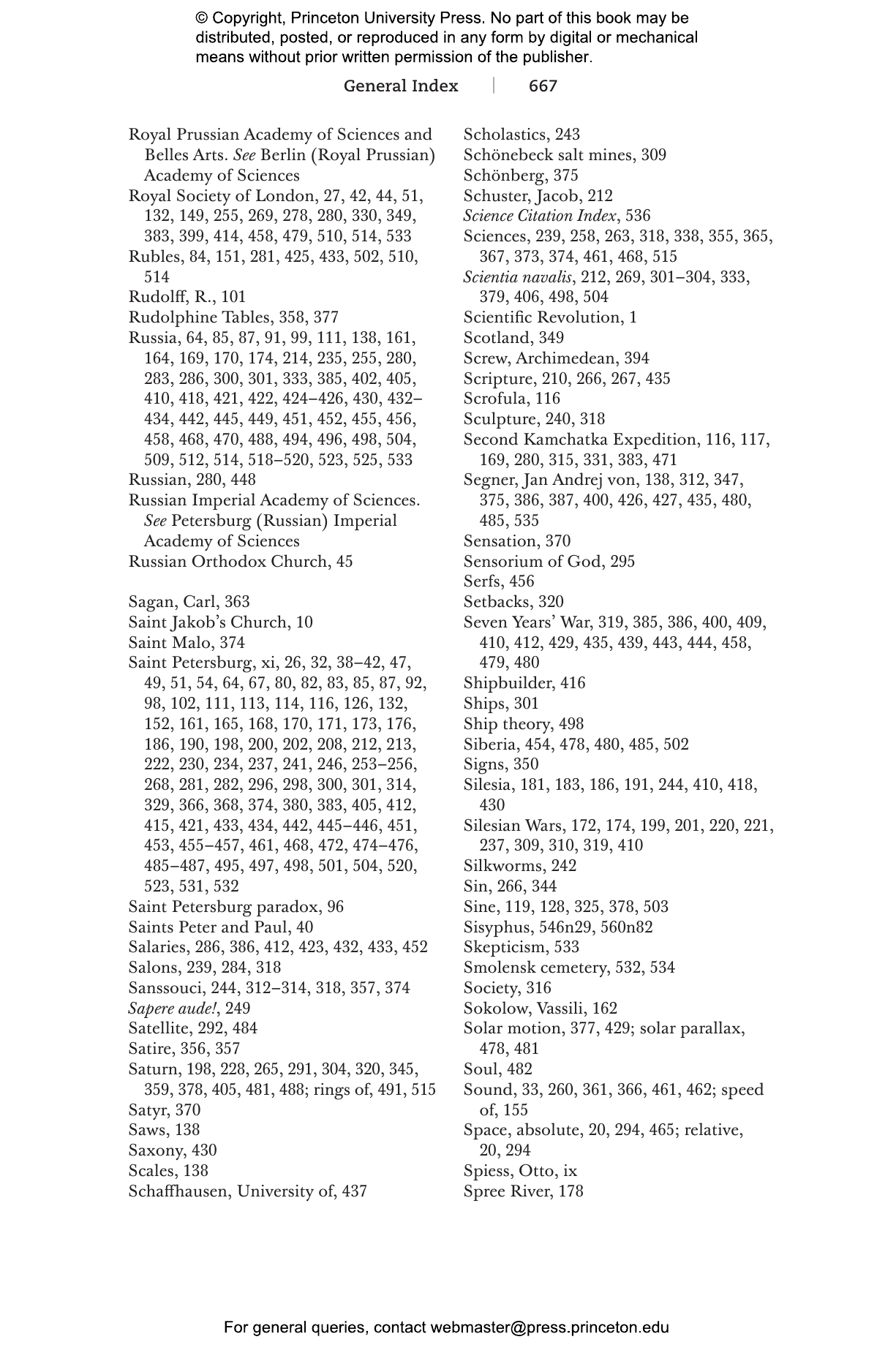 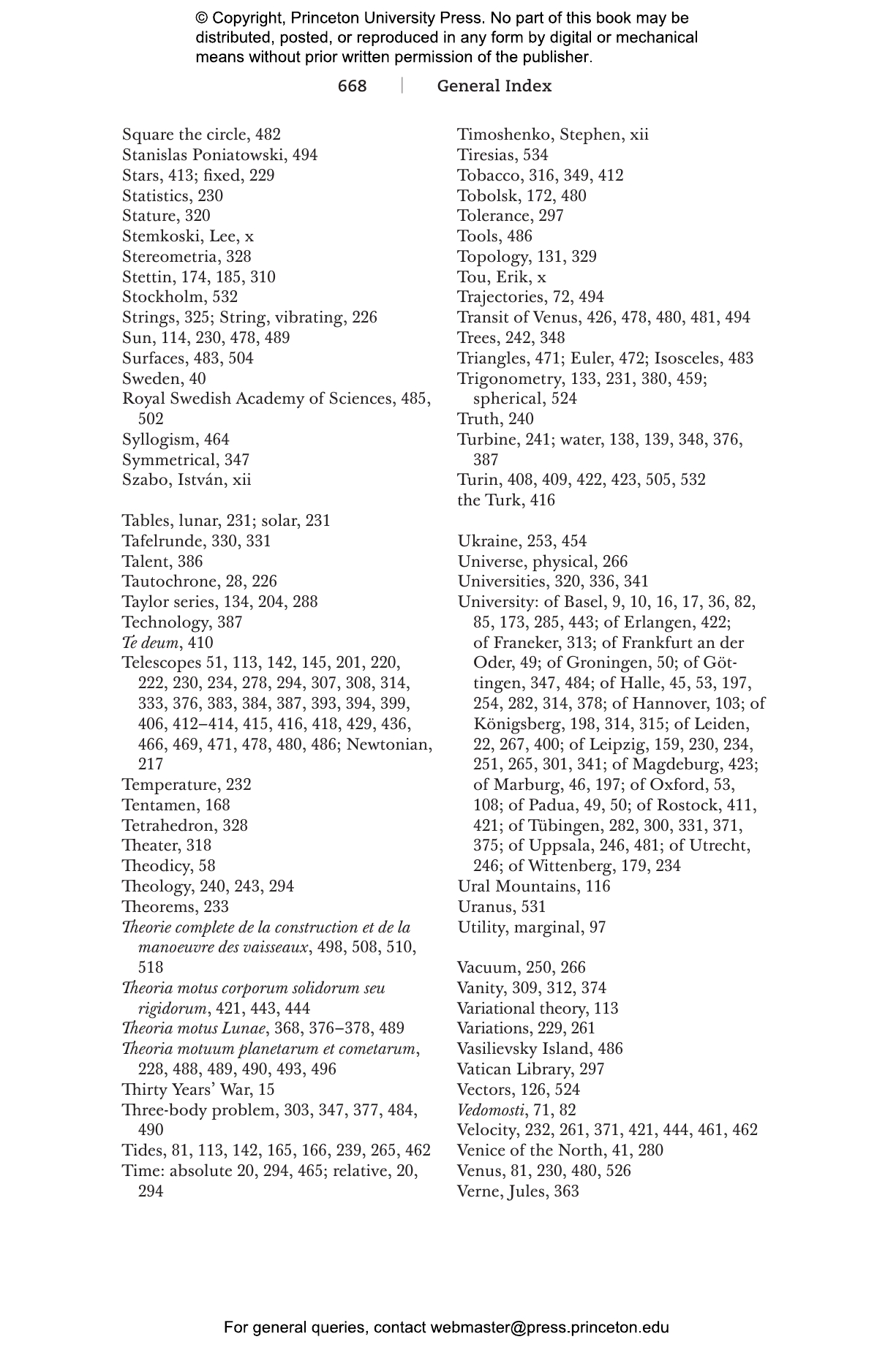 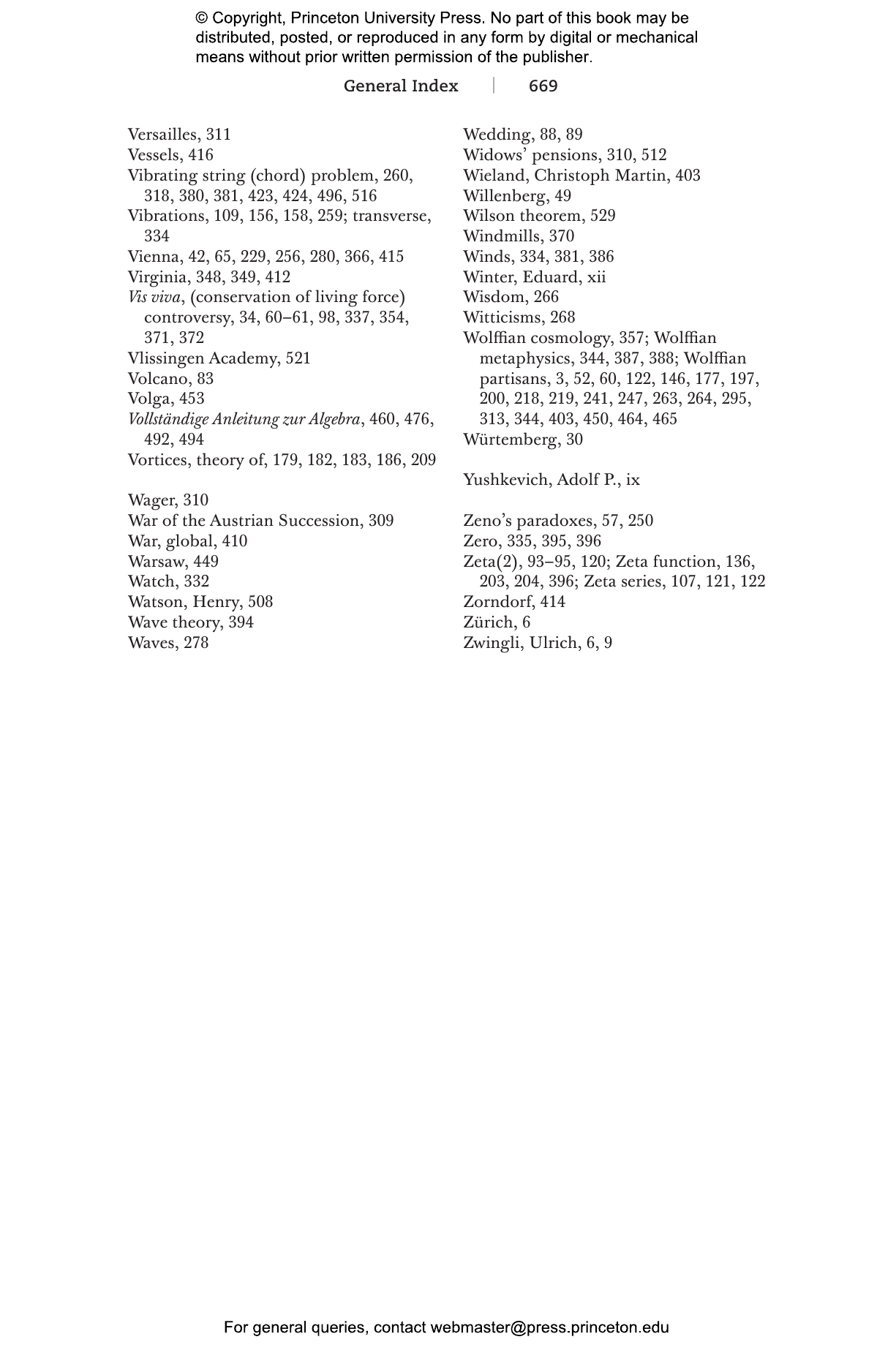 An acclaimed biography of the Enlightenment's greatest mathematician 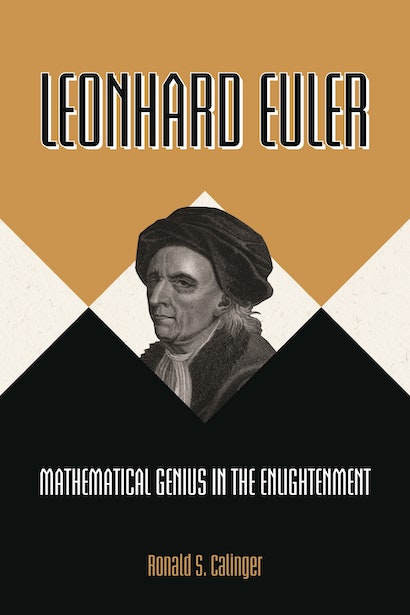 This is the first full-scale biography of Leonhard Euler (1707–83), one of the greatest mathematicians and theoretical physicists of all time. In this comprehensive and authoritative account, Ronald Calinger connects the story of Euler’s eventful life to the astonishing achievements that place him in the company of Archimedes, Newton, and Gauss. Drawing chiefly on Euler’s massive published works and correspondence, which fill more than eighty volumes so far, this biography sets Euler’s work in its multilayered context—personal, intellectual, institutional, political, cultural, religious, and social. It is a story of nearly incessant accomplishment, from Euler’s fundamental contributions to almost every area of pure and applied mathematics—especially calculus, number theory, notation, optics, and celestial, rational, and fluid mechanics—to his advancements in shipbuilding, telescopes, ballistics, cartography, chronology, and music theory.

The narrative takes the reader from Euler’s childhood and education in Basel through his first period in St. Petersburg, 1727–41, where he gained a European reputation by solving the Basel problem and systematically developing analytical mechanics. Invited to Berlin by Frederick II, Euler published his famous Introductio in analysin infinitorum, devised continuum mechanics, and proposed a pulse theory of light. Returning to St. Petersburg in 1766, he created the analytical calculus of variations, developed the most precise lunar theory of the time that supported Newton’s dynamics, and published the best-selling Letters to a German Princess—all despite eye problems that ended in near-total blindness. In telling the remarkable story of Euler and how his achievements brought pan-European distinction to the Petersburg and Berlin academies of sciences, the book also demonstrates with new depth and detail the central role of mathematics in the Enlightenment.

Ronald S. Calinger is professor emeritus of history at the Catholic University of America and the founding chancellor of the Euler Society. His books include A Contextual History of Mathematics, Vita Mathematica, and Classics of Mathematics.

"Ronald Calinger's impressively detailed biography memorably portrays an extraordinarily able scientist rather than a hero of the Enlightenment as it is conventionally conceived."—Ulinka Rublack, Times Literary Supplement

"Leonhard Euler, written by historian of mathematics Ronald Calinger, is perhaps the first biography that attempts to offer a panoramic view of this immense body of work. . . . This impressively researched tome will be of great value to anyone with a serious interest in the history of mathematics and the Enlightenment."—Davide Castelvecchi, Nature

"[A]n impressive work of scientific biography. . . . A fascinating portrait of Euler, his work and the world around him."—The Economist

"The book is so rich in information that it makes it the best reference work on Euler that is currently available. . . . This book will be a standard for many years to come."—Adhemar Bultheel, European Mathematical Society

"This work befits Leonhard Euler, one of the greatest mathematicians ever, and fills in details that raise his stature even further. Calinger is respected for his texts that explore the history of mathematics. This focused effort is his best! Calinger successfully embeds Euler's mathematical and physics results in a rich context—cultural, political, religious, and intellectual—while providing great insight into Euler as a person. . . . Read this book about Euler and be enlightened!"—Choice

"This biography gives a complete picture of the person Euler and his scientific work. For the interested reader a must."—Eos

"The present monograph is an important contribution on Euler's life and on his achievements in various areas of human knowledge, being of interest to all people interested in the development of science in historical perspective."—S. Cobza¸, Studia Universitatis Babes-Bolyai Methematica

"The text is clear; the book is a pleasure to read and will be easy to use. It weaves together Euler's personal life, his education, and his activities in the intellectual life of the eighteenth century, noting the intrusion of events beyond his control. . . . Almost everything is included, from Euler’s simplest work and elementary teaching to his most insightful and influential papers and books. At every stage, we get a succinct account of what Euler did and why it mattered. . . . The book should be read by every historian of modern science, and it will form the basis for a new generation of Euler scholarship."—Jeremy Gray, Isis

"The author deserves praise for tackling such a serious project with huge amounts of detailed and complex material. . . . An excellent reference resource on all matters related to Euler’s life and work."—Ciarán Mac an Bhaird, London Mathematical Society Newsletter

"This wonderful book is highly recommended not only for history of mathematics scholars but also for mathematics teachers as well as for the general public. It leaves one with a sense of awe and admiration for the genius of who Leonhard Euler was."—Michael de Villers, European Legacy

"This is the first real biography of Leonhard Euler, and I don't think it's an exaggeration to say that it is the most important book about Euler to appear in any western European language in the past century. The scholarship is absolutely first rate and is based largely on original sources, a monumental feat. Many of the details are new, but so is the grand synthesis that puts them together in one narrative. I learned something new from almost every page."—Dominic Klyve, Central Washington University

"Comprehensive and thorough, this study of the life, work, and times of Leonhard Euler is written in an accessible style and strikes the right balance between his technical accomplishments and historical context. This will be a standard, foundational work on which all future scholarship on Euler, eighteenth-century mathematics and science, and indeed Enlightenment intellectual life will rest."—Kathryn M. Olesko, Georgetown University

"This will be the authoritative work on Euler's life. Embodying a great deal of research and information, the book provides a complete biography, connecting the year-by-year circumstances of Euler's life with his scientific work. One of the book's strengths is its account of the personal, institutional, and political milieu that formed the context of Euler's career."—Craig Fraser, University of Toronto