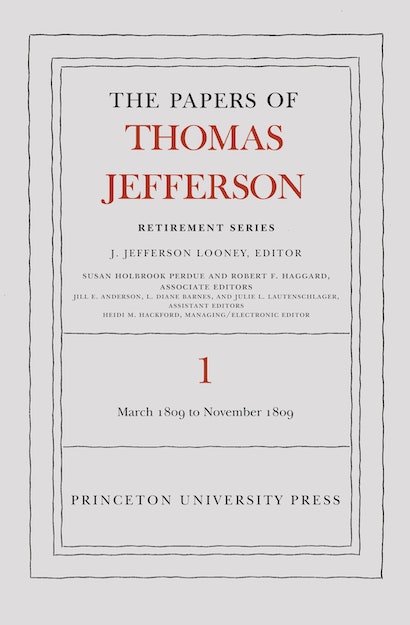 This volume inaugurates the definitive edition of papers from Thomas Jefferson’s retirement. As the volume opens, a new president is installed and Jefferson is anticipating his return to Virginia, where he will pursue a fascinating range of personal and intellectual activities. He prepares for his final departure from Washington by settling accounts and borrowing to pay his creditors. At Monticello he tells of his efforts to restore order at his mismanaged mill complex, breed merino sheep, and otherwise resume full control of his financial and agricultural affairs.


Though he is entering retirement, he still has one foot firmly planted in the world of public affairs. He acknowledges a flood of accolades on his retirement and has frequent exchanges with President James Madison. While fielding written requests for money, favors, and advice from a kaleidoscopic array of relatives, acquaintances, strangers, cranks, anonymous writers, and a blackmailer, he maintains a wide and varied correspondence with scientists and scholars on both sides of the Atlantic.


The volume’s highlights include first-hand accounts of Jefferson’s demeanor at his successor’s inauguration and one of the most detailed descriptions of life at Monticello by a visitor; Jefferson’s recommendations on book purchases to a literary club and a teacher; chemical analyses of tobacco by a French scientist that first isolated nicotine; the earliest descriptions of the death of Meriwether Lewis; one of Jefferson’s most eloquent calls for religious tolerance; and his modest assessment of the value of his writings in reply to a printer interested in publishing them.

J. Jefferson Looney is Editor of The Papers of Thomas Jefferson: Retirement Series, sponsored by the Thomas Jefferson Foundation, Inc., Charlottesville, Virginia. He was formerly editor and project director of the Dictionary of Virginia Biography, and author or editor of several works on the history of Princeton University.

"The material is a joy to read, for the ex-president remained incredibly active and took a keen interest in the world beyond his mountaintop home. . . . [T]his [is a] magnificent endeavor."—Choice