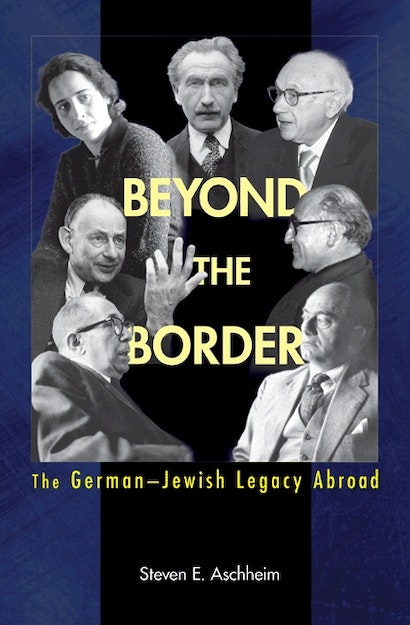 The modern German-Jewish experience through the rise of Nazism in 1933 was characterized by an explosion of cultural and intellectual creativity. Yet well after that history has ended, the influence of Weimar German-Jewish intellectuals has become ever greater. Hannah Arendt, Gershom Scholem, Theodor Adorno, Walter Benjamin, Franz Rosenzweig, and Leo Strauss have become household names and possess a continuing resonance. Beyond the Border seeks to explain this phenomenon and analyze how the German-Jewish legacy has continuingly permeated wider modes of Western thought and sensibility, and why these émigrés occupy an increasingly iconic place in contemporary society.


Steven Aschheim traces the odyssey of a fascinating group of German-speaking Zionists — among them Martin Buber and Hans Kohn — who recognized the moral dilemmas of Jewish settlement in pre-Israel Palestine and sought a binationalist solution to the Arab-Israel conflict. He explores how German-Jewish émigré historians like Fritz Stern and George Mosse created a new kind of cultural history written against the background of their exile from Nazi Germany and in implicit tension with postwar German social historians. And finally, he examines the reasons behind the remarkable contemporary canonization of these Weimar intellectuals — from Arendt to Strauss — within Western academic and cultural life.

Beyond the Border is about more than the physical act of departure. It also points to the pioneering ways these émigrés questioned normative cognitive boundaries and have continued to play a vital role in addressing the predicaments that engage and perplex us today.

Steven E. Aschheim holds the Vigevani Chair of European Studies at the Hebrew University of Jerusalem. His books include Scholem, Arendt, Klemperer: Intimate Chronicles in Turbulent Times, In Times of Crisis: Essays on European Culture, Germans, and Jews, and The Nietzsche Legacy in Germany: 1890-1990.

"Beyond the Border is a study of the influence of German-Jewish exiles.... It raises fundamental issues about the role of Jews in the diaspora and their relationship with Israel."—Vernon Bogdanoris, The Jewish Chronicle

"[A] brilliant analysis. . . . This excellent and fascinating anthology is a landmark publication for the study of Hebrew and Jewish literature in the English-speaking world."—Tim Murphy, European Legacy

"This volume of essays is vintage Steven Aschheim: a sweeping erudition animated by expository verve and sparkling insights. What emerges from these deft and compelling studies is a clear sense that the German-Jewish legacy had a vibrant afterlife in its various diasporas. Aschheim seeks to explain why."—Paul Mendes-Flohr, University of Chicago