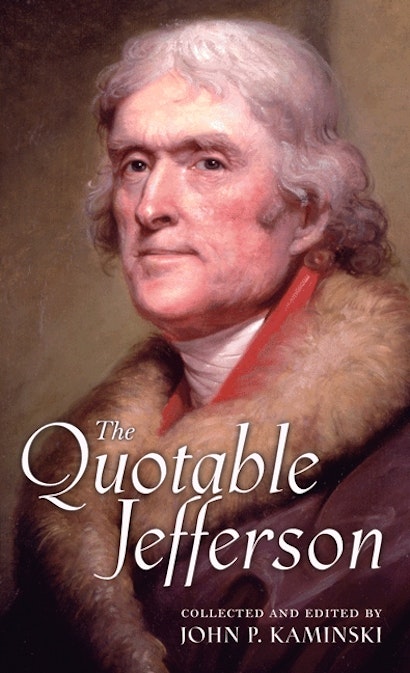 More than any other Founding Father, Thomas Jefferson made his reputation on the brilliance of his writing. John Adams chose the 33-year-old Jefferson to draft the Declaration of Independence largely because of his “masterly Pen.” The genius of the Declaration and Jefferson’s later writings amply confirmed Adams’s judgment. Few writers have said so much on so many subjects — and said it so well — as Jefferson. The Quotable Jefferson — the most comprehensive and authoritative book of Jefferson quotations ever published — demonstrates that as does no other book.


Drawing primarily on The Papers of Thomas Jefferson, published by Princeton University Press, John Kaminski has carefully collected and cleverly arranged Jefferson’s pronouncements on almost 500 subjects, ranging from the profound and public — the Constitution — to the personal and peculiar — cold water bathing.


This book will delight the casual reader and browser, but it is also a serious and carefully edited reference work. Whatever the subject, if Jefferson said something memorable about it, you are likely to find it here.

John P. Kaminski is the founder and director of the Center for the Study of the American Constitution in the Department of History at the University of Wisconsin, Madison. He is the director and coeditor of The Documentary History of the Ratification of the Constitution (nineteen volumes to date). He has written or edited sixteen other books, including three on Thomas Jefferson.

"John P. Kaminski's work, the product of many years research and laborious editing, will help to familiarize readers with the world view of Jefferson, while placing his words in the correct context. The work, even in the light of the volumes on Jefferson already at hand, is a welcome addition for those wanting to understand the man in his own word."—Patrick McNamara, National Conservative Weekly

"This is an elegant collection of quotations. . . . For those who enjoy their history in tasty tidbits and colorful personal language, this is a great book to dip into."—Edmonton Journal

"This book will delight the casual reader and browser, but it is also a serious and carefully edited reference work. Whatever the subject, if Jefferson said something memorable about it, you are likely to find it here."—Spartacus Educational

"If your family library contains no volume on Jefferson, John Kaminski's The Quotable Jefferson would be the perfect place to start. Every quotation is attributed to its source and it seems impossible that any reader who browses these pages would not be enticed to go more deeply into the life and history of Thomas Jefferson and in doing so, into the very heart of the nation of which he was so able a founder."—Mary Garrett, The Advocate

"Succeeding admirably in condensing the best quotes from around twenty thousand letters, this book will awaken some readers to the wit and wisdom of Jefferson, and enable others to rediscover it. Here is Jefferson in his own words, without historians acting as intermediaries. It is very fortunate to have an editor of John Kaminski's caliber produce such an accessible and useful volume."—Andrew O'Shaughnessy, Saunders Director at the Robert H. Smith International Center for Jefferson Studies at Monticello, author of An Empire Divided

"John P. Kaminski, whose impressive editorial work places him among the most knowledgeable scholars of the founding period, has selected a highly readable and insightful collection of observations by Thomas Jefferson. True to Jefferson's brilliance and probing intellect, Kaminski organizes these materials to suit the taste of the modern reader."—Whitman H. Ridgway, University of Maryland, author of Community Leadership in Maryland, 1790-1840