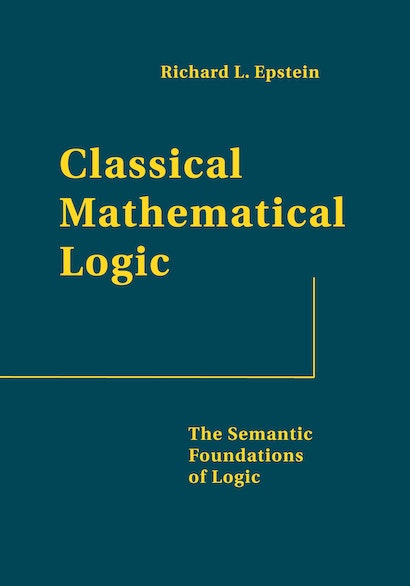 
The book provides detailed explanations of all proofs and the insights behind the proofs, as well as detailed and nontrivial examples and problems. The book has more than 550 exercises. It can be used in advanced undergraduate or graduate courses and for self-study and reference.

Classical Mathematical Logic presents a unified treatment of material that until now has been available only by consulting many different books and research articles, written with various notation systems and axiomatizations.

Richard L. Epstein received his doctorate in mathematics from the University of California, Berkeley. He is the author of eleven books, including two others in the series The Semantic Foundations of Logic (Propositional Logics and Predicate Logic), Five Ways of Saying "Therefore," Critical Thinking, and, with Walter Carnielli, Computability. He is head of the Advanced Reasoning Forum in Socorro, New Mexico.

"[Richard Epstein] never gives only the technical side of the matter, but...always offers intuitive motivations and explains basic decisions which constitute the whole approach, and which build a bridge to the students' experiences, with natural language as well as with standard 'elementary' mathematics. The book is a self-contained textbook, requiring as background only some facility in mathematics...This makes the book particularly suitable as a textbook for self-study."—Siegfried J. Gottwald, Zentralblatt MATH