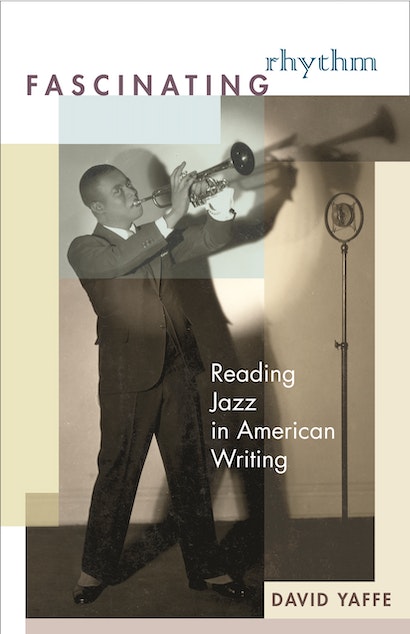 How have American writers written about jazz, and how has jazz influenced American literature? In Fascinating Rhythm, David Yaffe explores the relationship and interplay between jazz and literature, looking at jazz musicians and the themes literature has garnered from them by appropriating the style, tones, and innovations of jazz, and demonstrating that the poetics of jazz has both been assimilated into, and deeply affected, the development of twentieth-century American literature.


Yaffe explores how Jewish novelists such as Norman Mailer, J. D. Salinger, and Philip Roth engaged issues of racial, ethnic, and American authenticity by way of jazz; how Ralph Ellison’s descriptions of Louis Armstrong led to a “neoconservative” movement in contemporary jazz; how poets such as Wallace Stevens, Hart Crane, Langston Hughes, and Frank O’Hara were variously inspired by the music; and how memoirs by Billie Holiday, Charles Mingus, and Miles Davis both reinforced and redeemed the red light origins of jazz. The book confronts the current jazz discourse and shows how poets and novelists can be placed in it — often with problematic results. Fascinating Rhythm stops to listen for the music, demonstrating how jazz continues to speak for the American writer.

David Yaffe's writings have appeared in many publications, including the New Republic, The Nation, the New York Times, New York Magazine, the Boston Globe, the Village Voice, Slate, and the Chronicle of Higher Education. He is Assistant Professor of English at Syracuse University.

"This lively and provocative book exemplifies the very best of jazz writing by scholars working primarily outside the discipline of musicology."—Mervyn Cooke, Music and Letters

"David Yaffe's Fascinating Rhythm is a marvelously evocative celebration of the interrelationships between modern American writing and jazz, which is in itself the outstanding American contribution to the arts, at least since Walt Whitman. I find particularly poignant the understanding that Ralph Ellison's true sequel to his Invisible Man was his poetics of jazz."—Harold Bloom

"This is a fascinating and formidable response to Ralph Ellison's famous call for a 'jazz-shaped' reading of American literature. Yaffe's bold and often brilliant treatments of black-Jewish relations in twentieth-century U.S. culture, Ellison's own seminal works, poetry and jazz influences, and the autobiographies of Mingus, Holiday, and Miles Davis are major contributions to American and Afro-American studies."—Cornel West, Princeton University

"Fascinating Rhythm is an extremely absorbing and compelling demonstration of the key part jazz played in the construction of literary modernism. The book demonstrates an unusually mature intellectual self-possession and great analytic insight into U.S. cultural history, particularly the area of race and music. Yaffe is on his way to becoming one of the most notable public and scholarly writers of his generation."—Eric Lott, University of Virginia, author of Love and Theft: Blackface Minstrelsy and the American Working Class

"David Yaffe's Fascinating Rhythm does not simply fill a gaping vacuum in contemporary literary studies. It is likely to become the canonical text on jazz and literature, radically influencing all future writing on the subject. Each chapter is unique in its approach and sheds new light on books and poems we thought we knew."—Krin Gabbard, State University of New York

"Written with a combination of vigor and shrewdness that is rare in jazz studies, Fascinating Rhythm possesses a clarity of argument that is both inviting and provocative. Yaffe captures the flavor of the jazz musicians and writers he covers—something of the elegance of Ralph Ellison, the saltiness of Miles Davis, and the bristle and energy of Charles Mingus."—Scott Saul, University of California, Berkeley

"Yaffe is one of the best informed—probably the best—of the younger scholars working in the relationship of jazz and the arts. His writing is clear, his descriptions evocative, and his comments judicious and shrewd. This is a book that should be read by serious students of America's arts, including the jazz scholars, and those in literature, American history, and American studies."—John Szwed, Yale University