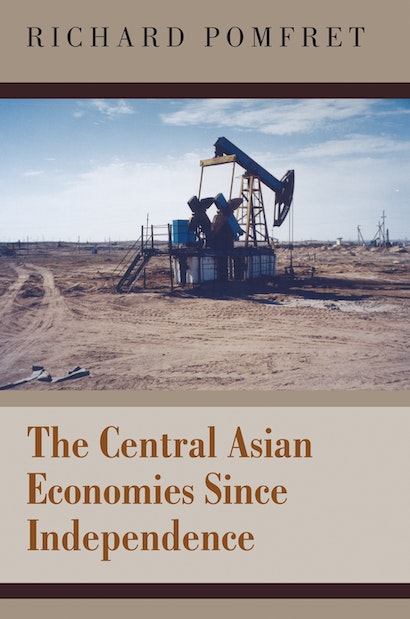 The 9/11 attacks, the U.S. invasion of Afghanistan, and the oil boom of recent years have greatly increased the strategic importance of resource-rich Central Asia, making an understanding of its economic — and therefore political — prospects more important than ever. In The Central Asian Economies Since Independence, Richard Pomfret provides a concise and up-to-date analysis of the huge changes undergone by the economies of Kazakhstan, the Kyrgyz Republic, Tajikistan, Turkmenistan, and Uzbekistan since the collapse of the Soviet Union in 1991. The book assesses the economic prospects of each country, and the likelihood that economic conditions will spur major political changes.


With independent chapters on each country, and chapters analyzing their comparative economic performance, the book highlights similarities and differences. Facing common problems caused by the breakdown of Soviet economic relations and the hyperinflation of the early 1990s, these countries have taken widely divergent paths in the transition from Soviet central planning to more market-based economies.


The book ends in 2005 with the bloodless Kyrgyz revolution and the violence in Uzbekistan, which signaled the end of the region’s political continuity. Throughout the book, Pomfret emphasizes the economic forces that foster political instability — from Kazakhstan’s resource boom and Turkmenistan’s lack of reform to Tajikistan’s abject poverty.

Richard Pomfret is Professor of Economics at the University of Adelaide, Australia. His books include The Economies of Central Asia (Princeton), Asian Economies in Transition, Consequences of Creating a Market Economy, and The Economics of Regional Trading Arrangements.

"Professor Pomfret has produced a much needed systematic account of the contemporary economies of Central Asia."—Albrecht Rothacher, American Economic Journal

"This comprehensive, fact-filled study of post-Soviet Central Asia . . . offers significant insights into these countries' different degrees of dependency on natural resource exploitation (e.g., oil and gas) and agricultural products (e.g., cotton) for integration into the global economy and for long-term economic prosperity. In the process, Pomfret carefully examines varying achievements in political transformation; ethic tensions within and between these countries; past and prospective future economic relations with Russia, China, and other neighboring nations; and numerous, but only partially successful, attempts at creating cooperative arrangements for Central Asian economic integration. . . . Highly recommended."—Choice

"There are few comprehensive accounts of economic change in Central Asia and this is a welcome addition. The book also offers interesting interpretations for these countries' individual trajectories and focuses on the key dilemmas that each country faces."—Sally N. Cummings, Slavic Review

"Richard Pomfret has produced a much needed systematic account of the contemporary economies of Central Asia. Five chapters offer individual country reports, ranging from oil-rich Kazakhstan to war ravished, impoverished Tajikistan. The volume also analyses their relative economic performances; household data identifying winners and losers of the transition; the role of essential natural resources in the region; as well as their regional and global trade patterns and policies; and their—very mixed—record of regional cooperation."—Albrecht Rothacher, Europe Asia Studies

"Richard Pomfret's book stands out as a highly professional, thoughtful, and balanced study of the economic performance of five countries of the region (Kazakhstan, Kyrgyzstan, Tajikistan, Turkmenistan, and Uzbekistan) without soundbites or the excessive dramatization that unfortunately accompanies such writing on Central Asia."—Rein Mullerson, International History Review

"This book is a must read on Central Asian economies written by one of the few experts of the economies of the region."—Gael Raballand, Central Eurasian Reader

"The Central Asian Economies Since Independence is the most reliable and comprehensive treatment of economic and public policy issues in Central Asia. It will be of value to the theoretically oriented scholar and to the practically oriented practitioner alike."—Gregory Gleason, The Russian Review

"This highly important book makes a significant contribution to the field. It will satisfy a general audience of regional specialists and will also be of great interest to economists."—Yelena Kalyuzhnova, Director of the Centre for Euro-Asian Studies, University of Reading

"This book should stand head and shoulders above any other on the same topic. I have rarely read a book that I would so enthusiastically recommend. No significant development affecting the economies of Uzbekistan, Kazakhstan, Tajikistan, the Kyrgyz Republic, and Turkmenistan between 1991 and 2004 seems to have been omitted, and the events and policies that are described are subject to critical scrutiny."—Michael Kaser, St. Antony's College, University of Oxford